New York, NY – January 23, 2018 – Every Child a Reader has revealed the official Children’s Book Week poster commemorating the 99th annual celebration of books for young people and the joy of reading, to be held April 30 – May 6. This year’s poster is designed by award-winning illustrator Jillian Tamaki.

Tamaki joins the ranks of children’s literature icons such as Ezra Jack Keats, Marsha Brown, Jerry Pinkney, Brian Selznick, Maurice Sendak, and Rosemary Wells as the designer of the Children’s Book Week poster – a tradition dating back to the program’s creation in 1919. The 2018 poster will feature the theme initiated last year with Christian Robinson’s poster – One World, Many Stories – which highlights the power of books to appeal to readers of all backgrounds. The poster was revealed by the Washington Post and will be distributed nationwide to attendees at official Book Week events in May.

“It was amazing to be the 99th (!) person to take on this venerable assignment” said Jillian Tamaki of this project. “I chose to explore the theme of globalism via animals from all around the world. I love drawing animals and most people like looking at animals. Since the poster will be up all year, my wish was to create something that was really fun to look at with lots of nooks and crannies to get lost in. Maybe you will see something the second, third, or fourth time you look at the poster that you didn’t notice the first.”

Registration to be an official event location for Children’s Book Week is now open online. As every year, schools, libraries, and bookstores across all 50 states are encouraged to host dedicated story times, activity hours, book award voting time, or author/illustrator events. In addition to receiving the Children’s Book Week poster and access to downloadable materials, which range from bookmarks with art by five prominent illustrators to an original Every Child a Reader graphic novel, all participants will be included in a national publicity campaign and listed on an online interactive map. The deadline for event location sign-up is February 9, 2018.

About Jillian Tamaki
Jillian Tamaki is an illustrator and comics artist living in Toronto. She is the co-creator, with her cousin Mariko Tamaki, of Skim and This One Summer, the latter of which won a Caldecott Honor and Printz Award in 2015. Her own graphic novels include SuperMutant Magic Academy and Boundless. Her first picture book, They Say Blue, will be released in 2018. 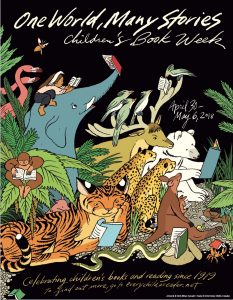