Since 1919, kids and adults have celebrated their favorite books and stories during Children’s Book Week. Now, 100 years later, Every Child a Reader invites you to celebrate with this BRAND NEW activity kit. Comics and graphic novels combine words and drawings in a unique way. In this kit, seven stellar creators call you to the world of comics and to create your own! In fact, they need your help.

Each activity in this kit is a comic story, started, but not finished by these geniuses. You complete the comics with your illustrations and your words. Blank panels follow each activity, so you can continue with their characters, or make up ones of your own.
At the end of the kit, you can draw from a comics script. And there’s space to make a comic, from start to finish! Just base it around the Children’s Book Week slogan, Read Now ● Read Forever.

We’d love to see your comics online! Please use #BookWeek100 to share them with us. 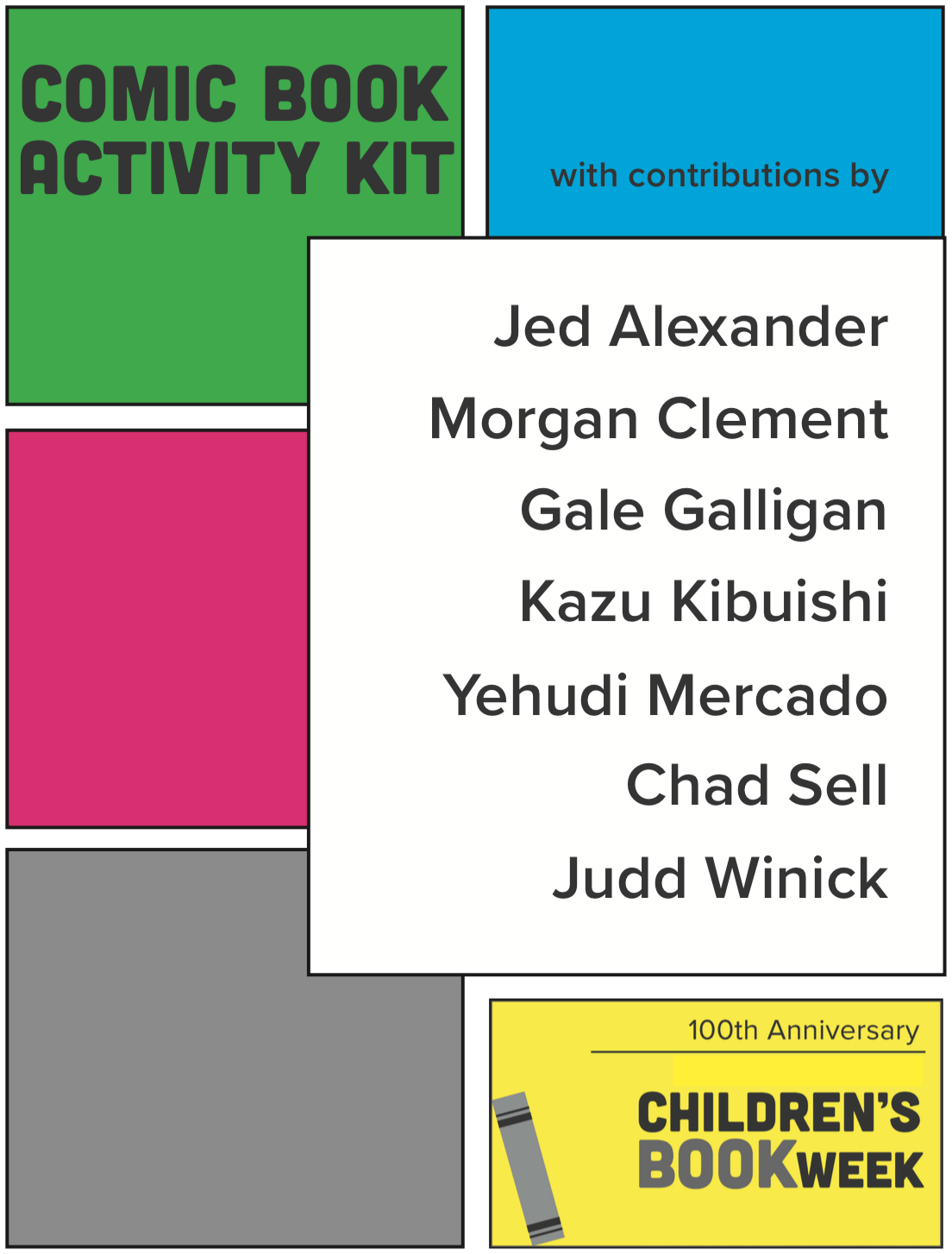 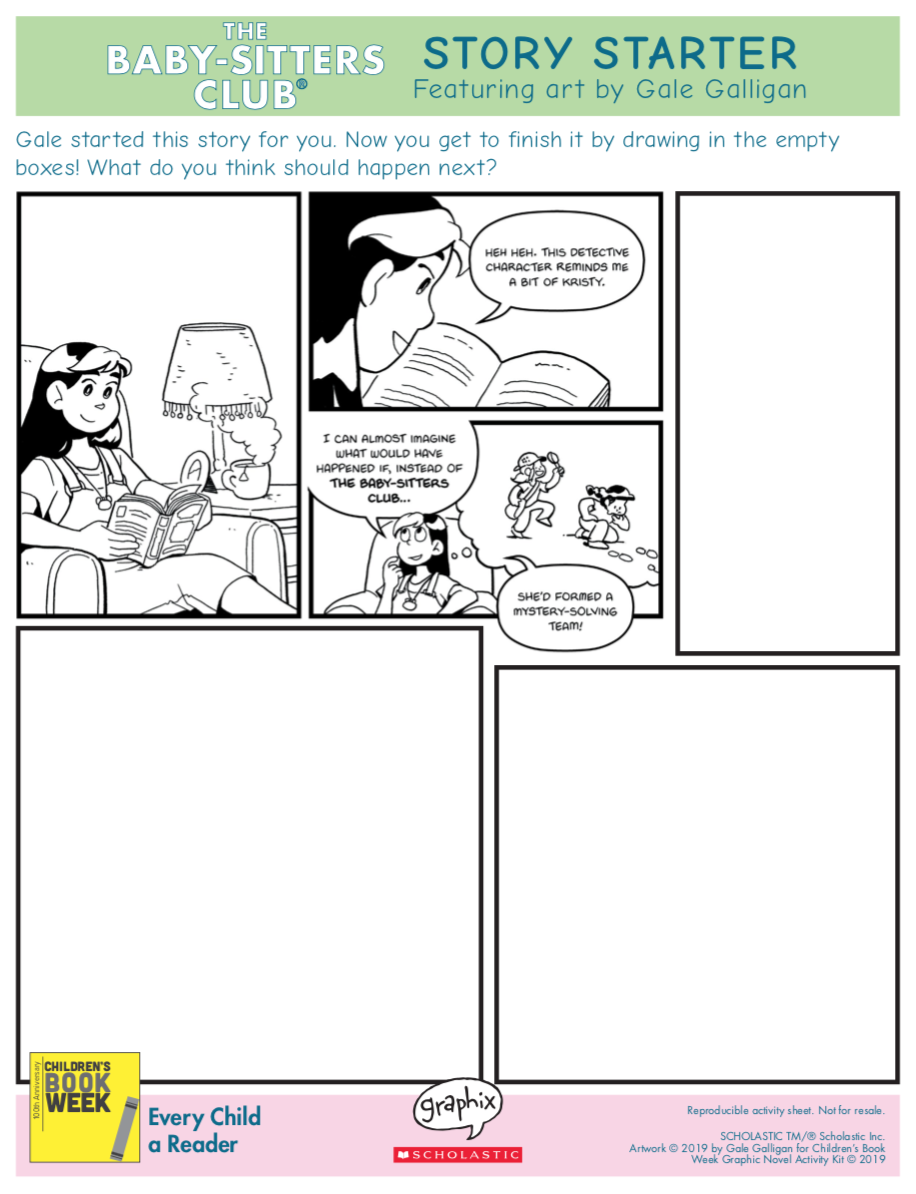 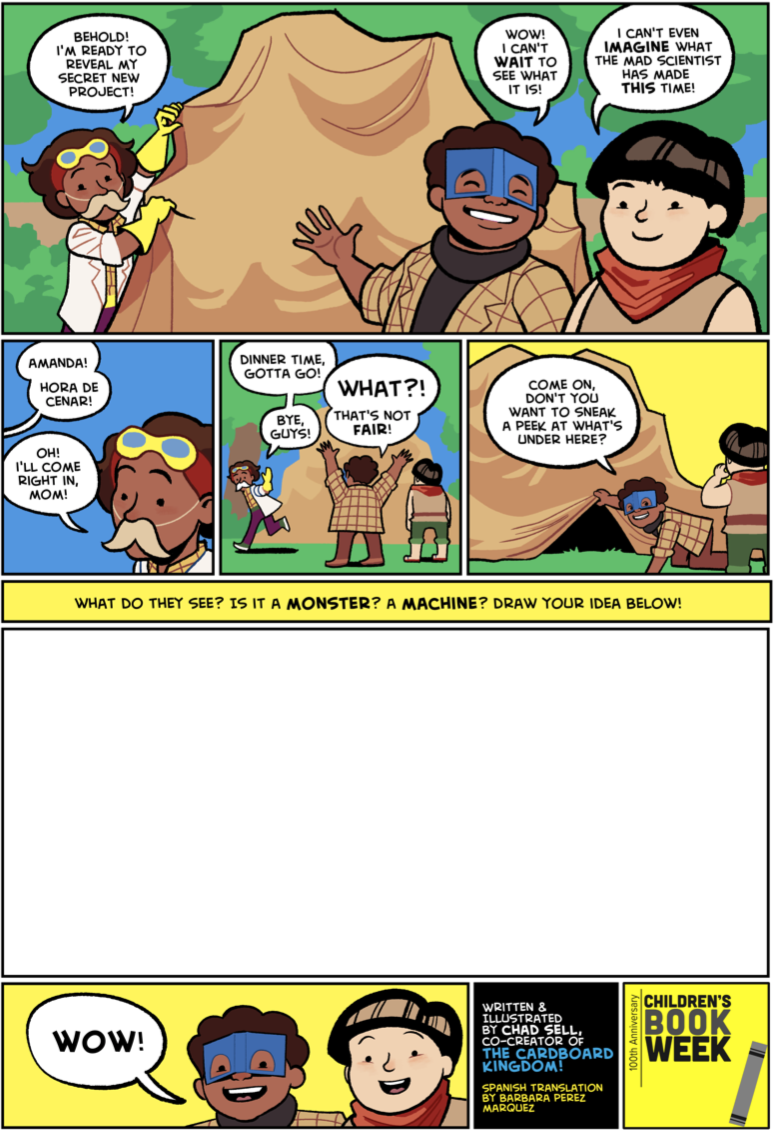 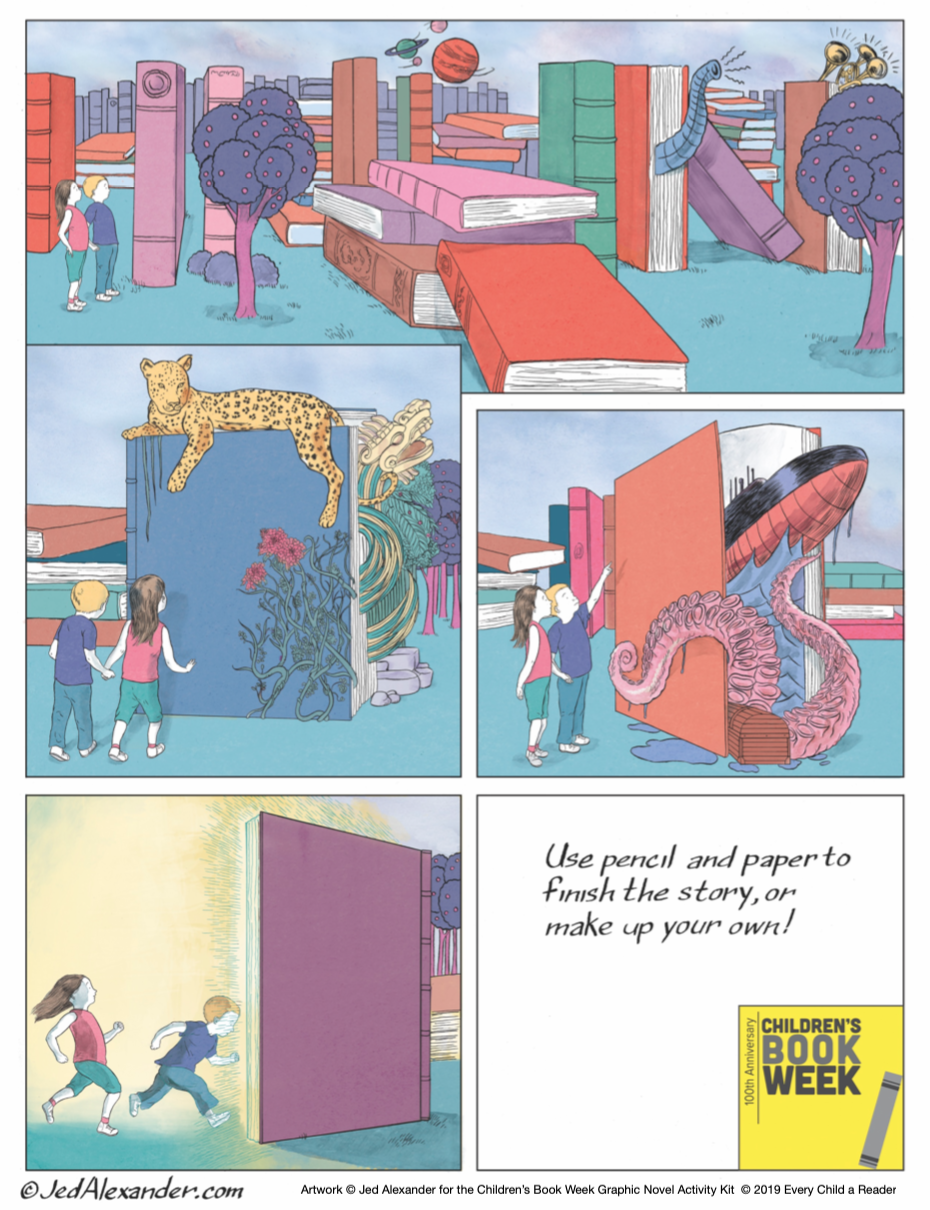 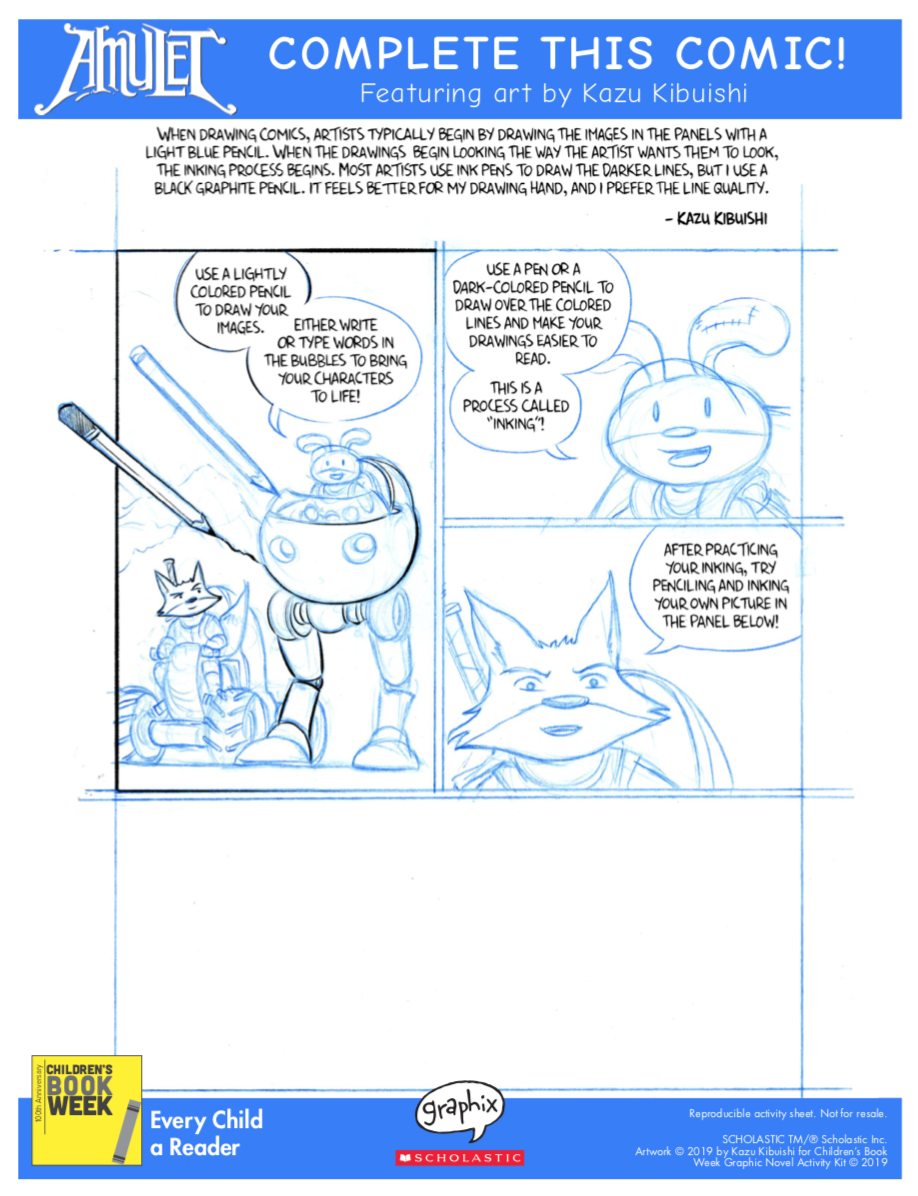 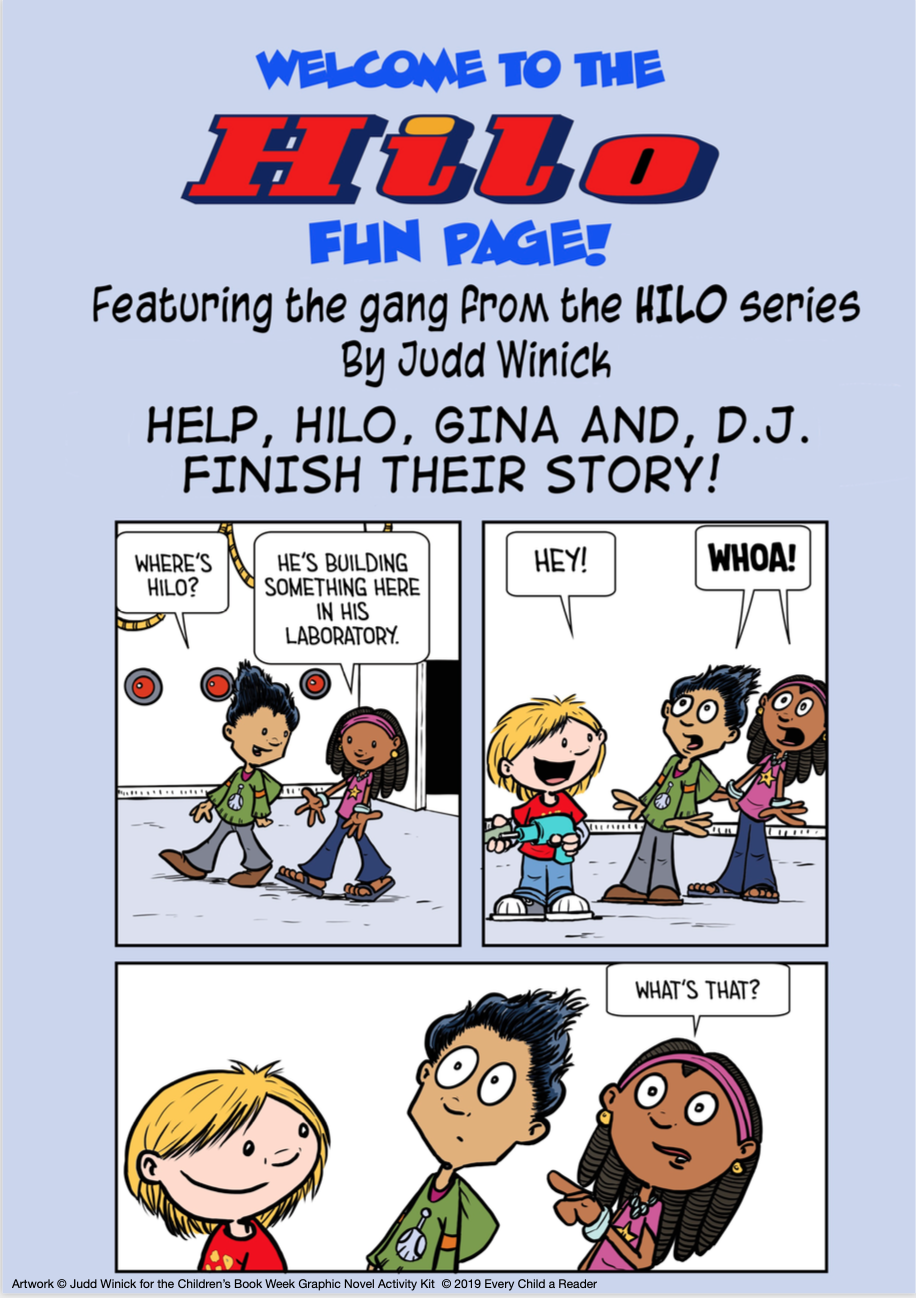 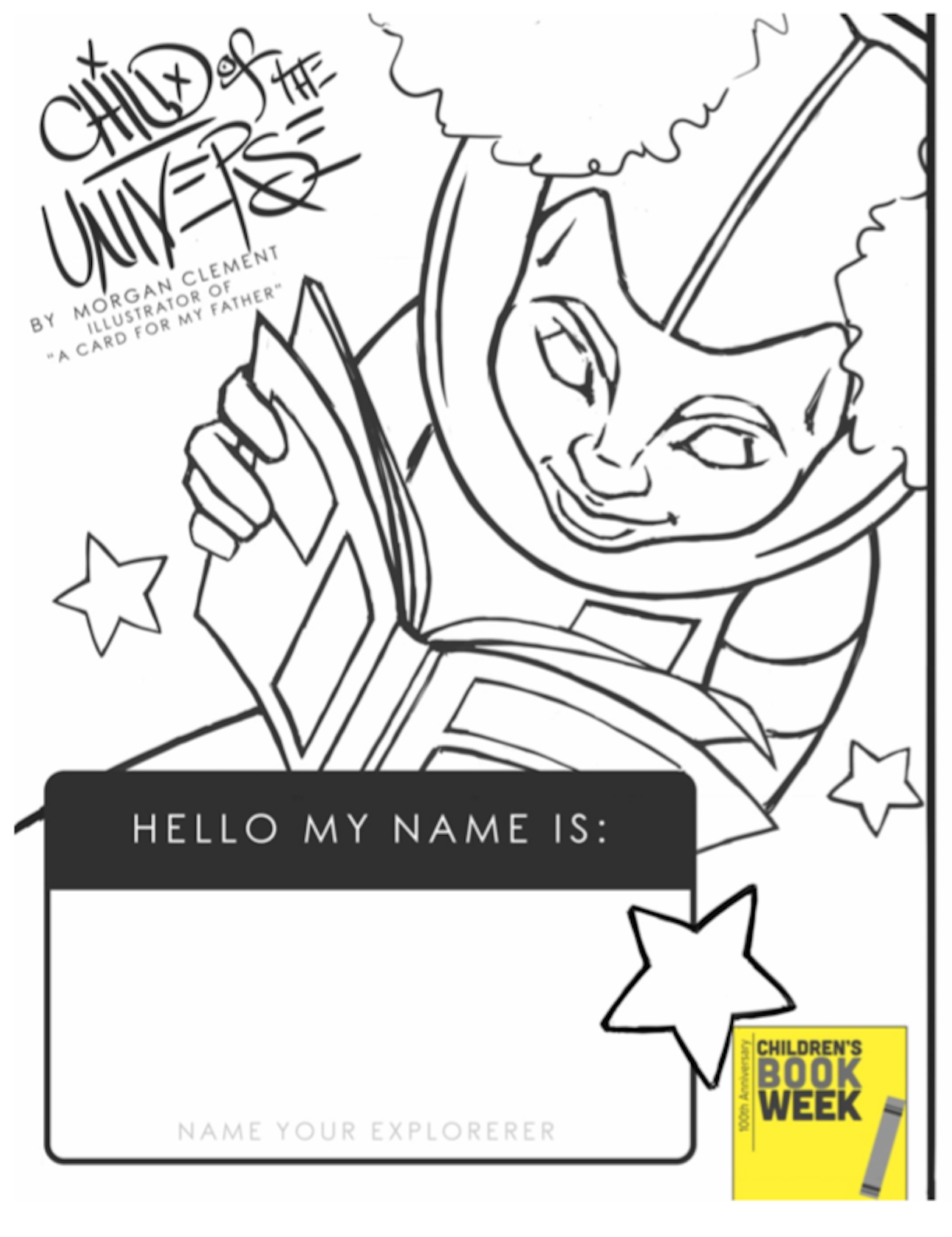 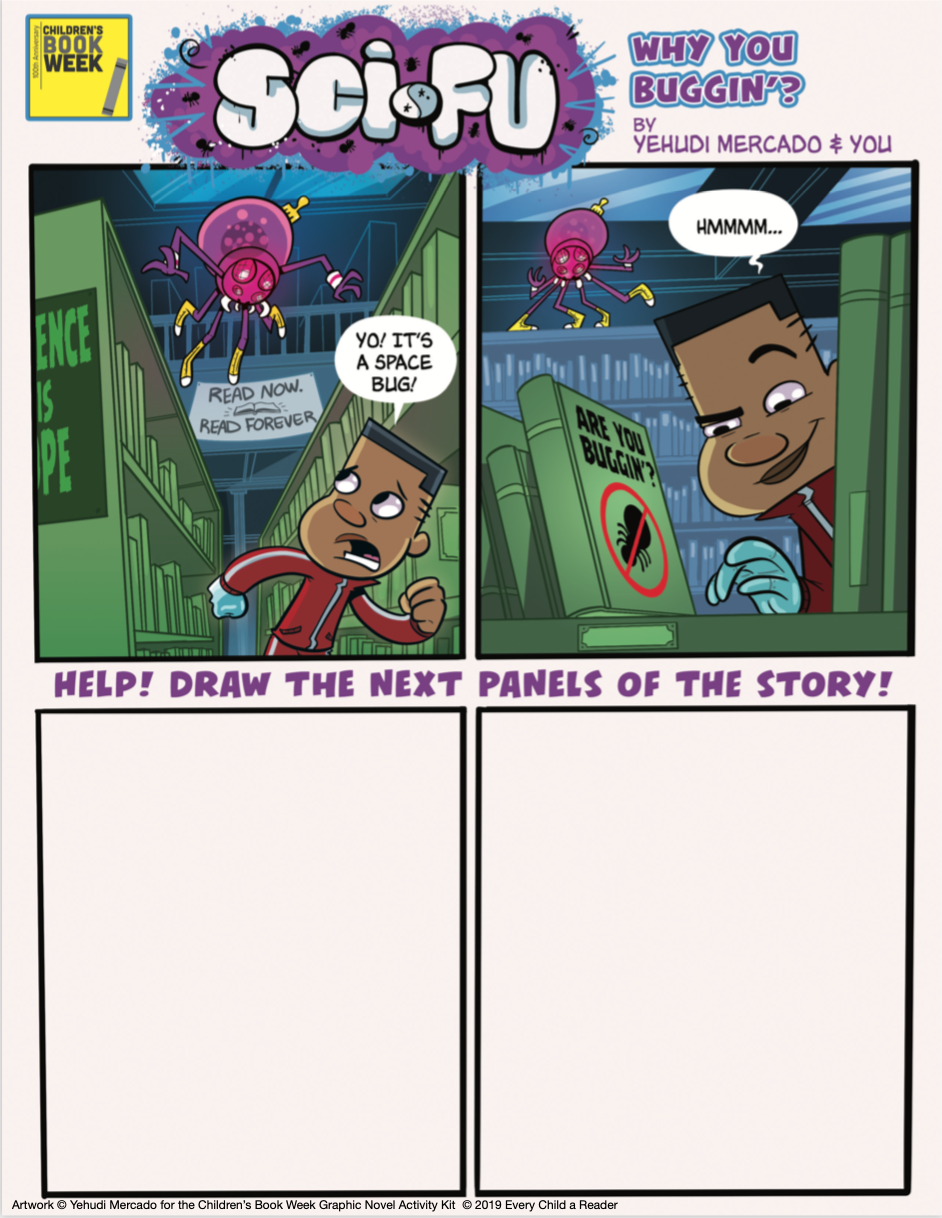 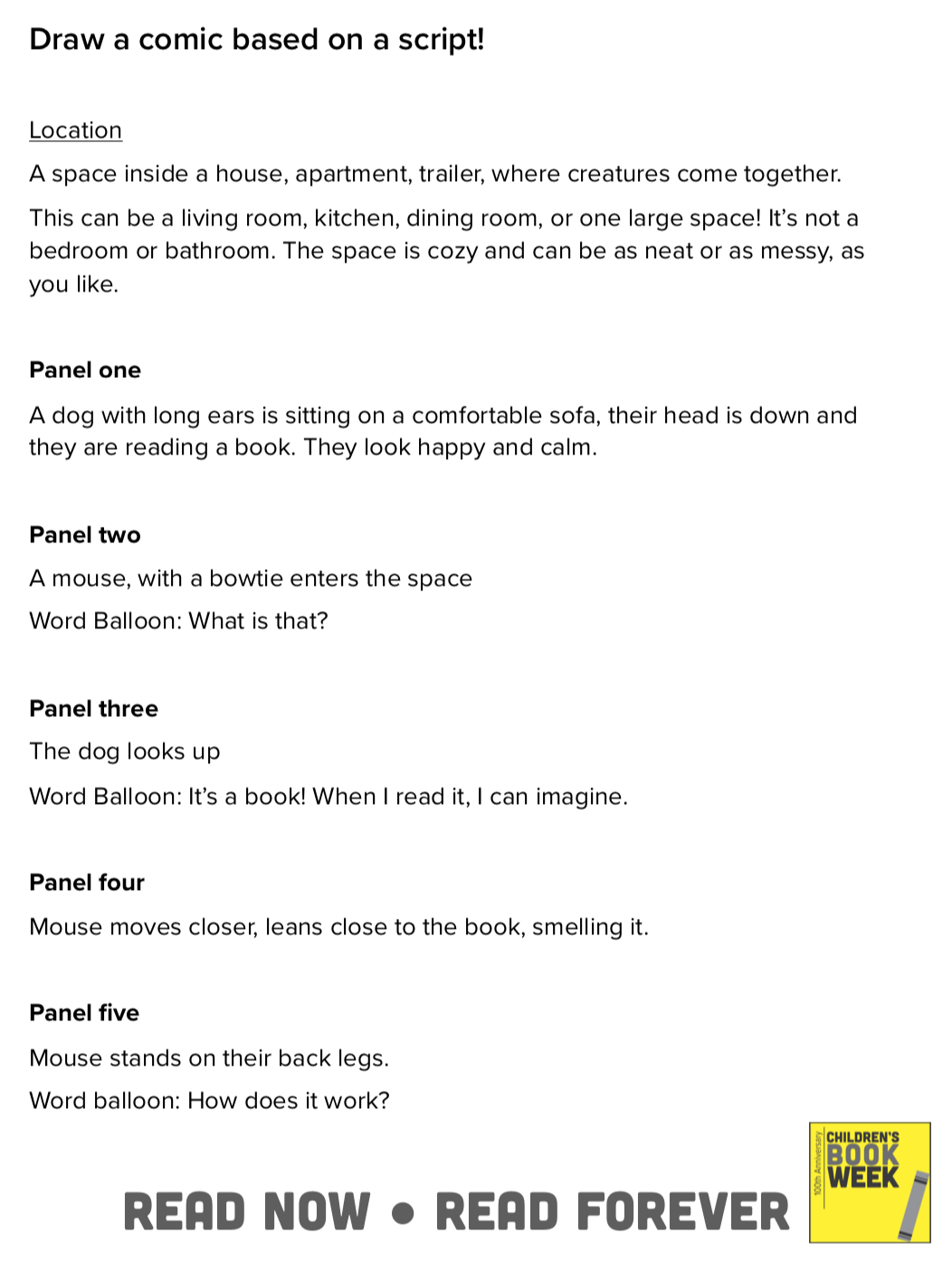 Click on the entire Comic Book Activity Kit or on each Comics Activity Page to download and print!

About this year’s comics creators

Jed Alexander (Cameron Kids)
Jed Alexander is an author and illustrator who has done work for a variety of publications, including Cricket Magazine and SpongeBob Comics. His first book for children is Red, from Cameron + Company. He lives in Davis California with his wife and best friend in the world, Regina, and the best dog in the world, Cinderpants.

Morgan Clement (Penny Candy)
Morgan Clement was born in Atlanta, GA and raised in Cleveland, OH. She enjoyed drawing from an early age and growing up was featured in district art competitions through her schools. She continued to develop her craft all the way through grade school, and graduated from Cleveland Heights High School in June of 2011, then went on to pursue a Bachelor of Fine Arts at the Savannah College of Art and Design in Savannah, GA. Morgan graduated with her BFA in May of 2015 and has been working as a Graphic Designer and Illustrator ever since. Most prominently, in May of 2018 an illustrated children’s book entitled A Card For My Father by author Samantha Thornhill was published featuring her illustrations.

Gale Galligan (Scholastic Graphix)
Gale Galligan is a graduate of NYU and the Savannah College of Art and Design. She created a USA Today bestselling graphic novel adaptation of Dawn and the Impossible Three, and her work has appeared in a number of anthologies. When Gale isn’t making comics, she enjoys knitting, reading, and spending time with her adorable pet rabbits. She lives in Pleasantville, New York. Visit her online at galesaur.com.

Kazu Kibuishi (Scholastic Graphix)
Kazu Kibuishi is the creator of the #1 New York Times bestselling Amulet series, which is available in 16 languages. He is also the creator of Copper, a collection of his popular webcomic that features an adventuresome boy-and-dog pair. Kazu also illustrated the covers of the 15th anniversary paperback editions of the Harry Potter series written by J.K. Rowling. He lives and works near Seattle, Washington, with his wife, Amy Kim Kibuishi, and their children. Visit Kazu online at boltcity.com.

Chad Sell (Random House Graphics)
Chad Sell grew up in a small town in central Wisconsin. He lived in a neighborhood much like the Cardboard Kingdom where he and his friends bounded through backyards in imaginative games and outfits! He also drew a lot and came up with all kinds of colorful characters. His favorites were often the villains, because despite being different and misunderstood, they were powerful, confident, and got the best costumes. Chad lives in Chicago with his husband and two cats.

Judd Winick (Random House Graphics)
Judd Winick lives in San Francisco with his wife, their two kids, and their cat. Judd has scripted issues of bestselling comic series, including Batman, Green Lantern, Green Arrow, Justice League, and Star Wars. Judd also appeared as a cast member of MTV’s The Real World: San Francisco and is the author of the highly acclaimed graphic novel Pedro and Me, about his Real World roommate and friend, AIDS activist Pedro Zamora. Visit Judd and Hilo online at juddspillowfort.com or find him on Twitter at @JuddWinick.