As an annual tradition of Children’s Book Week, esteemed children’s book illustrators are chosen to create bookmarks which celebrate children’s books and reading. This year, in keeping with the theme of Read. Dream. Share., seven artists have contributed their beautiful and inspiring artwork. These bookmarks are available to print and distribute to children, teens, and book lovers everywhere! 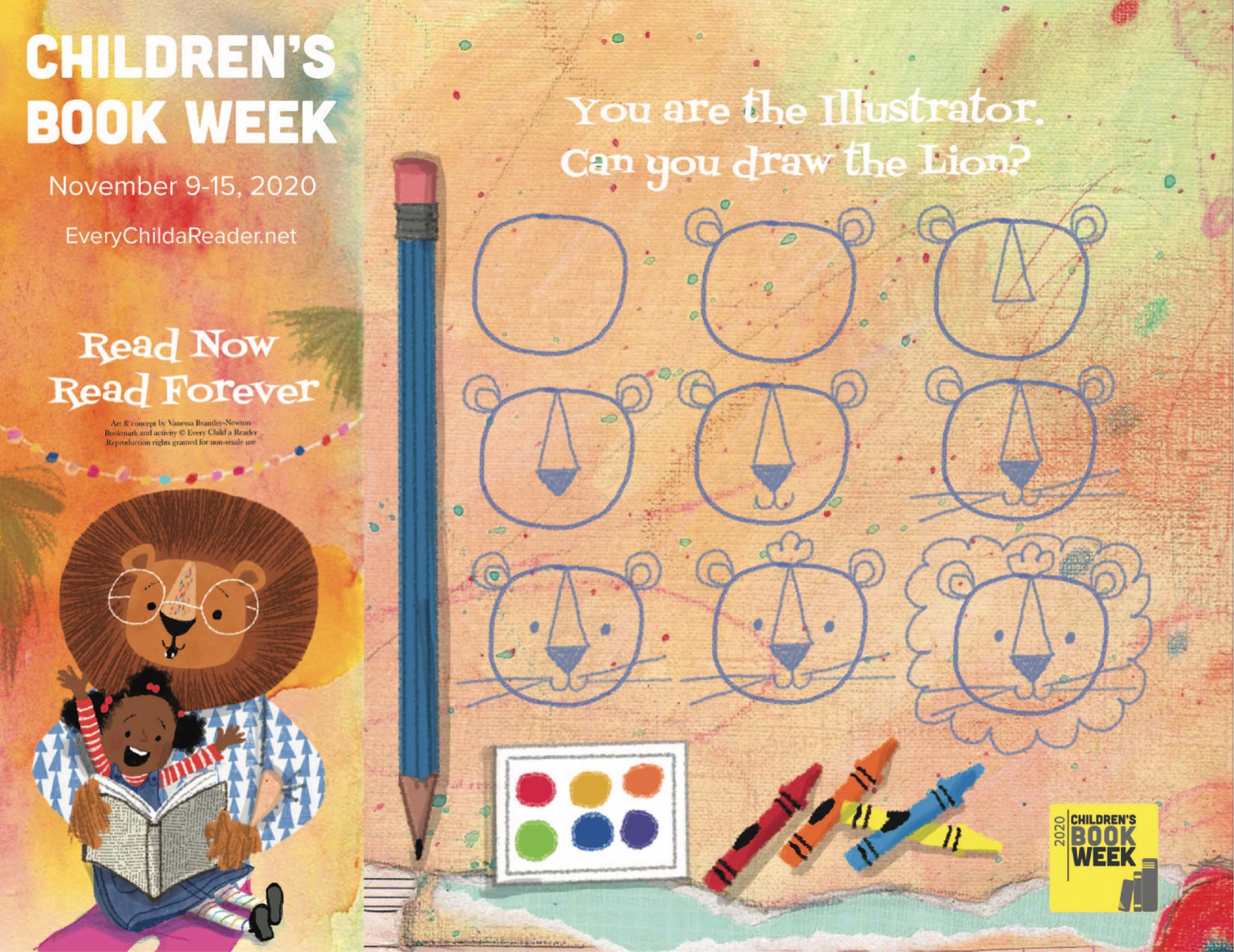 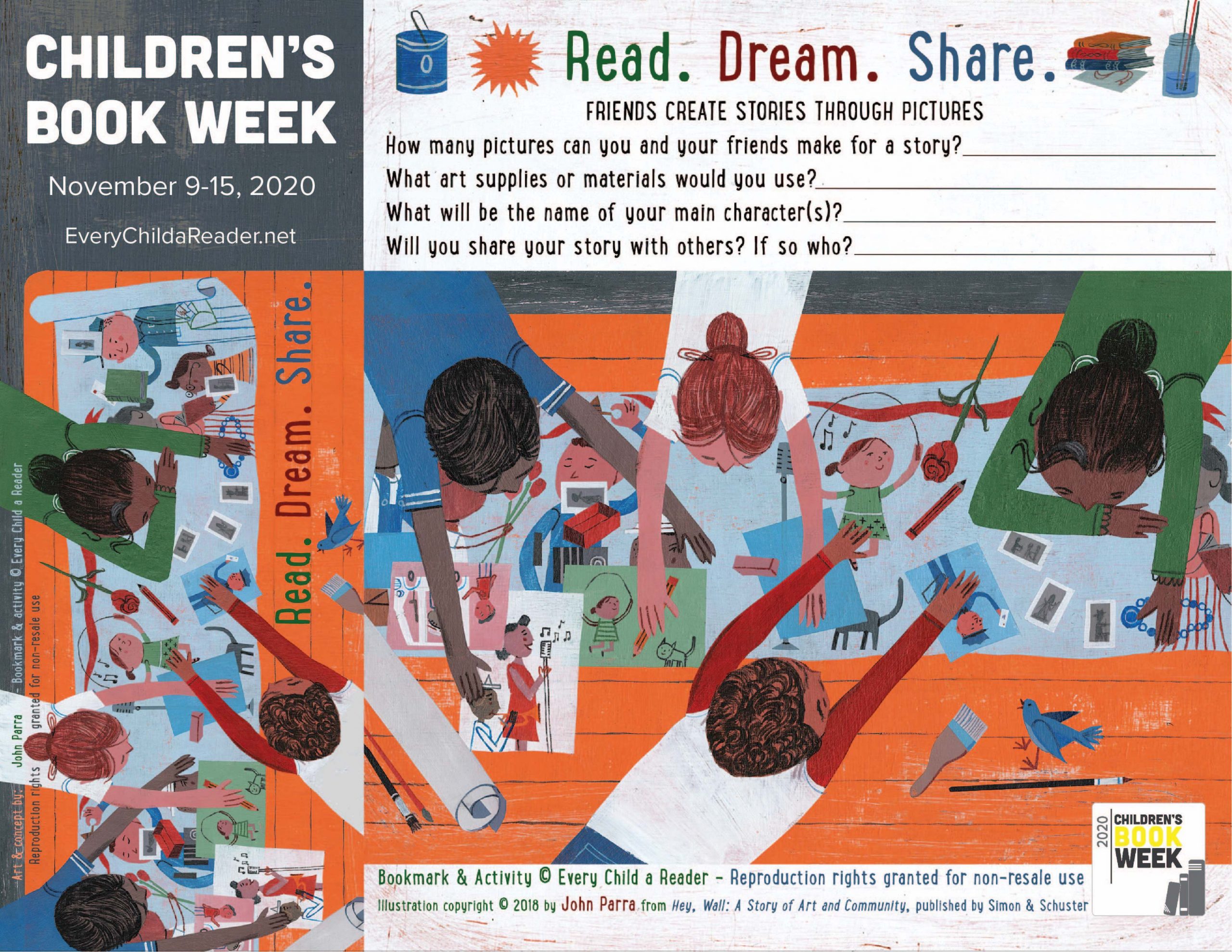 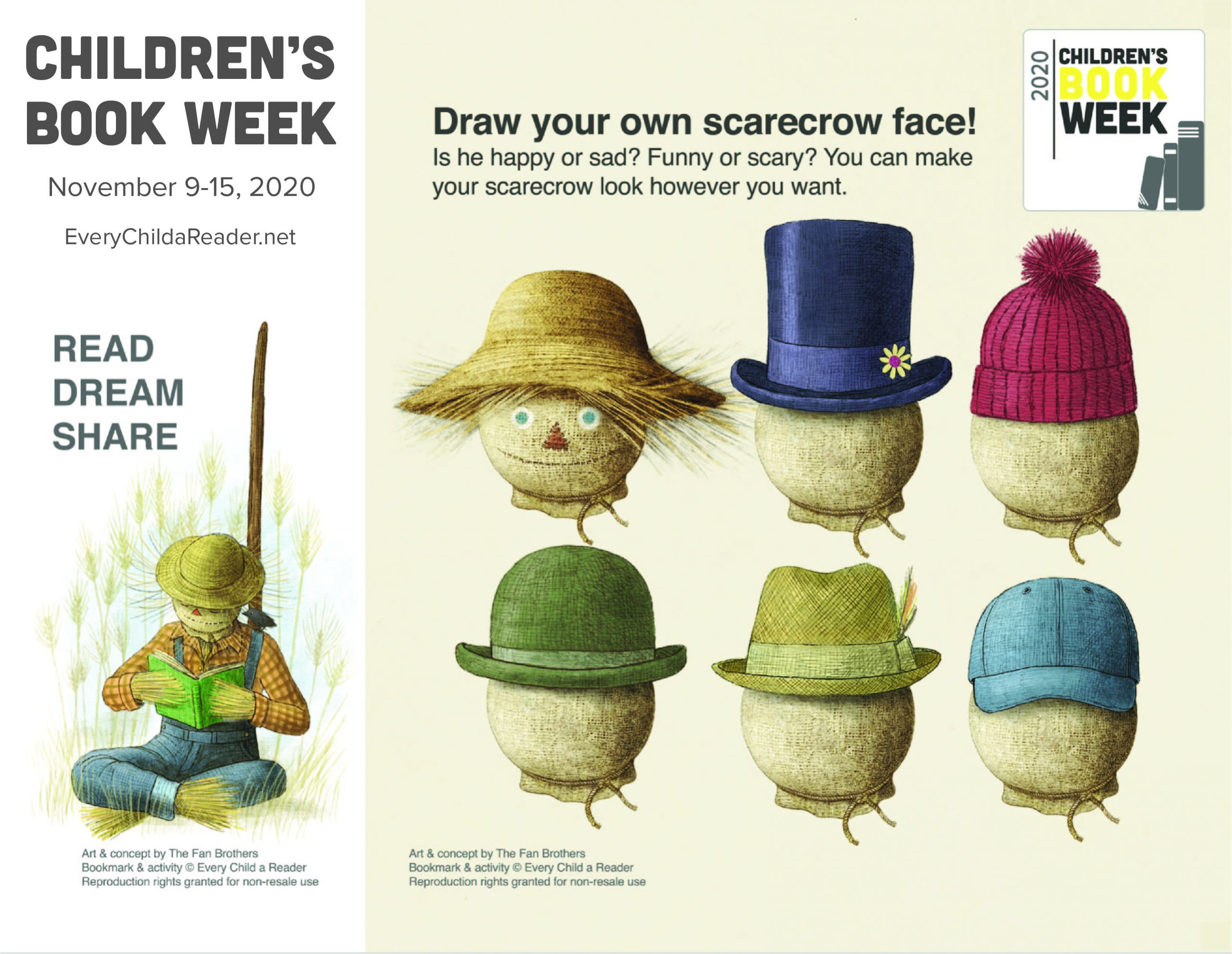 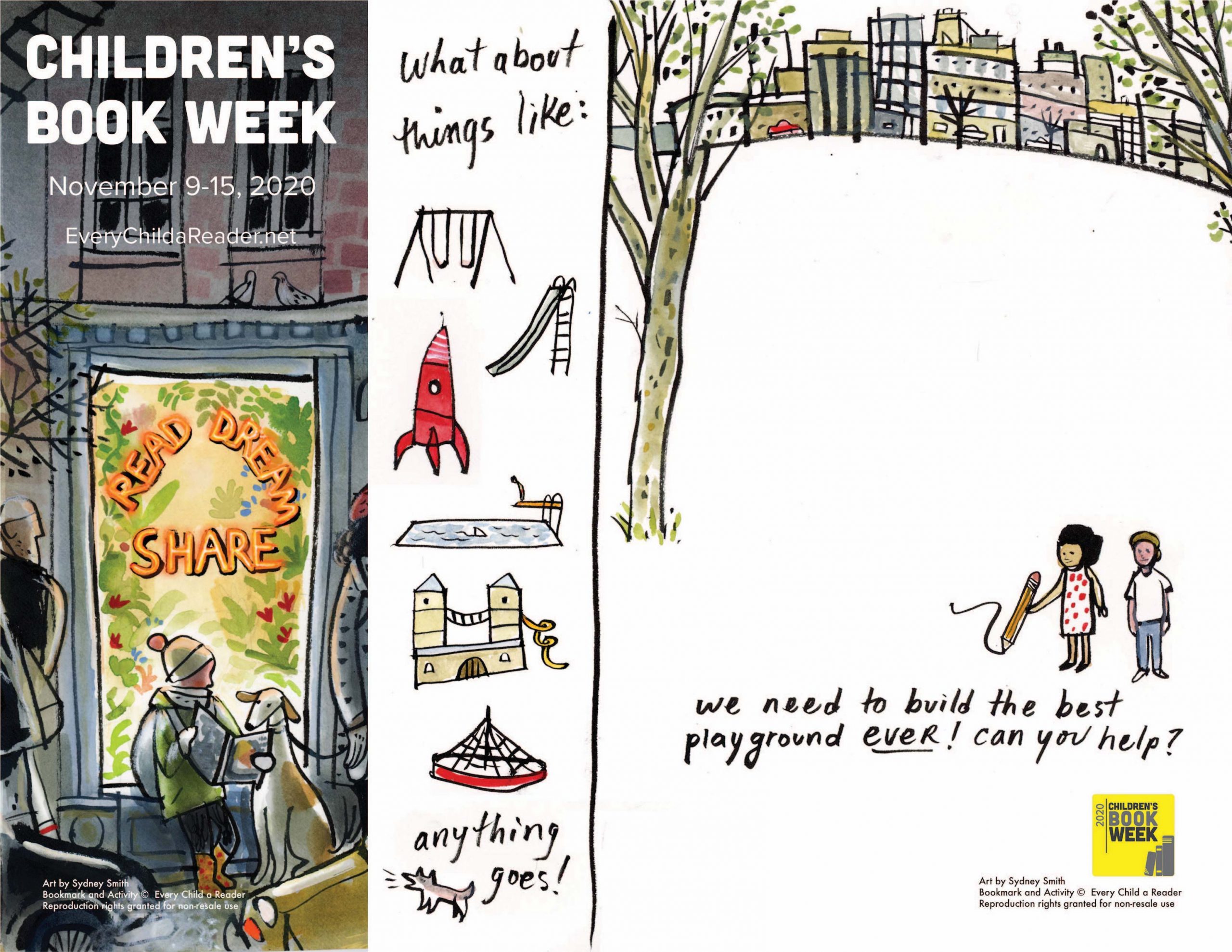 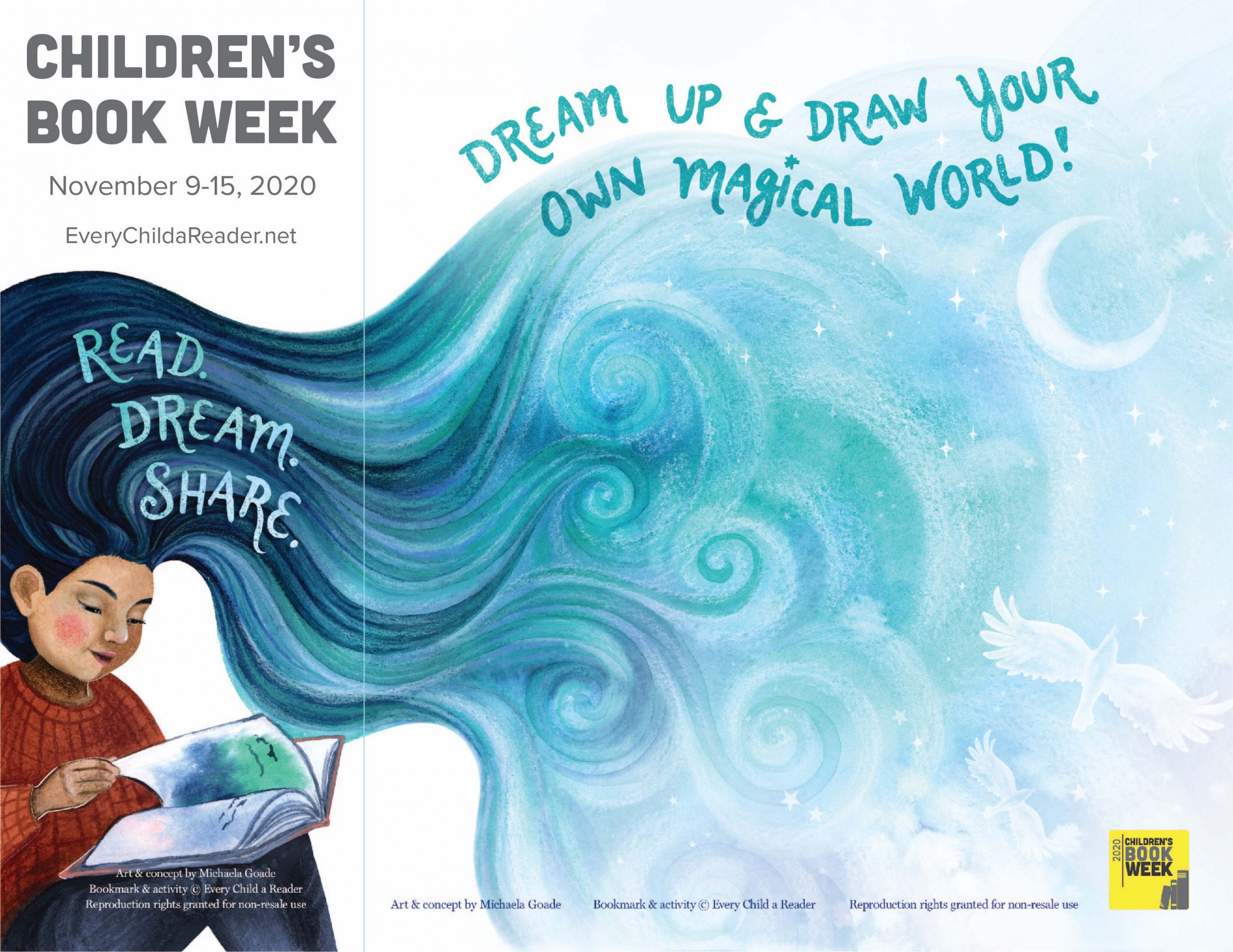 Vanessa Brantley-Newton (Random House Children’s Books)
Vanessa Brantley-Newton is a self-taught illustrator, doll maker, and crafter who studied fashion illustration at FIT and children’s book illustration at the School of Visual Arts in New York. She is the author and illustrator of Grandma’s Purse and has illustrated numerous children’s books, including Sewing Stories by Barbara Herkert. Vanessa currently makes her nest in Charlotte, North Carolina, with her husband, daughter, and a very rambunctious cat named Stripes. Learn more about Vanessa and her artwork at VanessaBrantleyNewton.com. | Facebook. Instagram.

Fan Brothers (HarperCollins Children’s Books)
Terry Fan and Eric Fan are brothers who made their picture book debut with the acclaimed book The Night Gardener, which they wrote and illustrated together. As children they spent one lazy summer on a farm, stargazing at night, chasing fireflies, loading hay bales, and watching the season slowly give way to the brilliant colors of fall. They now reside in Toronto, where they still gaze at the night sky and look for those rare falling stars to wish upon. Visit them online at thefanbrothers.com. | Terry’s Facebook. Terry’s Instagram. | Eric’s Facebook. Eric’s Instagram. Eric’s Twitter.

Michaela Goade (Macmillan Children’s Publishing Group)
Michaela Goade is an artist and graphic designer living and working in Juneau, Alaska, where she was also raised. Forever inspired by the coastal wilds of Southeast Alaska, she works to capture its magic and honor its vibrant cultures. Michaela is from the Raven moiety and Kiks.ádi Clan from Sitka, Alaska. She has illustrated We Are Water Protectors (Carole Lindstrom), Encounter (Brittany Luby), and Raven and the Tide Lady. | Facebook. Instagram. Twitter.

John Parra (Simon & Schuster Children’s Publishing)
John Parra’s illustrations for Frida Kahlo and Her Animalitos, written by Monica Brown, earned the book a New York Times Best Illustrated Book designation. He also illustrated Green Is a Chile Pepper: A Book of Colors by Roseanne Thong, which received a Pura Belpré Honor and the Américas Book Award: Commended; Marvelous Cornelius: Hurricane Katrina and the Spirit of New Orleans by Phil Bildner, which won the Golden Kite Award for Picture Book Illustration and was a Bank Street Best Book of the year; and Hey, Wall, by Susan Verde, which School Library Journal called “a must-purchase” in a starred review. Learn more at JohnParraArt.com. | Facebook. Instagram. Twitter.

Sydney Smith (Holiday House)
Sydney Smith is an illustrator of picture books whose work includes The White Cat and the Monk by Jo Ellen Bogart; Smoot, A Rebellious Shadow by Michelle Cuevas; Sidewalk Flowers by JonArno Lawson; and Town Is By the Sea by Joanne Schwartz, which was awarded the 2018 Kate Greenaway Medal. His accolades include two Governor General’s Literary Awards for Illustrated Children’s Books and four New York Times Best Illustrated Children’s Book of the Year citations. | Instagram. Twitter.

Duncan Tonatiuh (Abrams Books for Young Readers)
Duncan Tonatiuh was born in Mexico City and grew up in San Miguel de Allende. His books have received many awards over the years. He currently lives in San Miguel with his wife and children but travels to the US often. | Facebook. Twitter.