As an annual tradition of Children’s Book Week, esteemed children’s book illustrators are chosen to create bookmarks which celebrate children’s books and reading. This year, in keeping with the theme of Read Now ● Read Forever, seven artists have contributed their beautiful and inspiring artwork. These bookmarks are available to print and distribute to children, teens, and book lovers everywhere! 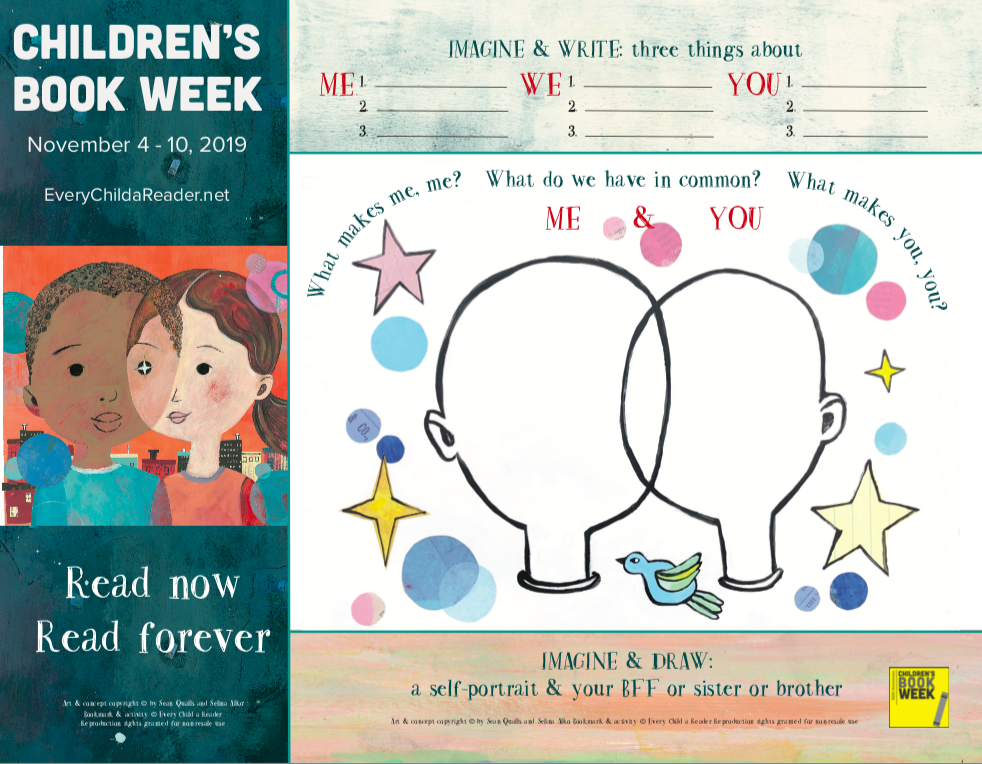 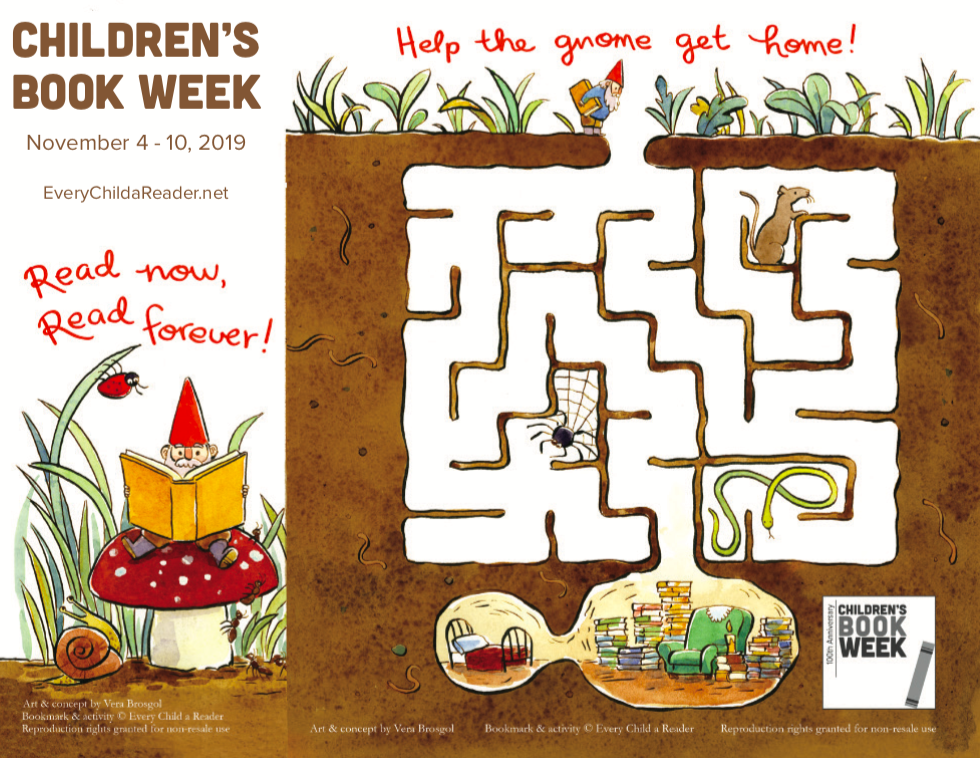 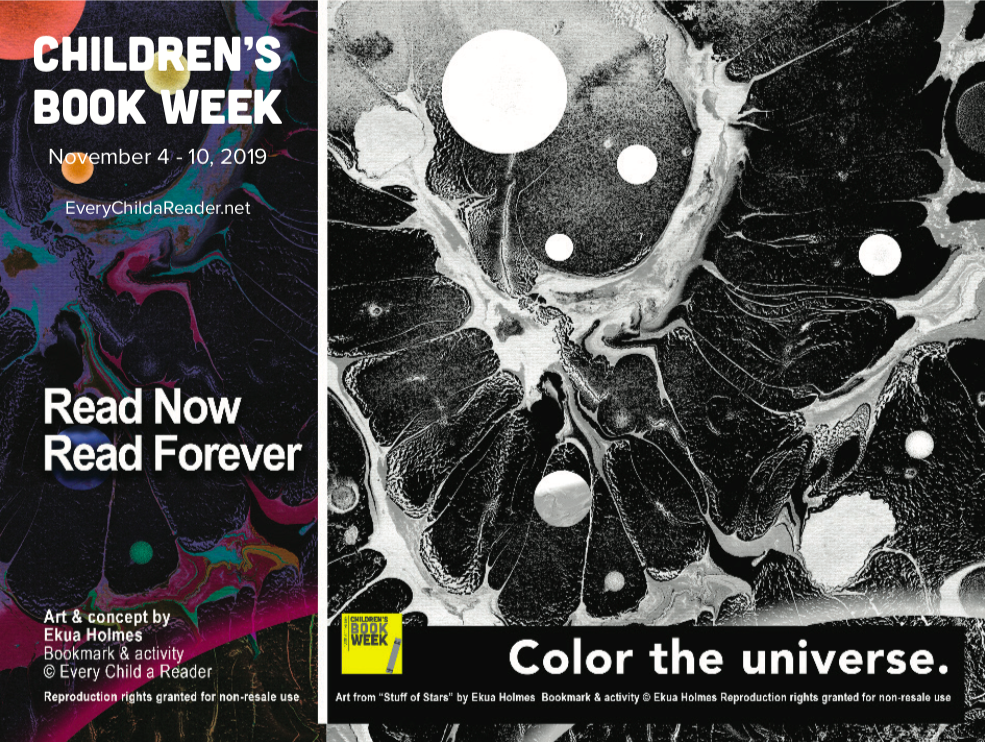 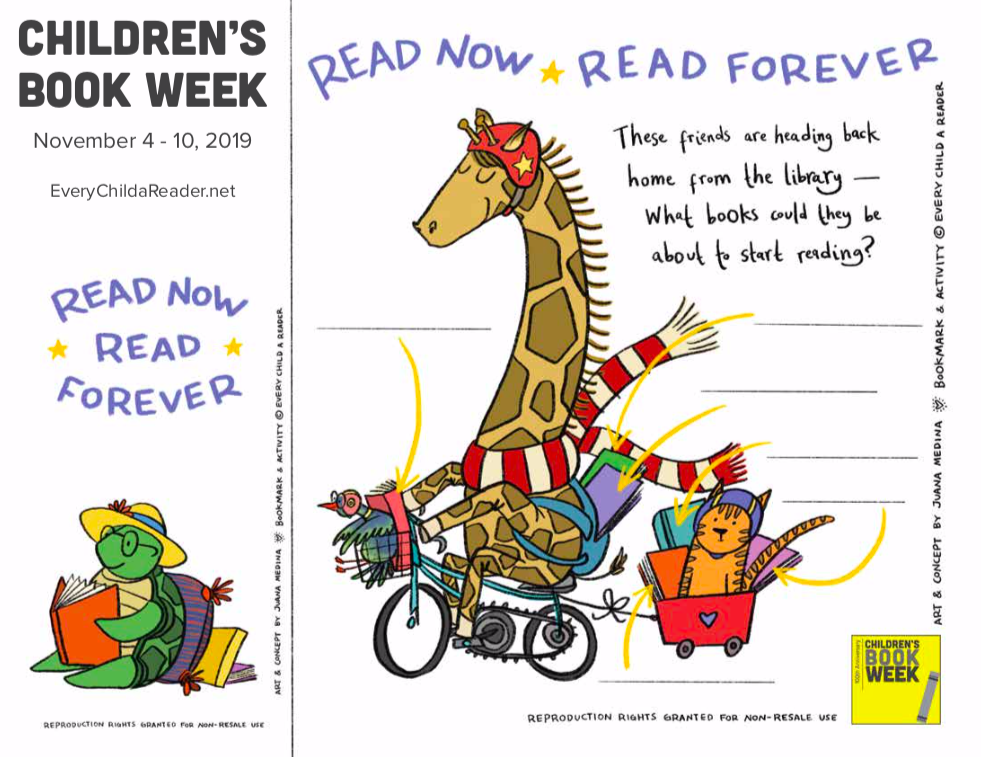 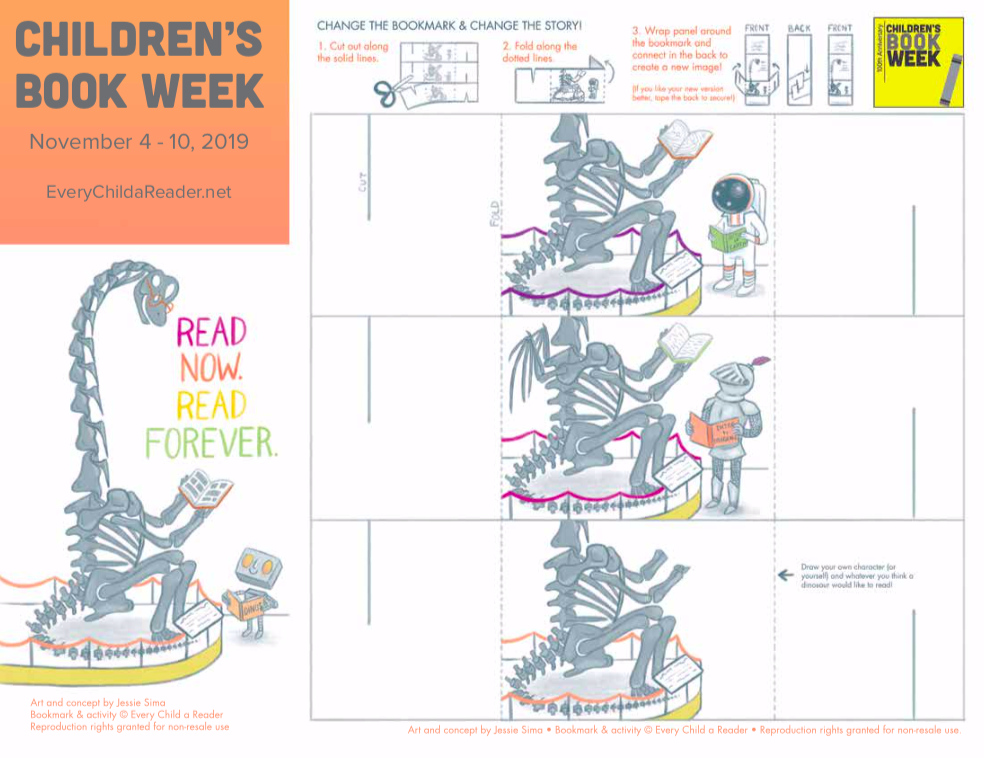 Selina Alko & Sean Qualls (Scholastic)
Selina Alko is the author and illustrator of several acclaimed books for children, including Daddy Christmas & Hanukka Mama and B is for Brooklyn. Sean Qualls has illustrated many celebrated books for children, including Giant Steps to Change the World by Spike Lee and Tonya Lewis Lee, Little Cloud and Lady Wind by Toni Morrison and her son Slade, Dizzy by Jonah Winter, and Before John was a Jazz Giant by Carole Boston Weatherford, for which Sean received a Coretta Scott King Illustrator Honor. Together they have created The Case for Loving and Why Am I Me? The couple lives in Brooklyn, New York, with their two children.

Vera Brosgol (Macmillan Children’s Publishing Group)
Vera Brosgol was born in Moscow, Russia, in 1984 and moved to the United States when she was five. Her two graphic novels, Anya’s Ghost and Be Prepared, were published by First Second, and her debut picture book Leave Me Alone! was a 2017 Caldecott Honor book. She drew storyboards for the animated films Coraline, ParaNorman, and The Boxtrolls. Her newest picture book is called The Little Guys, and it’s an adorable cautionary tale. She lives in Portland, Oregon with her dog Omar, who could probably take on the Little Guys, no sweat.

Jason Chin (Holiday House)
Jason Chin is a celebrated author and illustrator of children’s books. His book Grand Canyon was awarded a Caldecott Honor, a Sibert Honor, and the NCTE Orbis Pictus Award. His other acclaimed nonfiction titles—Coral Reefs, Redwoods, Gravity, and Island: A Story of the Galapagos—have received numerous starred reviews and other accolades. He is also the illustrator of Stephanie Parsley Ledyard’s debut title Pie Is for Sharing, which has received four starred reviews, as well as the upcoming Nine Months, written by Miranda Paul. He lives in Vermont.

Ekua Holmes (Penny Candy Books)
Ekua Holmes’s work is a collage based and her subjects, made from cut and torn papers, investigate family histories, relationship dynamics, childhood impressions, the power of hope, faith and self-determination.
For her work in illustrating children’s literature, Holmes is the recipient of a Caldecott Honor, Coretta Scott King’s John Steptoe New Talent Illustrator award, Robert Siebert and Horn Book awards for her illustrations in Voice of Freedom: Fannie Lou Hamer, Spirit of the Civil Rights Movement, her first illustration project. In 2018, she won the coveted Coretta Scott King Award for Illustration for the book, Out of Wonder: Poems Celebrating Poets.  This year she won the 2019 Coretta Scott King Award again for her illustrations in Stuff of Stars written  by Marion Dane Bauer.
Ms. Holmes currently serves as Commissioner and Vice Chair of the Boston Art Commission. She is also Associate Director at the Center for Art and Community Partnerships at MassArt where she manages and coordinates sparc! the ArtMobile. Ekua Holmes received her BFA in Photography from MassArt in 1977.

Juana Medina (Candlewick Press)
Juana Medina was born and raised in Bogotá, Colombia. She is the illustrator of Smick! by Doreen Cronin and Lena’s Shoes Are Nervous: A First-Day-of-School Dilemma by Keith Calabrese. Juana Medina is also the author-illustrator of 1 Big Salad, ABC Pasta, Sweet Shapes, and Juana & Lucas, which won the 2017 Pura Belpré Author Award. She lives with her wife, twin sons, and their dear dog, Rosie.

Jessie Sima (Simon & Schuster Children’s Publishing)
Jessie Sima is an author/illustrator living and working in New York City. She grew up in a small town in Southern New Jersey, unaware that she was a storyteller. Once she figured it out, she told her family and friends. They took it quite well. She is the author of Not Quite Narwhal; Harriet Gets Carried Away; Love, Z; and upcoming Spencer’s New Pet. You can visit her at JessieSima.com.