Jason Reynolds continues his work to empower students in rural and underserved communities in 2022 — his third year as National Ambassador for Young People’s Literature. In May, Reynolds will kick off the first in-person leg of his “GRAB THE MIC: Tell Your Story” tour in Montana. Participating schools have never hosted an author visit and were selected from more than 200 proposals.

As National Ambassador for Young People’s Literature, Reynolds has connected virtually with thousands of students across the country during the pandemic, inviting young people to share and celebrate their own personal stories. Now in the third year of his ambassadorship, Reynolds looks forward to meeting with students in person.

“I can’t wait for Montana — to finally look into the faces of some of the young people I’ve been serving, to exchange stories and build connection,” Reynolds said. “Like I said at the start of my term, this appointment is not an obligation, but an opportunity to put a spotlight on the collective stories of young America, all while encouraging them to hold those stories and mold them into whatever they want them to be.”

This year, Reynolds will also partner with the digital publisher and education platform Short Edition to bring their innovative short story devices to participating schools.

“Along with the excitement around face-to-face interaction, I also can’t wait to see how these incredible communities engage with the Short Edition Cubes,” he said. “What gems could those cubes contain? What voices might they produce?”

Schools on the spring tour will receive a Short Story Cube, a stand-alone device that allows students to create, edit and print stories of their own making. Short Story Cubes are specifically designed for classroom use and offer educators a fun, immersive way to inspire creative thinking and analysis. The Cubes will allow students to share their stories with select peers participating in the program nationwide.

The three communities Reynolds will visit during his spring tour include:

In support of the spring tour, Simon & Schuster Children’s Publishing will donate paperback copies of Reynolds’ “Look Both Ways: A Tale Told in Ten Blocks,” with  additional support from Dollar General Literacy Foundation. Every Child a Reader, the Library’s National Ambassador program partner, will continue its integral support of Reynolds’ tour and tenure.

For schools that wish to be considered for Reynolds’ Fall 2022 “GRAB THE MIC: Tell Your Story” tour, proposals will be accepted through May 20. All proposals that were submitted for the Spring 2022 tour will also be considered for fall events. For more information please visit everychildareader.net/ambassador/.

Over the course of Reynolds’ ambassadorship, he has served as a key innovator and champion of young people. Acting quickly during the pandemic, Reynolds pivoted, putting his signature platform “GRAB THE MIC: Tell Your Story” online. He debuted a digital tour connecting him with thousands of students across 23 states; a 30-part video series, “Write. Right. Rite,” which offers fun and engaging prompts to express and build creativity; and a newsletter. In September 2021, Reynolds was appointedto a historic third year as the National Ambassador for Young People’s Literature.

Educators are invited to download Reynolds’ “GRAB THE MIC: Tell Your Story” educator guides. The guides include activities for educators to implement in their classrooms to encourage students to celebrate their personal stories.

Jason Reynolds is a No. 1 New York Times bestselling author, a Newbery Award Honoree, a Printz Award honoree, a two-time National Book Award finalist, a Kirkus Award winner, a Carnegie Medal winner, a two-time Walter Dean Myers Award winner, an NAACP Image Award winner and the recipient of multiple Coretta Scott King Award honors. He’s also the 2020–2022 National Ambassador for Young People’s Literature. His many books include “All American Boys” (co-written with Brendan Kiely), “When I Was the Greatest,” “The Boy in the Black Suit,” “Stamped,” “As Brave as You,” “For Every One,” the Track series (“Ghost,” “Patina,” “Sunny,” and “Lu”), “Look Both Ways,” “Stuntboy, in the Meantime” and “Long Way Down,” which received a Newbery Honor, a Printz Honor and a Coretta Scott King Award Honor. He lives in Washington, D.C. You can find more about Jason and his writing at JasonWritesBooks.com.

Every Child a Reader is a 501(c)(3) literacy charity whose popular national programs include Children’s Book Week, the longest-running literacy initiative in the country, celebrating 103 years in 2022; the Kids’ Book Choice Awards, the only national book awards chosen solely by children and teens; Get Caught Reading, a classroom poster project; and the National Ambassador for Young People’s Literature program, in partnership with the Library of Congress.

About the Library of Congress

The Library of Congress is the world’s largest library, offering access to the creative record of the United States — and extensive materials from around the world — both on-site and online. It is the main research arm of the U.S. Congress and the home of the U.S. Copyright Office. Explore collections, reference services and other programs and plan a visit at loc.gov; access the official site for U.S. federal legislative information at congress.gov; and register creative works of authorship at copyright.gov. 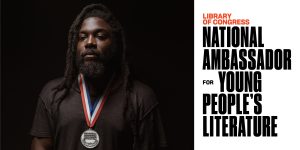