Each Wins 28 Award Finalists to Donate to Local Charity

Every Child a Reader is proud to announce the 15 winners of the 2017 Children’s Book Week Contest. In celebration of the 98th anniversary of Children’s Book Week, 705 libraries, schools, and bookstores were invited in May of this year to enter a national display contest around the theme of “One World, Many Stories.” In recognition of this award, the following 15 libraries, schools and indie bookstores will be giving 28 children’s books – one each of the 28 Children’s and Teen Choice Book Awards  – to donate to a local charity of their choice.

The winning locations and their local charities:

Every Child a Reader is a 501(c)(3) literacy charity whose popular national programs include Children’s Book Week, the longest-running literacy initiative in the country; the Children’s & Teen Choice Book Awards, the only book awards chosen by children and teens; and the National Ambassador for Young People’s Literature program, in partnership with the Library of Congress. Launched in 1919, Children’s Book Week will celebrate its 100th anniversary in May 2019. Launched in 2008, the Children’s and Teen Choice Book Awards are the only national book awards voted on only by kids and teens. 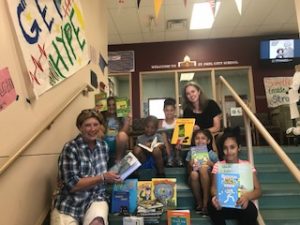