Vroman’s Bookstore to Host Reading and Award Event May 5

New York, NY – May 2, 2018 – Penguin Young Readers, the Children’s Book Council, and Every Child a Reader are proud to announce that After the Fall (How Humpty Dumpty Got Back Up Again), by Dan Santat (Macmillan Children’s Publishing Group/Roaring Brook Press) is the winner of the Second Annual Anna Dewdney Read Together Award.

A book launch and award event for Dan Santat at Vroman’s Bookstore in Pasadena, California at 10 AM on Saturday, May 5 is a cornerstone of events taking place across the U.S. from April 30 to May 6 at 800 schools, libraries and bookstores as part of the 99th annual Children’s Book Week.

Dan Santat is the Caldecott Medal–winning and New York Times–bestselling author and illustrator of The Adventures of Beekle: The Unimaginary Friend and the road trip/time travel adventure Are We There Yet? His artwork is also featured in numerous picture books, chapter books, and middle-grade novels, including Dav Pilkey’s Ricky Ricotta series. Dan lives in Southern California with his wife, two kids, and many, many pets. His newest picture book is Dude! by Aaron Reynolds.

Santat will be awarded a prize of $1,000 from the Children’s Book Council, and Penguin will purchase and donate 250 copies of After the Fall to a school, library, or literacy organization of his choice.

About Anna Dewdney
Anna Dewdney was the New York Times bestselling author and illustrator of Llama Llama Red Pajama. Other award-winning books in the Llama Llama series include Llama Lama and the Bully Goat, Llama Lama Time to Share, Llama Llama Misses Mama, Llama Llama Holiday Drama, and Llama Llama Mad at Mama. Llama Llama Loves to Read will release in May 2018. She was also the author/illustrator of Little Excavator, Nobunny’s Perfect, Roly Poly Pangolin, and Grumpy Gloria. Anna worked as a rural mail carrier and taught at a boys’ boarding school for many years before becoming a full-time author and illustrator. Anna was a committed advocate of literacy, speaking regularly on this topic and publishing articles in the Wall Street Journal and other national outlets. 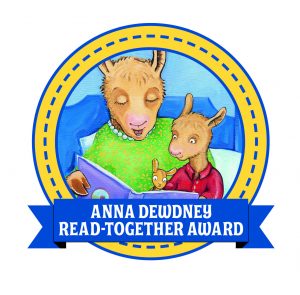