In the brand new book, 100 Years of Children’s Book Week Posters (Alfred A. Knopf Books for Young Readers, on sale now), renowned historian Leonard S. Marcus offers a visual history tour of a century of beloved illustrators and the stunning posters they created for the annual celebration of Children’s Book Week.

In honor of the books release, Leonard S. Marcus gives you the inside scoop on his favorite posters, exciting details he was able to add to this new edition, and more!

How did you get involved with creating the original book, 75 Years of Children’s Book Week Posters?

By 1994, I had written quite a lot about the history of American children’s books. My biography of Margaret Wise Brown had been published two years earlier, I had done several articles for PW and the Horn Book and was deep into Ursula Nordstrom’s 100,000-letter editorial archive in search of the representative cross-selection of letters that became Dear Genius. Along the way, I interviewed many of the great artists and writers in the field, including Garth Williams, Leonard Weisgard, Maurice Sendak, William Steig, and James Marshall, all of whom had designed Book Week posters. So, knowing my background, Paula Quint, who was then the CBC’s executive director, called me one day and asked if I would like to write a book about the posters. It sounded like a good project, and it was, though it took much longer than I expected.

One reason it took so long is that in Book Week’s early years, the posters were not always designed by book illustrators, whose careers tend to be well documented. Several were done by advertising artists, who were more apt to see themselves as hired guns and were typically far less concerned about leaving a paper trail. I soon realized that I was in for some real detective work. When I could find nothing at the library about Jay Maurice Reibel (1936), for instance, I followed a hunch and looked for his name in the Manhattan White Pages. I thought it unlikely that he was still alive, but doing this gave me the phone number of a young man who turned out to be Reibel’s nephew. Thanks to him, I then made contact with the late artist’s brother, with whom I spent an afternoon at a New Jersey retirement home gathering the information I needed.

In updating the book for the 100th anniversary, what are some interesting new facts that you discovered/decided to share?

The World Wide Web barely existed in 1994, and I was still doing all my research the old-fashioned way. The extraordinary resources now available online for genealogical research and biographical work generally made it possible this time round to fill in nearly every missing birth and death year and to bring to light some fascinating information about some artists’ lives. Jon O. Brubaker (1925, 1926) created one of the most graphically splendid posters in the series–and was also one of the hardest artists to pin down. I had previously discovered that he’d built his reputation as a billboard painter, which must have seemed an exciting new form of mass communication in the days when Americans were first taking to the road in cars. In the new edition I was able to add that Brubaker also had a passion for rail travel that expressed itself in the ads he designed for the New York Central Railroad and for the Lionel Corporation, for generations the makers of the absolutely coolest electric model trains. I still wonder why an artist with a talent as special as Brubaker’s did not have a much bigger, more public career. One newly discovered source hinted at the possibility of his having lost all his money in the 1929 stock market crash. Perhaps there is a sad story there. The vagaries of the freelance life!

In the note about Eric Carle, I added a mention of the museum Carle founded in 2002 in Amherst, MA. This won’t necessarily be news to readers, and it certainly wasn’t news to me considering that I have been an Eric Carle Museum trustee from the very beginning. But it’s worth a call-out here because in 1994, when Book Week turned 75, a full-dress art museum devoted to children’s book illustration would have seemed a wild improbability. The fact that such a museum is now a going concern is as strong an indicator as any of the extent of the children’s-book industry’s coming of age over these past 25 years.

What are some of your favorite Children’s Book Week posters?

The 1925 Brubaker poster I mentioned before is my absolute favorite. I have also always loved William Steig’s (1972), especially his extravagant suggestion that an elephant’s back might be a good place to curl up with a book. Emily Arnold McCully’s “Book Power” poster (1969) sums up a whole era of youth protest and activism while somehow remaining a playful image that has not dated. It’s hard not to crack a smile at the outrageousness of Tomi Ungerer’s two-kids-in-a-catapult poster (1967), which Ungerer re-purposed for Book Week after Pepsi-Cola rejected it for use in its advertising. Of the recent posters, my favorite is Christian Robinson’s (2017), because it says what it set out to say with such clarity and in such a spirit of celebration.

Are there any historical moments that made a big and noticeable impact on the Book Week posters of that time?

Yes, the posters reflect many of the key moments and developments in American history over the last century, just as the children’s books of the same period do. Jessie Willcox Smith’s two inaugural posters (1919-1923 and 1924) herald the rise of an American middle-class that embraced the goal of fostering a love of reading in its children. Ralph Bell Fuller’s (1939) modernist graphic of the earth encircled by a ring of books points to America’s growing awareness of its inescapable role on the world stage. You can sense the hopeful post-war impulse that culminated in the founding of the United Nations in the posters for 1944 and 1945 by Nedda Walker and Gertrude Howe respectively, both of which bear the slogan “United Through Books.” You can witness the arrival on the American scene of the exciting new post-war international graphic design sensibility in the posters of Paul Rand (1958) and Bruno Munari (1964) among others. Created at the height of the civil rights movement, Ezra Jack Keats’s poster (1965) reflects the American book world’s belated recognition of the importance of diversity in children’s books. Recent posters like those by Christian Robinson (2017) and Brian Selznick (2013) show that that truism continues to bear restating.

How would you say that Children’s Book Week has affected children’s publishing?

It has provided a catalyst for book-based community activities on a national scale. The original goal of Book Week was to get parents directly involved by encouraging them to read to their children, set up home libraries so that books would become a natural presence in their children’s lives, and to participate in local grass-roots celebrations of books and reading. Later, the main focus of Book Week shifted to providing teachers, librarians, and booksellers with coordinated opportunities to highlight their love of books within their communities.

For those excited to learn more about the history of Children’s Literature, can you recommend some good books to read?

I would invite readers to visit my website (www.leonardmarcus.com). Of the more than 25 books I have published so far, a good one to start with (besides 100 Years of Children’s Book Week Posters!) might be Dear Genius: The Letters of Ursula Nordstrom, which chronicles Nordstrom’s visionary career as the publisher of Goodnight Moon, Charlotte’s Web, Where the Wild Things Are, and other classics through her correspondence with her authors and artists. Nordstrom was always wise about books and the creative alchemy behind them, and–the daughter of two vaudevillians–she was often hilarious, too.

Of the books about children’s books that have meant the most to me, I would put Barbara Bader’s American Picturebooks from Noah’s Ark to the Beast Within at the top of my list. It’s a history of the art form through the mid-1970s, when this encyclopedic chronicle was published, written with verve and understanding. I also still go back to Selma G. Lanes’ Down the Rabbit Hole, a collection of smart, peppery essays that first appeared in the Washington Post and New York Times. Maurice Sendak’s essays in Caldecott & Company never fail to be revelatory either as writing or commentary. I have also learned a great deal from Vivian G. Paley’s The Girl with the Brown Crayon, a kindergarten teacher’s account of a year spent sharing Leo Lionni’s picture books with her class in all sorts of open-ended and deeply nourishing ways.

What else are you up to?

Several projects have come to fruition, and between February and May I will have had three new books published and two exhibitions on view that I have curated. Besides our Book Week book, I have written the art book and biography, Helen Oxenbury: A Life in Illustration; and the University of Minnesota Press will publish The ABC of It: Why Children’s Books Matter, a fully illustrated catalog based on my exhibition of the same name. Some readers will recall having seen that show at the New York Public Library in 2013-14. I’m thrilled to say that “The ABC of It” has been given a new life at the University of Minnesota’s Andersen Library, and that when its run ends there in May it will go out on an international tour. My second exhibition this spring is at the Eric Carle Museum in Amherst, MA. It is called “OUT OF THE BOX: The Graphic Novel Comes of Age” and is that museum’s first exploration of the world of comics. I have long thought that if I had to choose a personal motto, it would be: “Everything happens at the same time”–and I guess this solar convergence of new work proves the truth of those words. 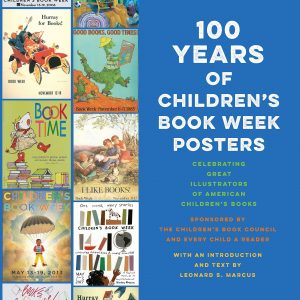