Tune in for a virtual reading of the winning title….

New York, NY – May 1, 2020 – Penguin Young Readers, the Children’s Book Council, and Every Child a Reader are proud to announce that Thank You, Omu!, written and illustrated by Oge Mora (Little, Brown Books for Young Readers), is the winner of the fourth annual Anna Dewdney Read Together Award. 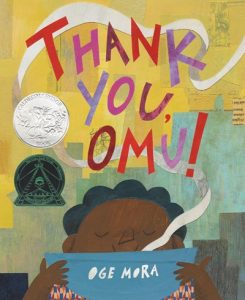 Oge Mora graduated from the Rhode Island School of Design with a BFA in illustration. When not painting in her studio, Oge is in the kitchen cooking her late grandmother’s recipes. Her first picture book, Thank You, Omu!, was a Caldecott Honor, a Coretta Scott King/John Steptoe New Talent illustrator award winner, an Ezra Jack Keats illustrator award winner, a New York Times Notable Book and Editors’ Choice, and a Junior Library Guild selection. Her second picture book, Saturday, received five starred reviews and was on a half-dozen best-of-the-year lists. She has also illustrated The Oldest Student: How Mary Walker Learned to Read by Rita Lorraine Hubbard. Oge lives in Providence, Rhode Island, and she invites you to visit her website at www.ogemora.com.

As we all take recommended measures to keep loved ones safe, Children’s Book Week (May 4-10) will not be able to be celebrated in the traditional sense. We hope you still join us in celebration online, and we encourage participants to share what they’re doing to celebrate books, creators, and readers by tagging their posts with #BookWeek2020AtHome.

Due to this change, we hope you join Oge Mora’s live stream read-aloud event of her winning title, Thank You, Omu! on May 8th at 3:00pm EST on the Every Child a Reader Facebook Page. This will be one of many virtual readings and events taking place during Children’s Book Week (May 4-10). We look forward to celebrating in recognition of Mora receiving the Anna Dewdney Read Together Award across many miles and households.

Mora will be awarded a prize of $1,000 from the Children’s Book Council and Penguin will purchase and donate 250 copies of Thank You, Omu to a school, library, or literacy organization of her choice.

The winner and honor books were chosen by voting over the last two months by librarians, teachers, and booksellers across America.

Anna Dewdney was the New York Times bestselling author and illustrator of Llama Llama Red Pajama. Other award-winning books in the Llama Llama series include Llama Lama and the Bully Goat, Llama Lama Time to Share, Llama Llama Misses Mama, Llama Llama Holiday Drama, and Llama Llama Mad at Mama. Llama Llama Loves to Read was released in May 2018. She was also the author/illustrator of Little Excavator, Nobunny’s Perfect, Roly Poly Pangolin, and Grumpy Gloria. Anna worked as a rural mail carrier and taught at a boys’ boarding school for many years before becoming a full-time author and illustrator. Anna was a committed advocate of literacy, speaking regularly on this topic and publishing articles in the Wall Street Journal and other national outlets.

Every Child a Reader is a 501(c)(3) literacy charity dedicated to inspiring a lifelong love of reading in children and teens across America. Every Child a Reader’s major national programs include: Children’s Book Week, celebrating 100 years this year; the Children’s & Teen Choice Book Awards; Get Caught Reading; and the National Ambassador for Young People’s Literature program, in partnership with the Library of Congress. 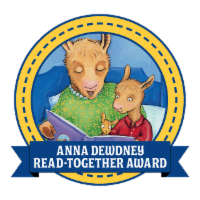