The nation’s largest literacy celebration is about to get bigger. In an effort to attract more educators and boost school participation in Children’s Book Week, the Children’s Book Council and its charitable arm, Every Child a Reader, have developed a brand-new initiative designed to reach teachers, school librarians, and students. From November 4–10, the Fall Children’s Book Week will help extend the centennial anniversary celebration that kicked off this past spring.

“Over the years, I’ve heard from teachers across the country who wanted to participate in Children’s Book Week with their students, but found that late spring was a difficult time to be involved fully, due to end-of-year testing and schedules,” said Shaina Birkhead, associate executive director of the CBC. (CBW had traditionally taken place in the fall before officially moving to spring in 2008.) “We felt that the 100th anniversary was a perfect opportunity to honor the history of the program,” she added, “while also making it possible for schools to embrace the celebration with their students in a way many had not been able to before.” 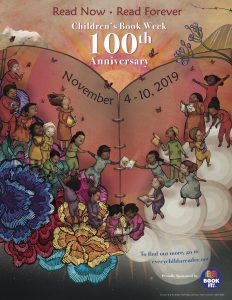