New York, NY – January 20, 2017 – Every Child a Reader has revealed the official Children’s Book Week poster commemorating the 98th annual celebration of books for young people and the joy of reading, to be held May 1-7, 2017. This year’s poster is designed by Christian Robinson, the illustrator of such acclaimed picture books as Gaston by Kelly DiPucchio and Last Stop on Market Street by Matt de la Peña, for which he received a Coretta Scott King Illustrator Honor and a Caldecott Honor.

Robinson joins the ranks of children’s literature icons such as Ezra Jack Keats, Jerry Pinkney, Brian Selznick, Maurice Sendak, Rosemary Wells, and Garth Williams as the designer of the Children’s Book Week poster — a tradition dating back to the program’s creation in 1919. The 2017 poster features this year’s Children’s Book Week slogan, “One World, Many Stories,” highlighting the power of books to unite readers of all backgrounds. The poster was revealed by USA Today for the fifth consecutive year and will be distributed nationwide to attendees at official Book Week events in May.

Judith Haut, Senior Vice President, Associate Publisher of Random House Children’s Books and Chair of the Every Child a Reader Board, says of the poster, “We’re honored to feature Christian Robinson’s vibrant artwork among these historic tributes to the longest-running national literacy initiative in the country.”

Registration to be an official event location for Children’s Book Week is now open online, as Every Child a Reader seeks 500 schools, libraries, and bookstores across all 50 states to host dedicated story times, activity hours, book award voting time, or author/illustrator events. In addition to receiving the Children’s Book Week poster and access to downloadable materials, which range from bookmarks with art by four prominent illustrators to an original Every Child a Reader graphic novel, all participants will be included in a national publicity campaign and book donation. The deadline for event sign-up is March 1, 2017.

Christian Robinson is “one of the most exciting children’s book artists working today,” according to the New York Times. He received a Caldecott Honor for Last Stop on Market Street by Matt de la Peña, which was also a Newbery Medal winner and a New York Times Bestseller. He also illustrated Rain! by Linda Ashman, winner of the Ezra Jack Keats New Illustrator Award, and Josephine by Patricia Hruby Powell, recipient of a Boston Globe–Horn Book Honor and a Coretta Scott King Illustrator Honor. He lives in San Francisco. Learn more at TheArtOfFun.com.

Launched in 1919, Children’s Book Week will commemorate its 98th anniversary May 1-7, 2017. It is the longest-running national literacy initiative in the country.

The Children’s Book Council is the nonprofit trade association for children’s book publishers in North America. The CBC offers children’s publishers the opportunity to work together on issues of importance to the industry at large, including educational programming, literacy advocacy, and partnerships with other national organizations. Our members span the spectrum from large international houses to smaller independent presses. 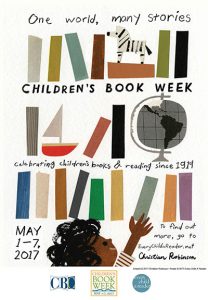