As a celebration of the 2020 Children’s Book Week we’re presenting the art of 23 illustrators! These beloved children’s book artists have contributed their beautiful and inspiring artwork to help us celebrate our 2020 theme, Read. Dream. Share.

Each individual illustration is available to print and distribute to children, teens, and book lovers everywhere. Or download the full Coloring Book. 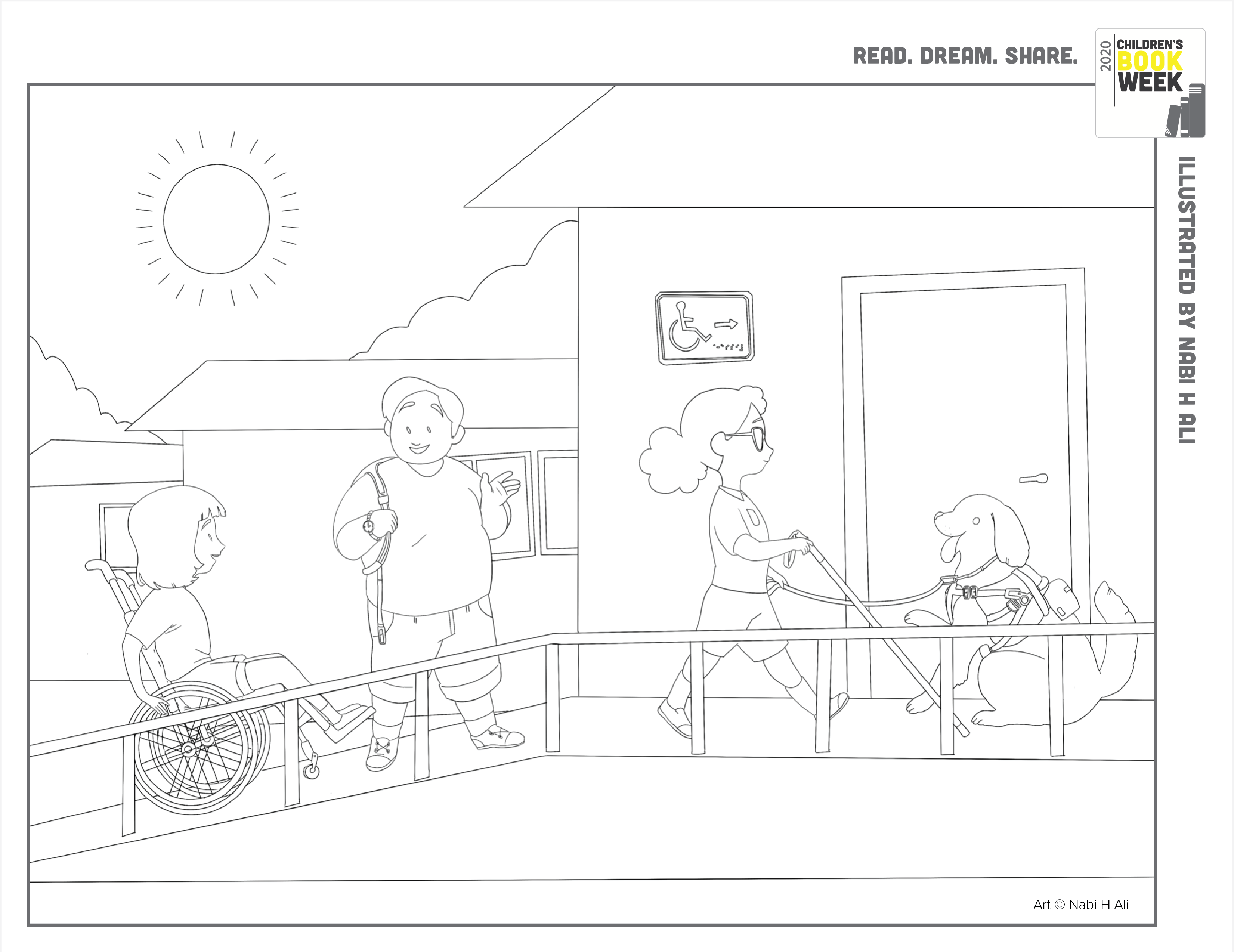 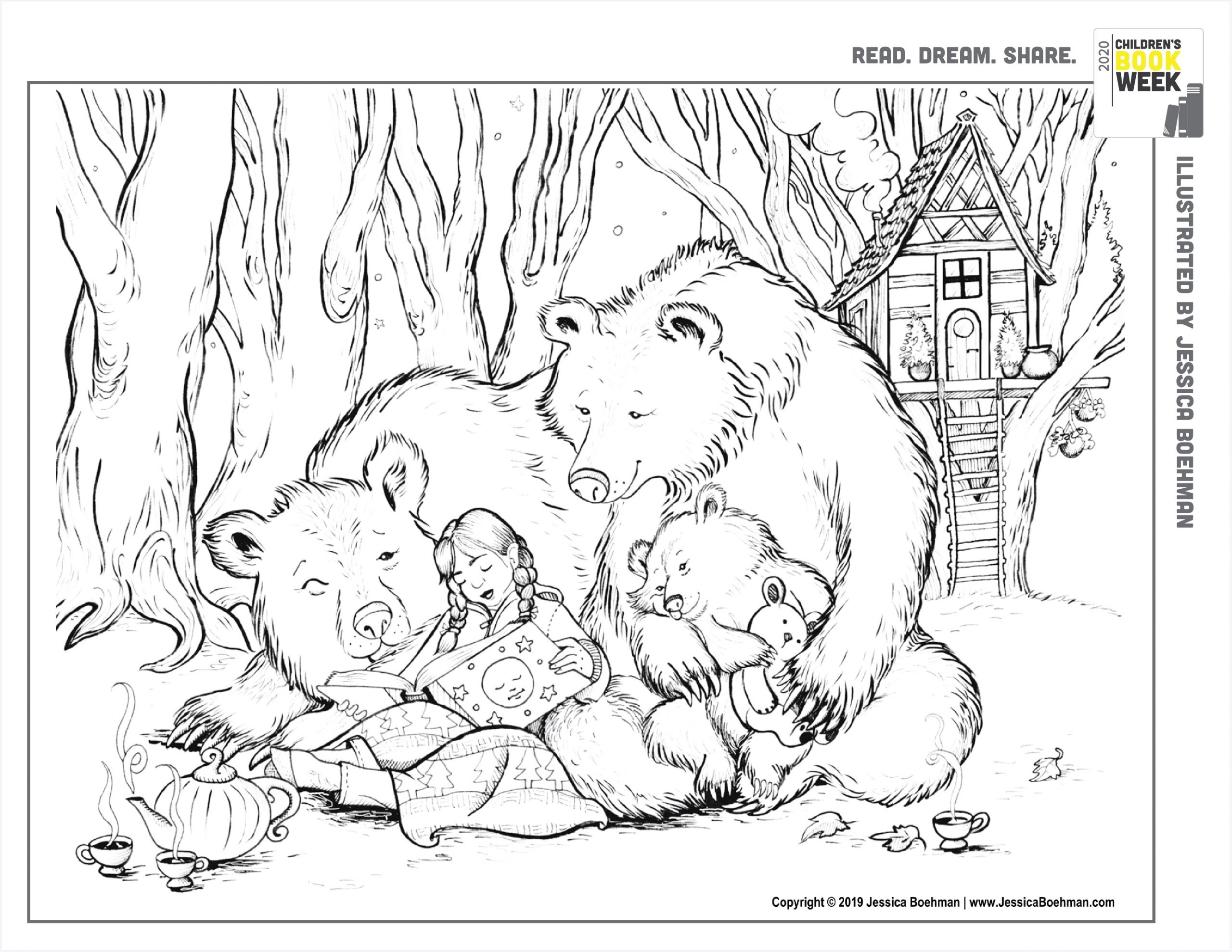 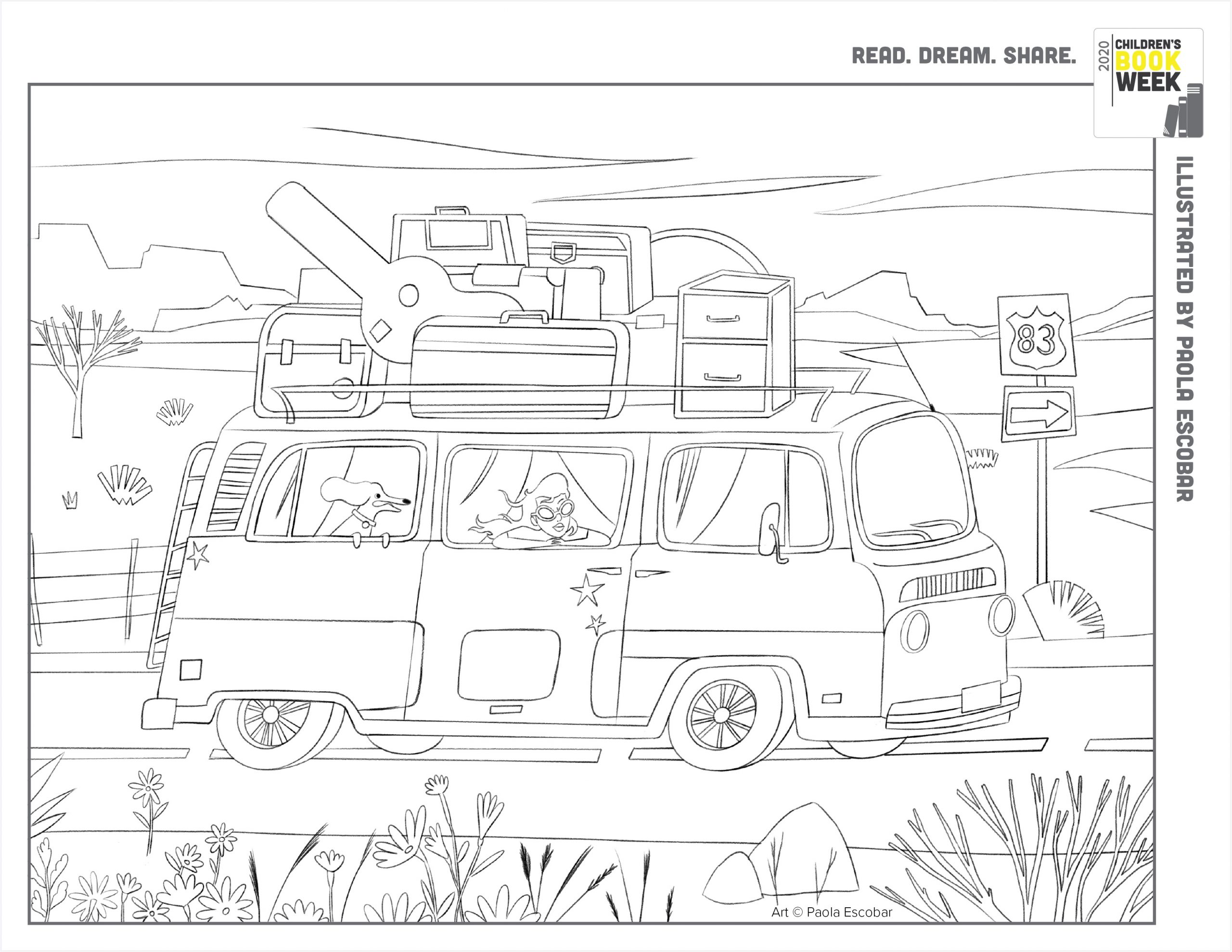 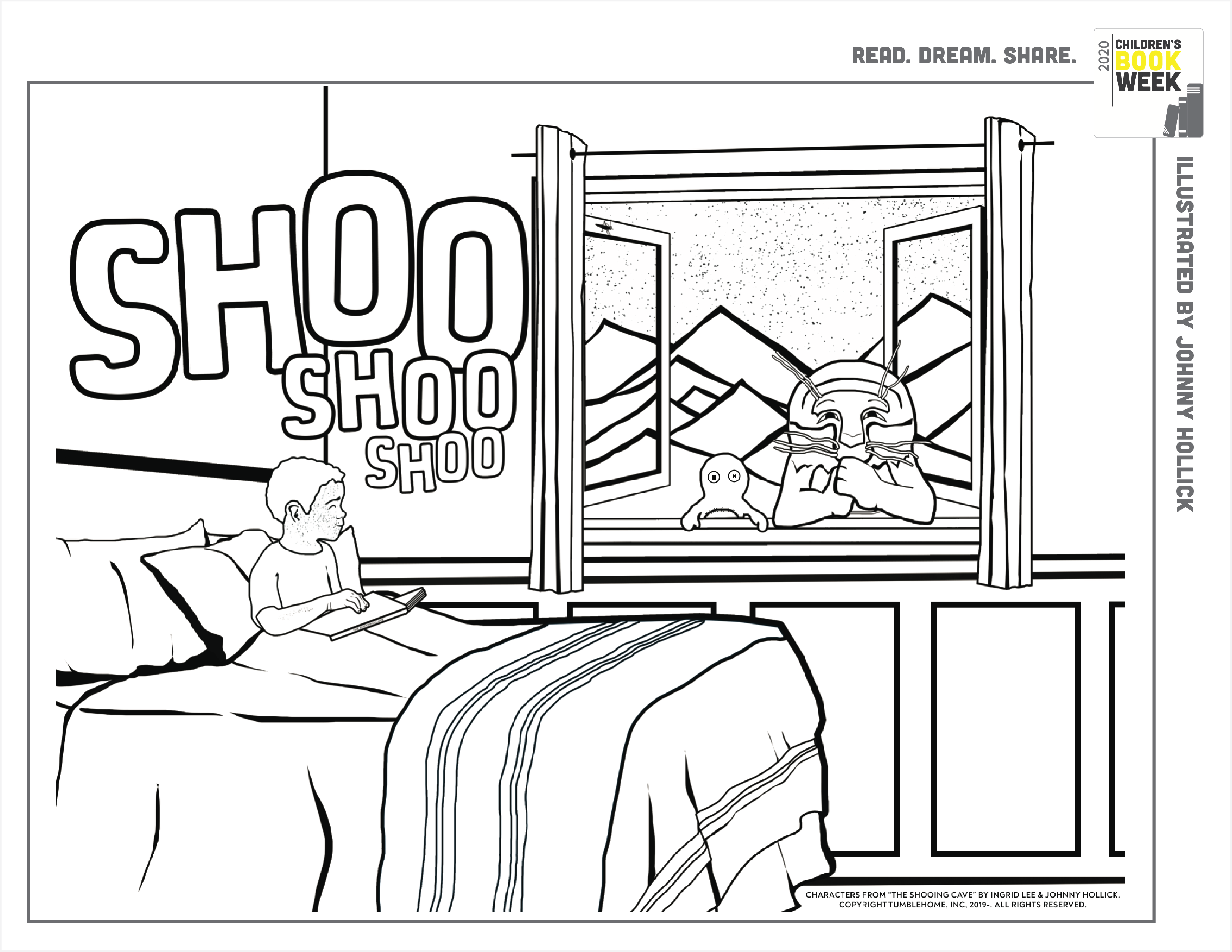 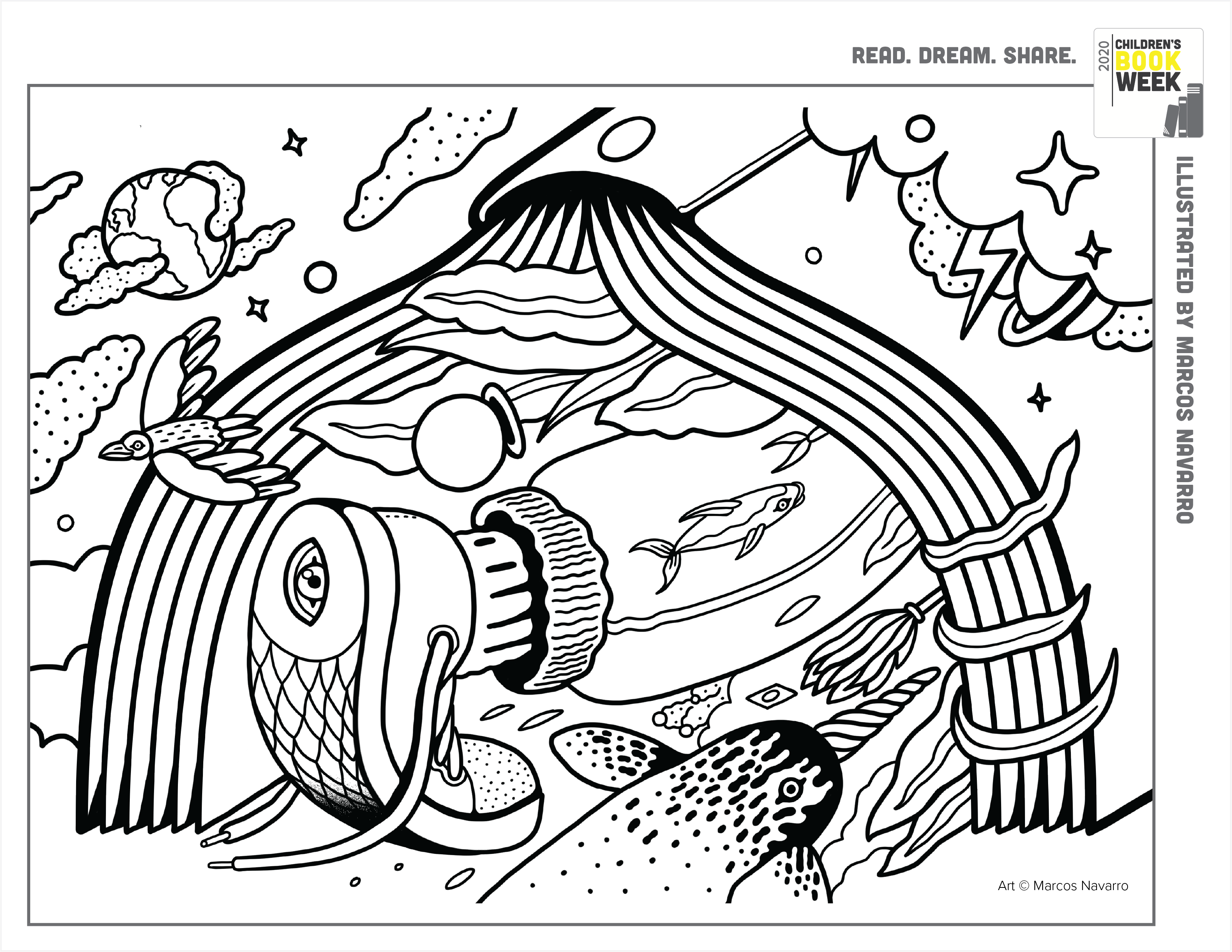 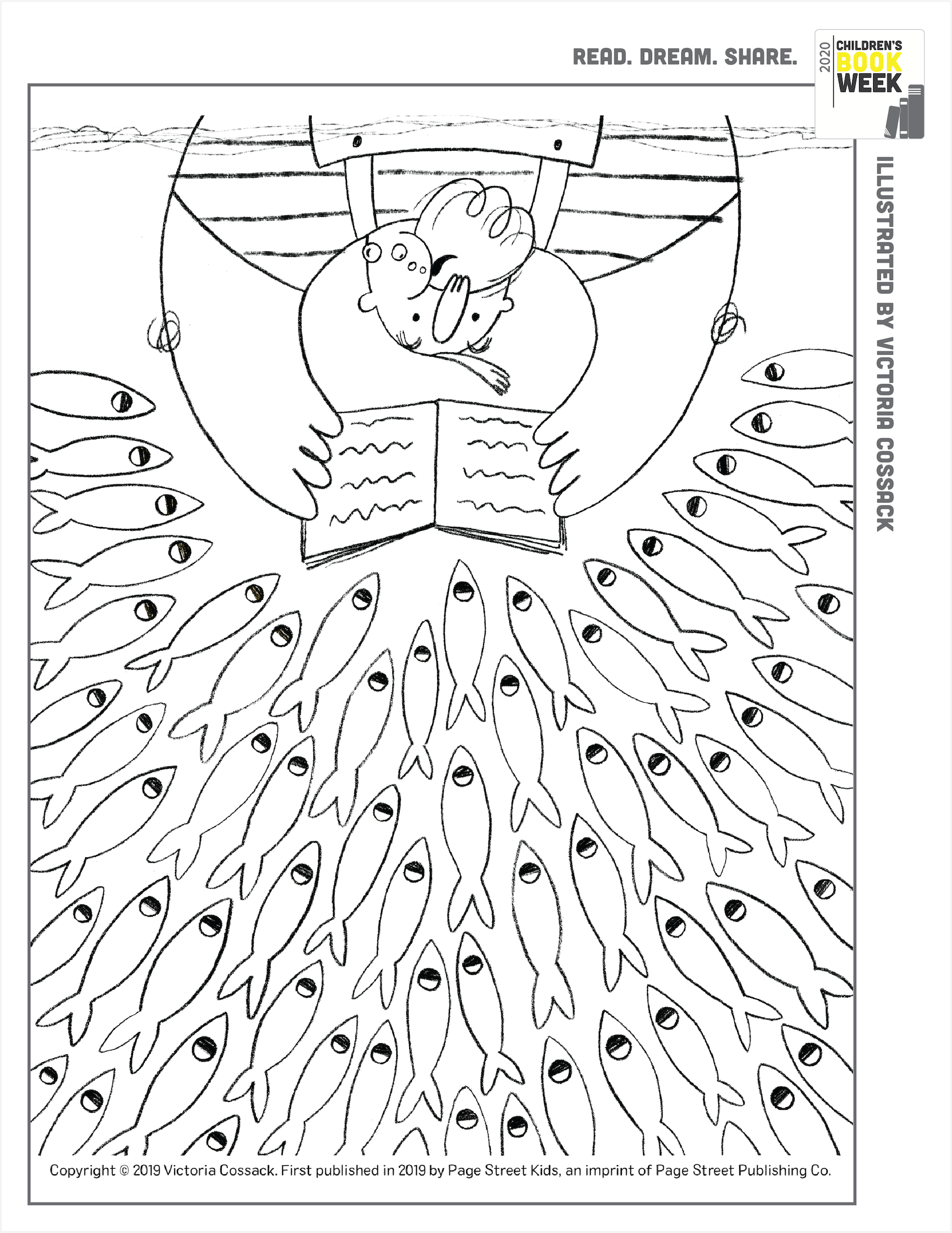 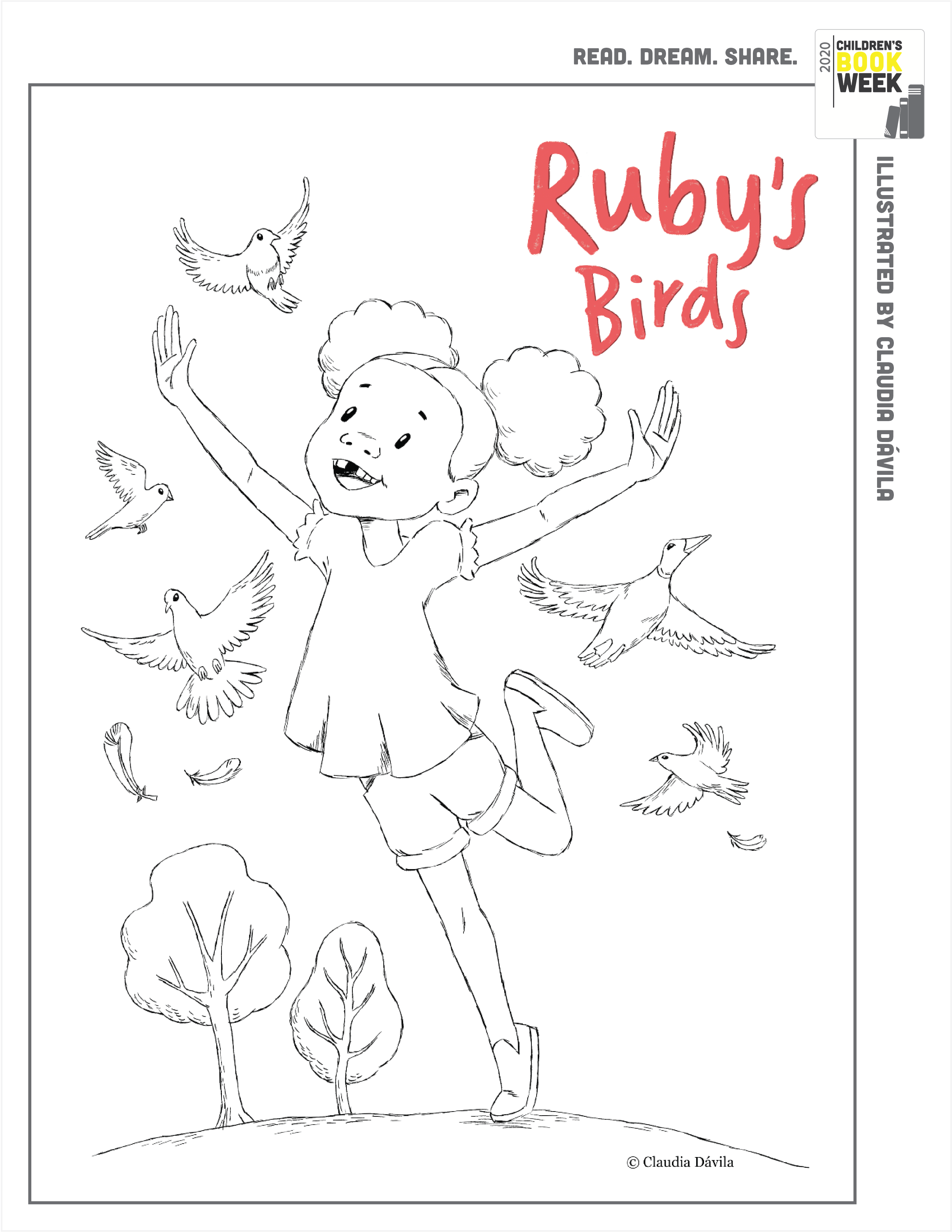 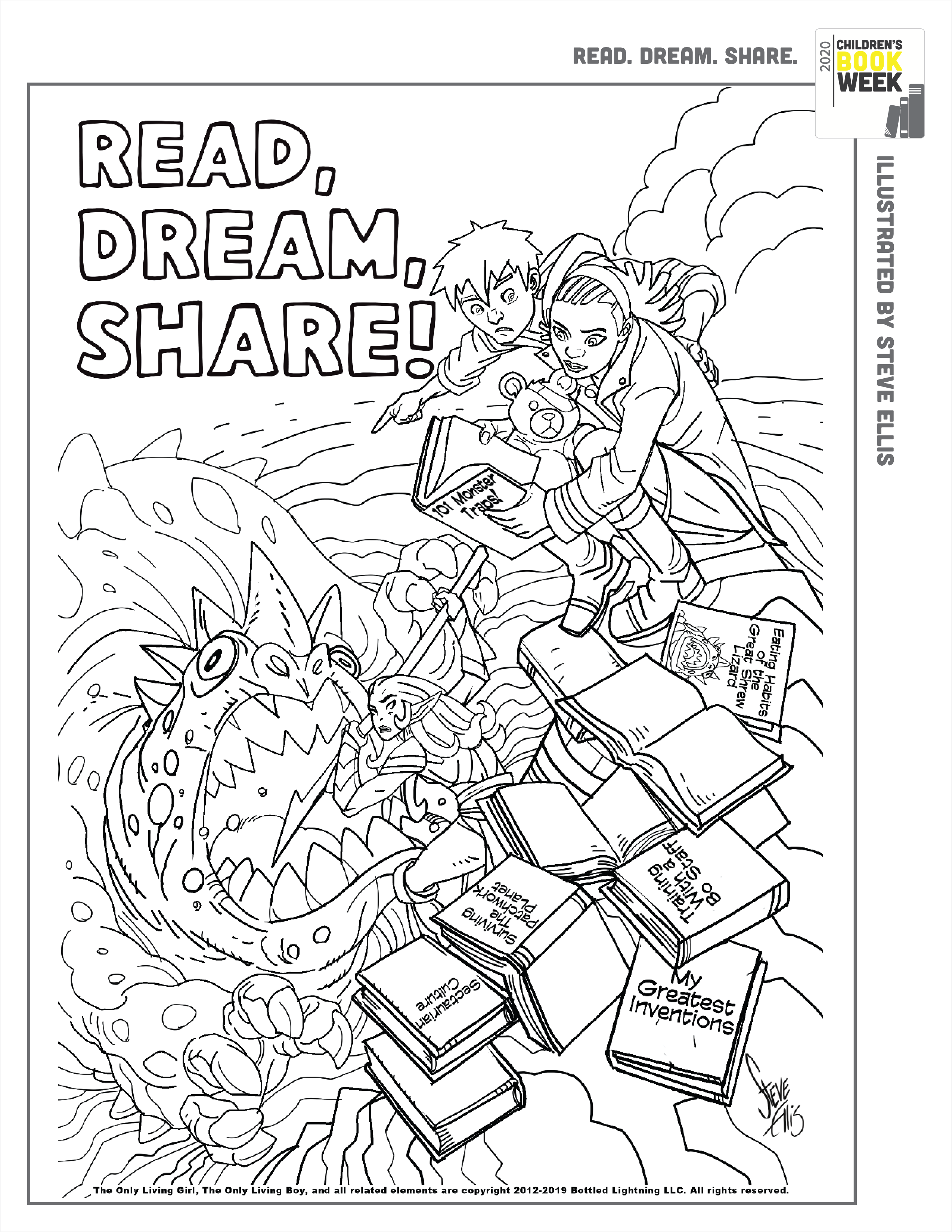 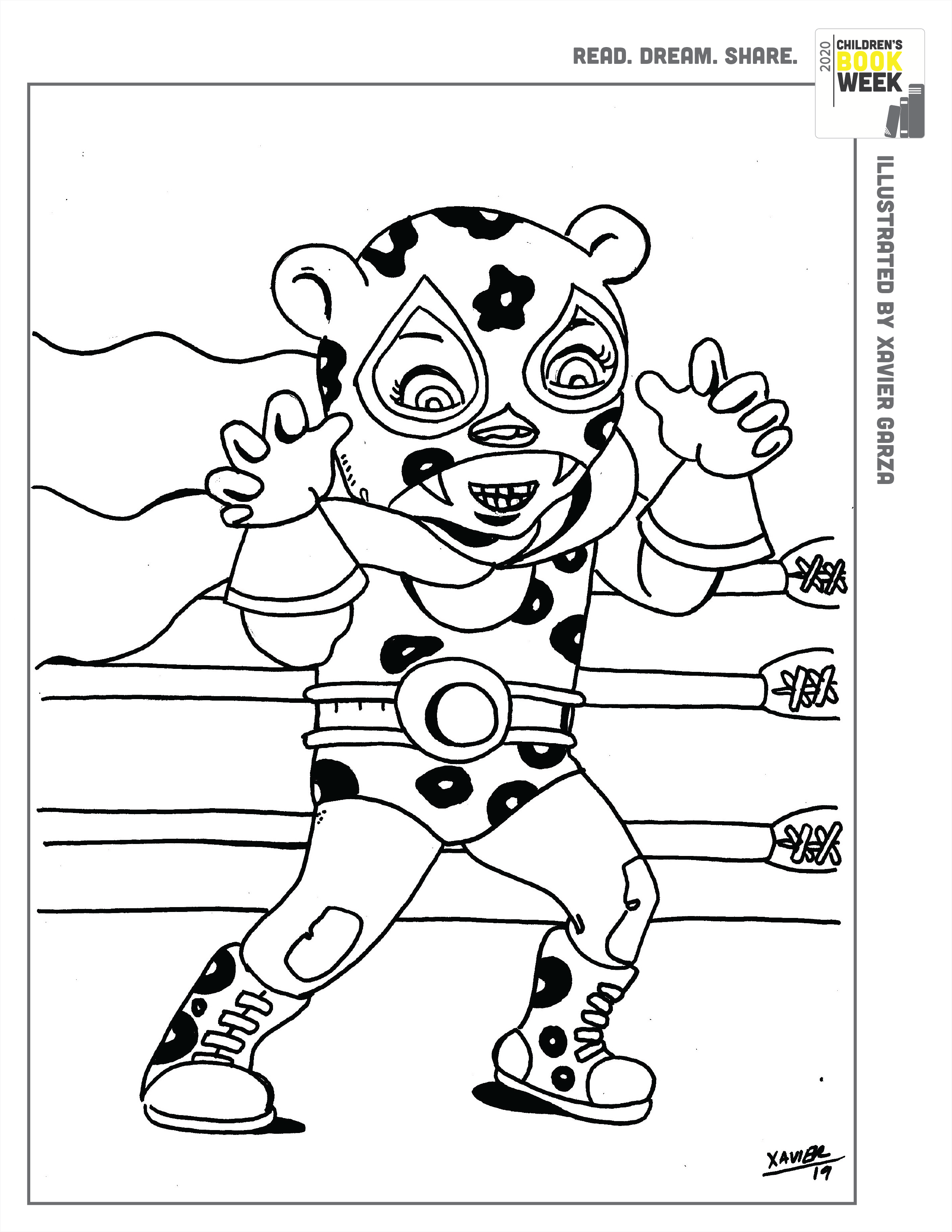 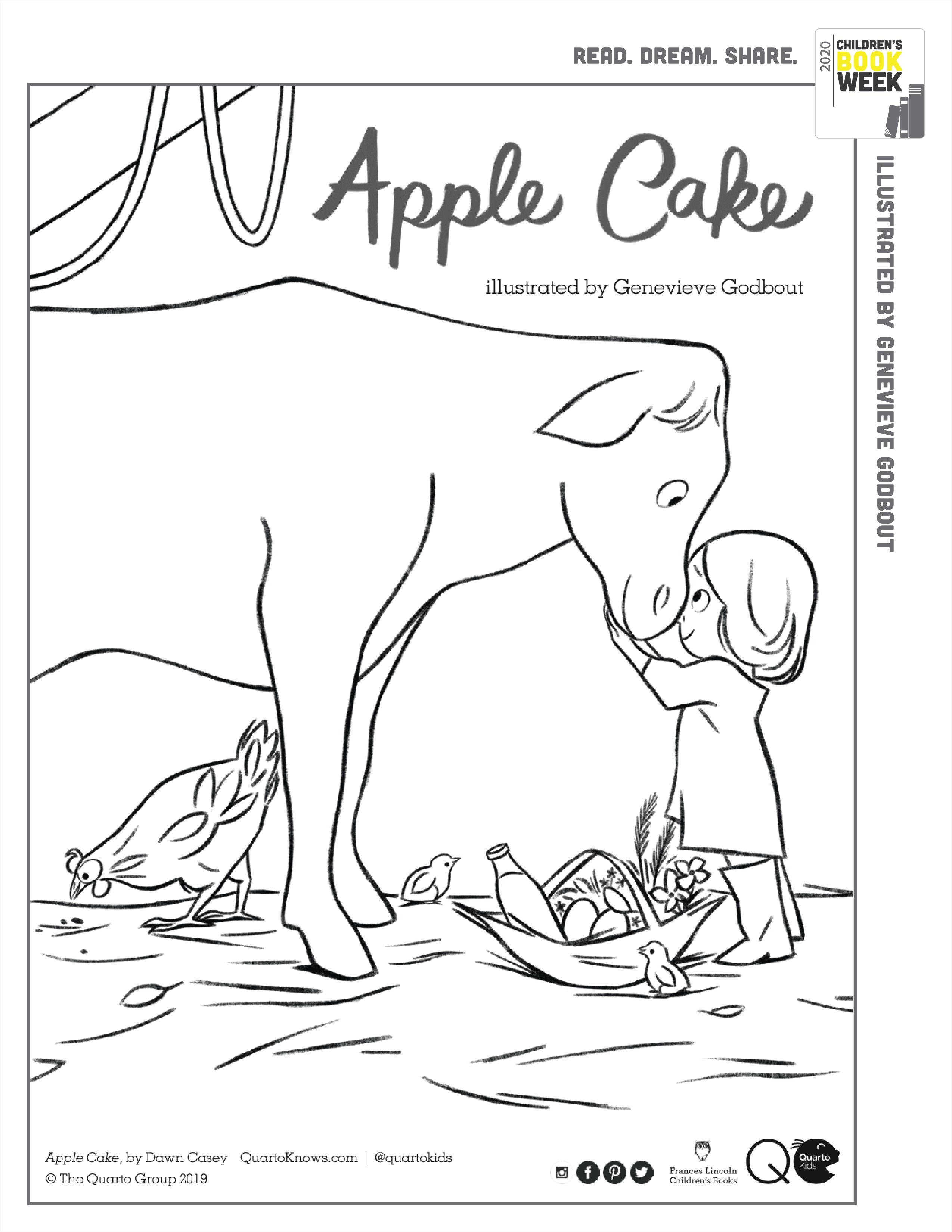 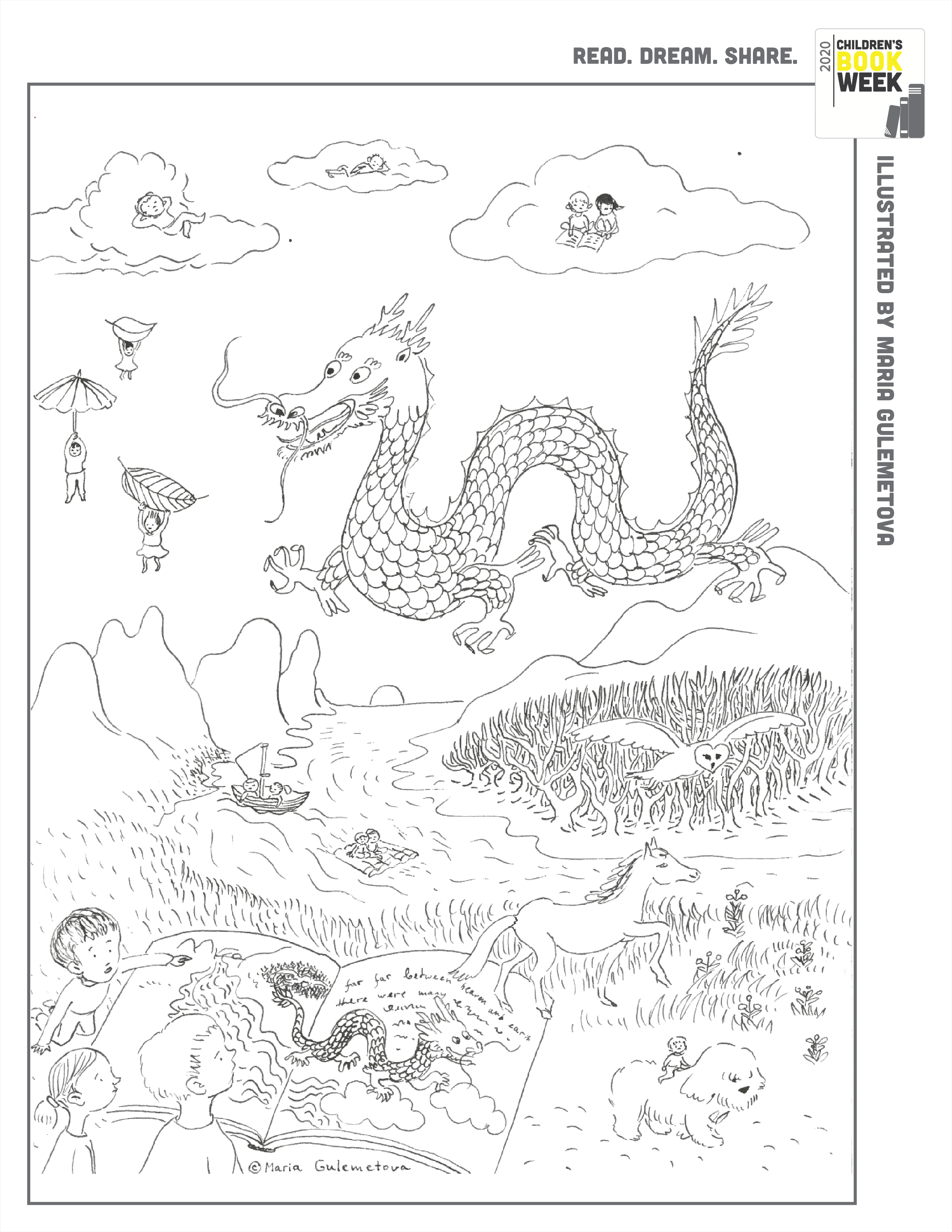 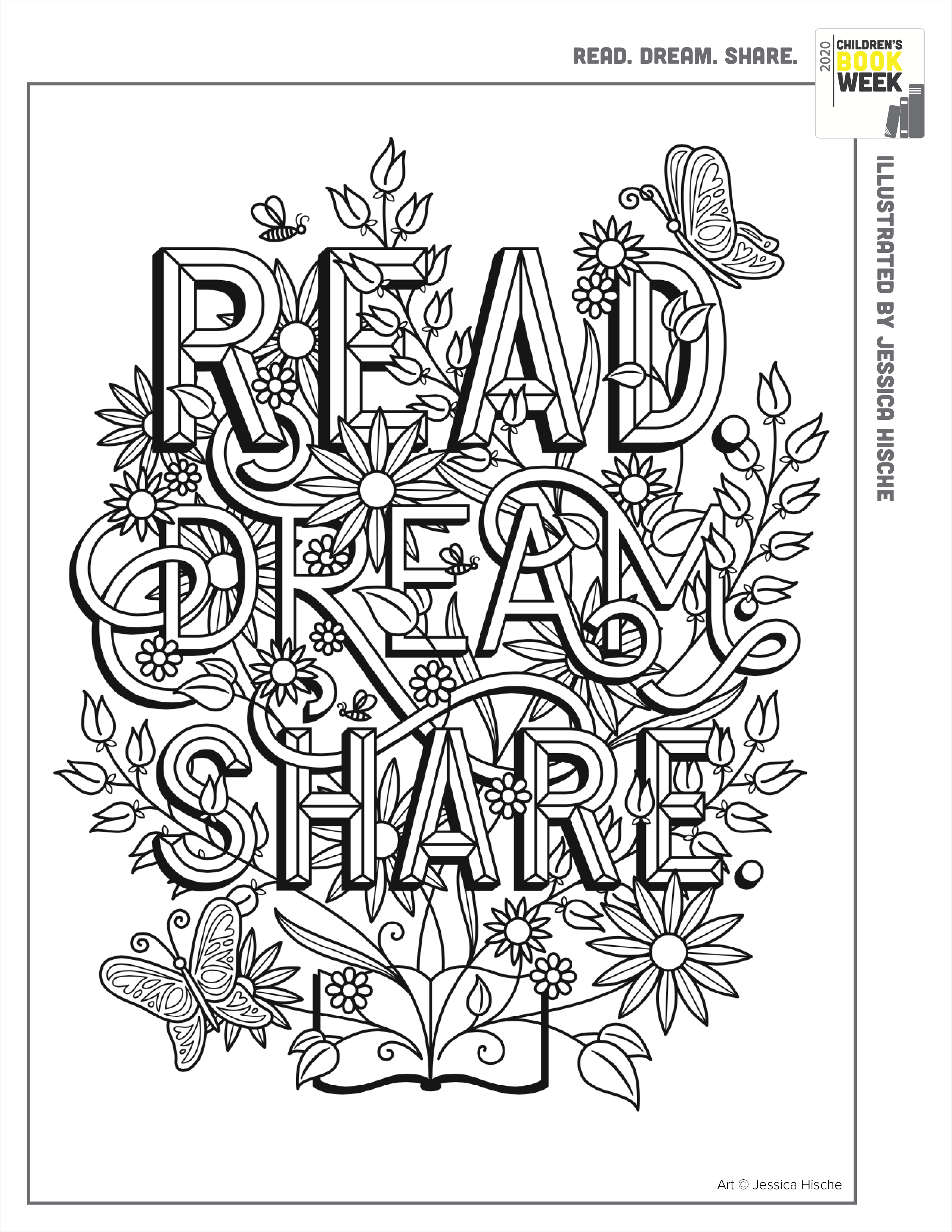 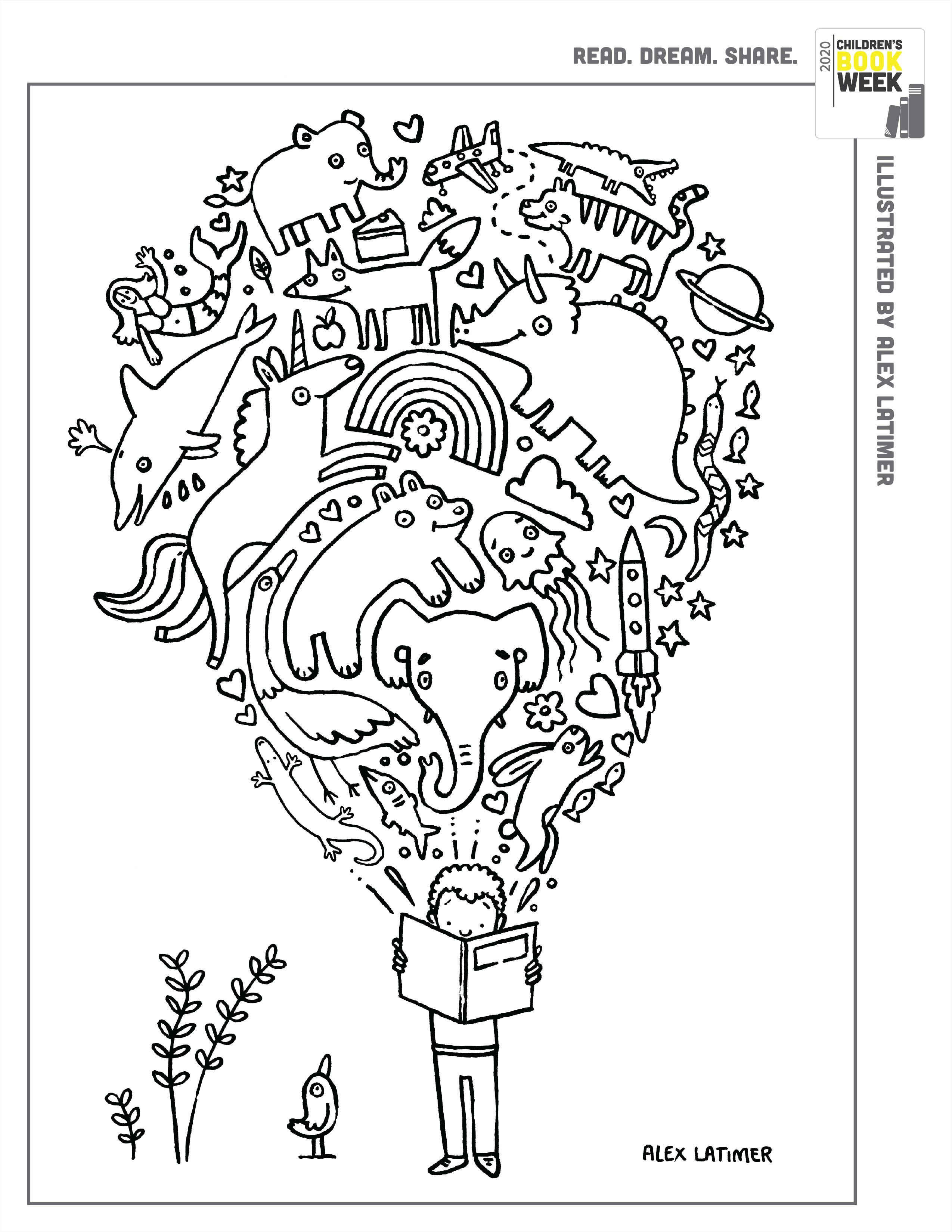 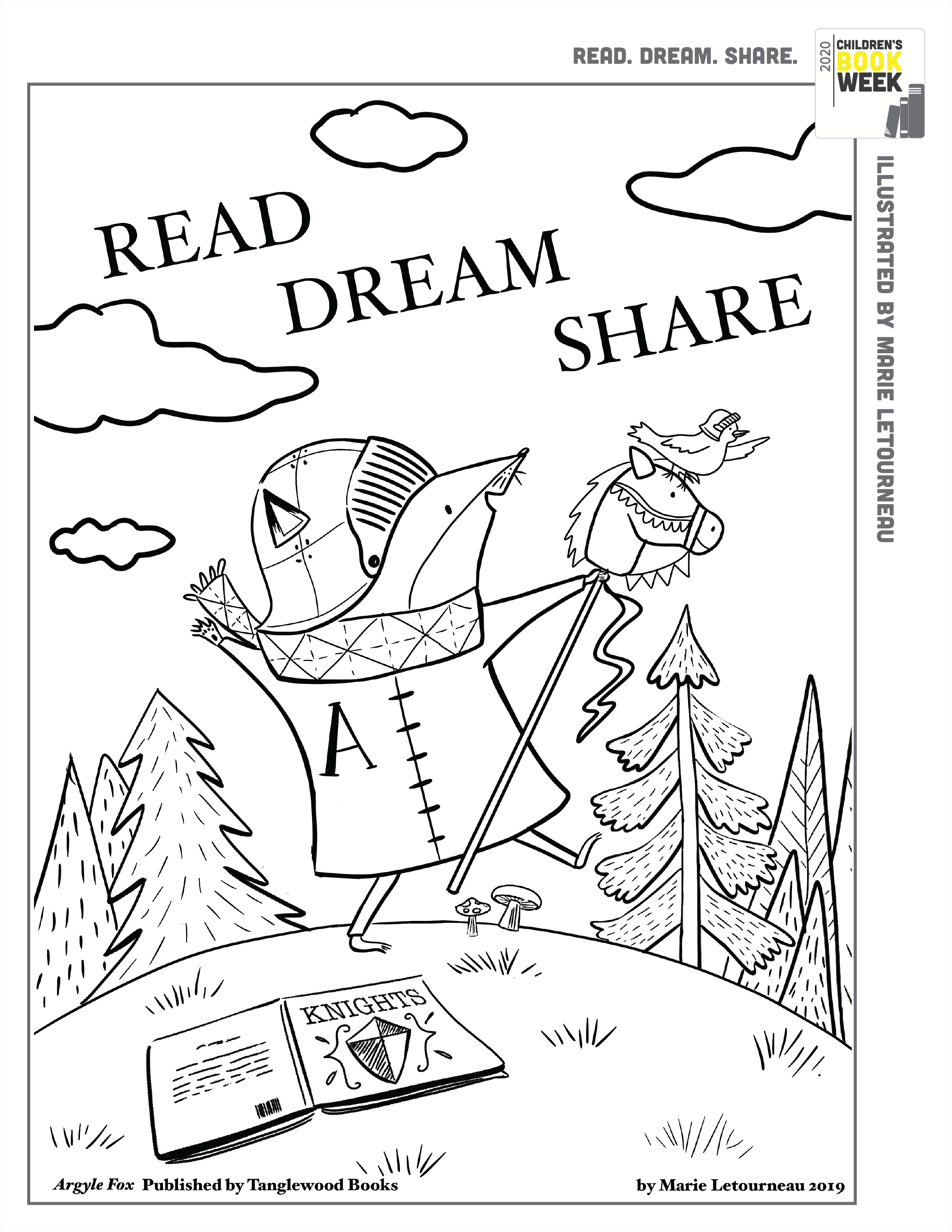 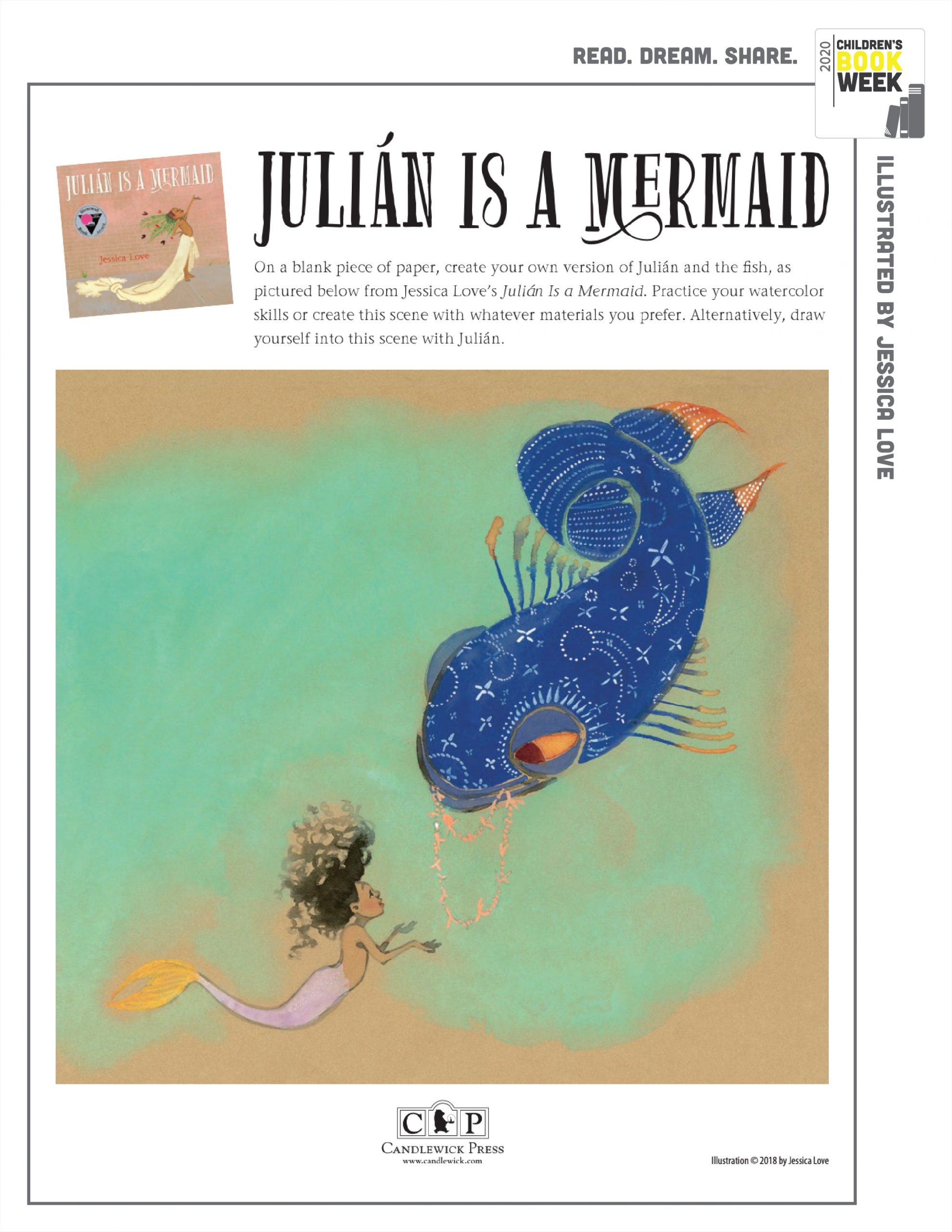 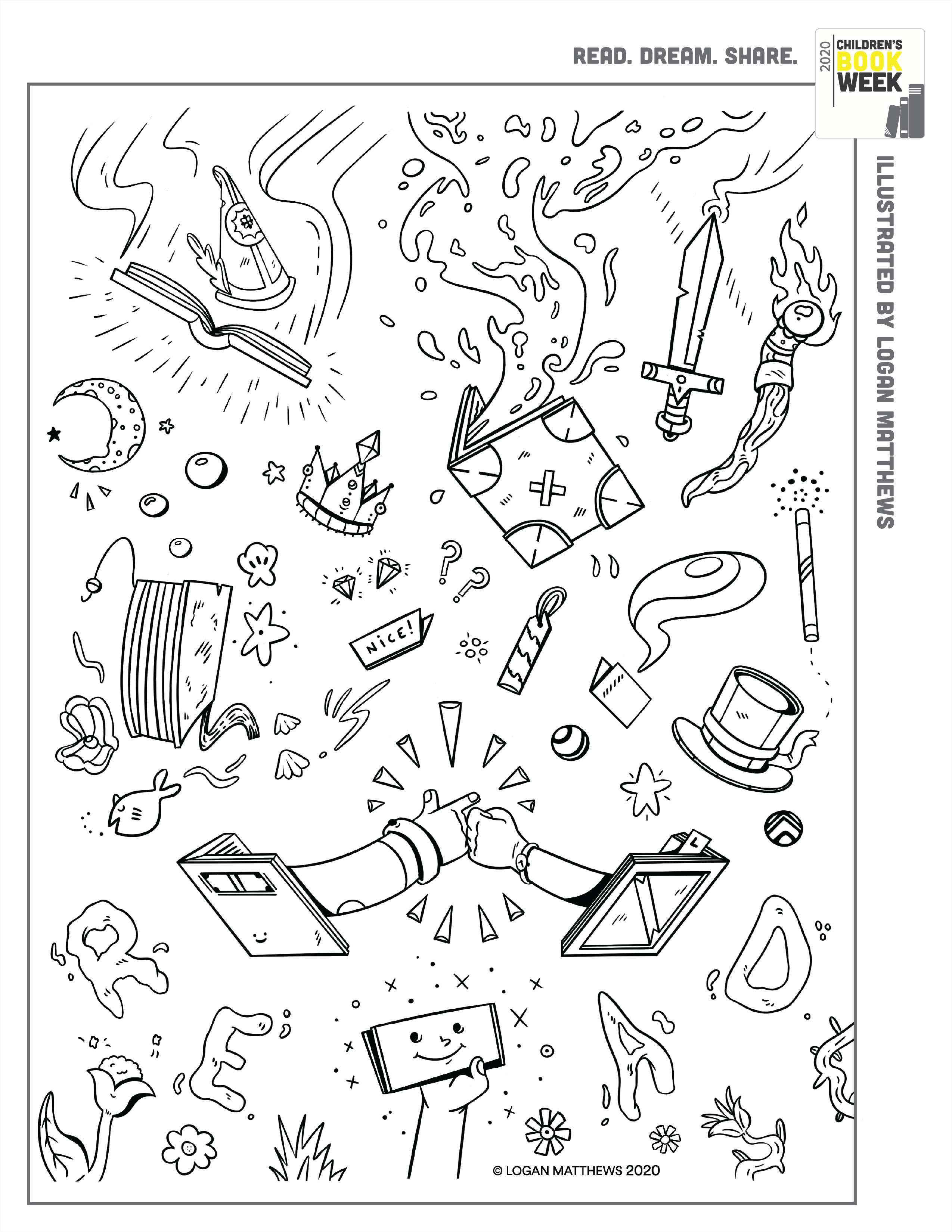 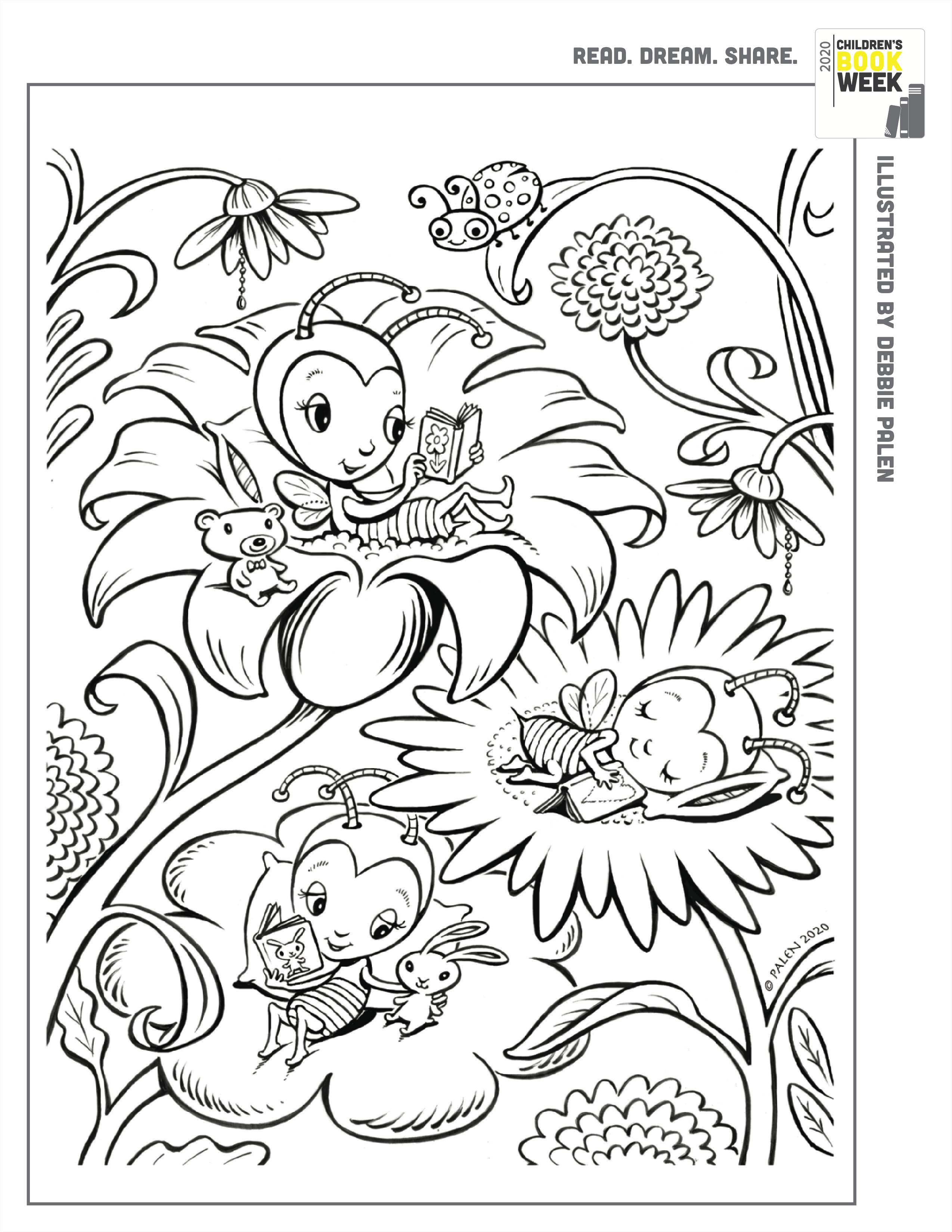 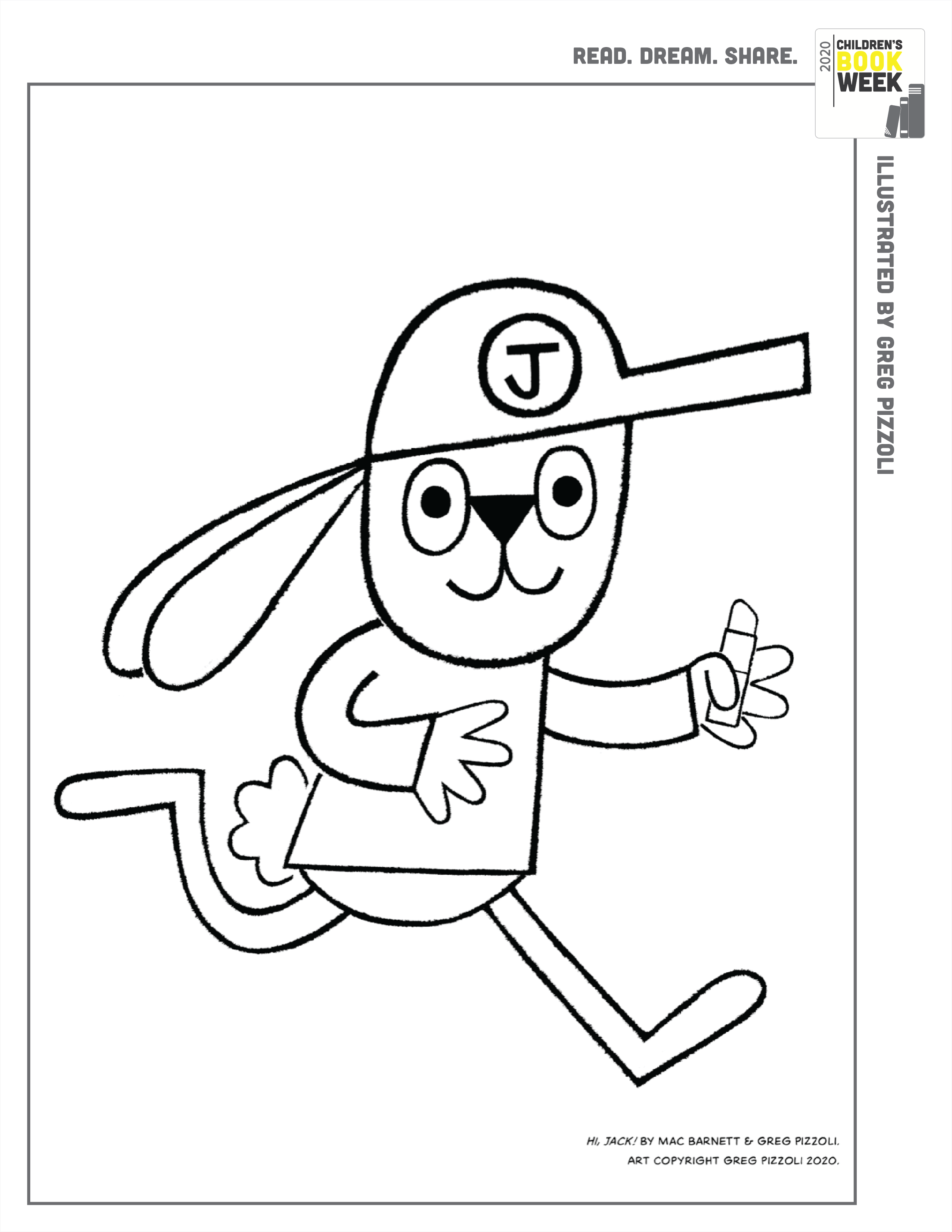 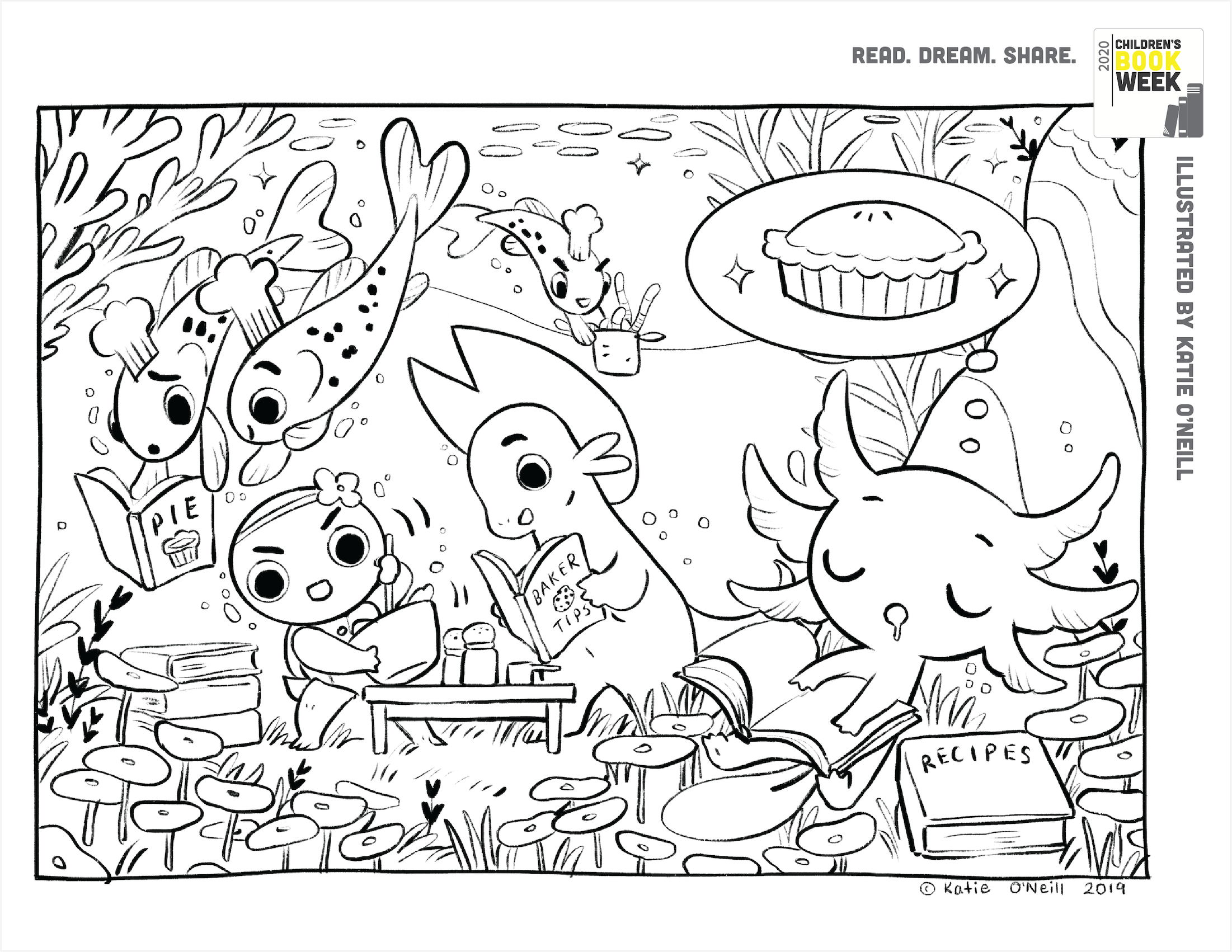 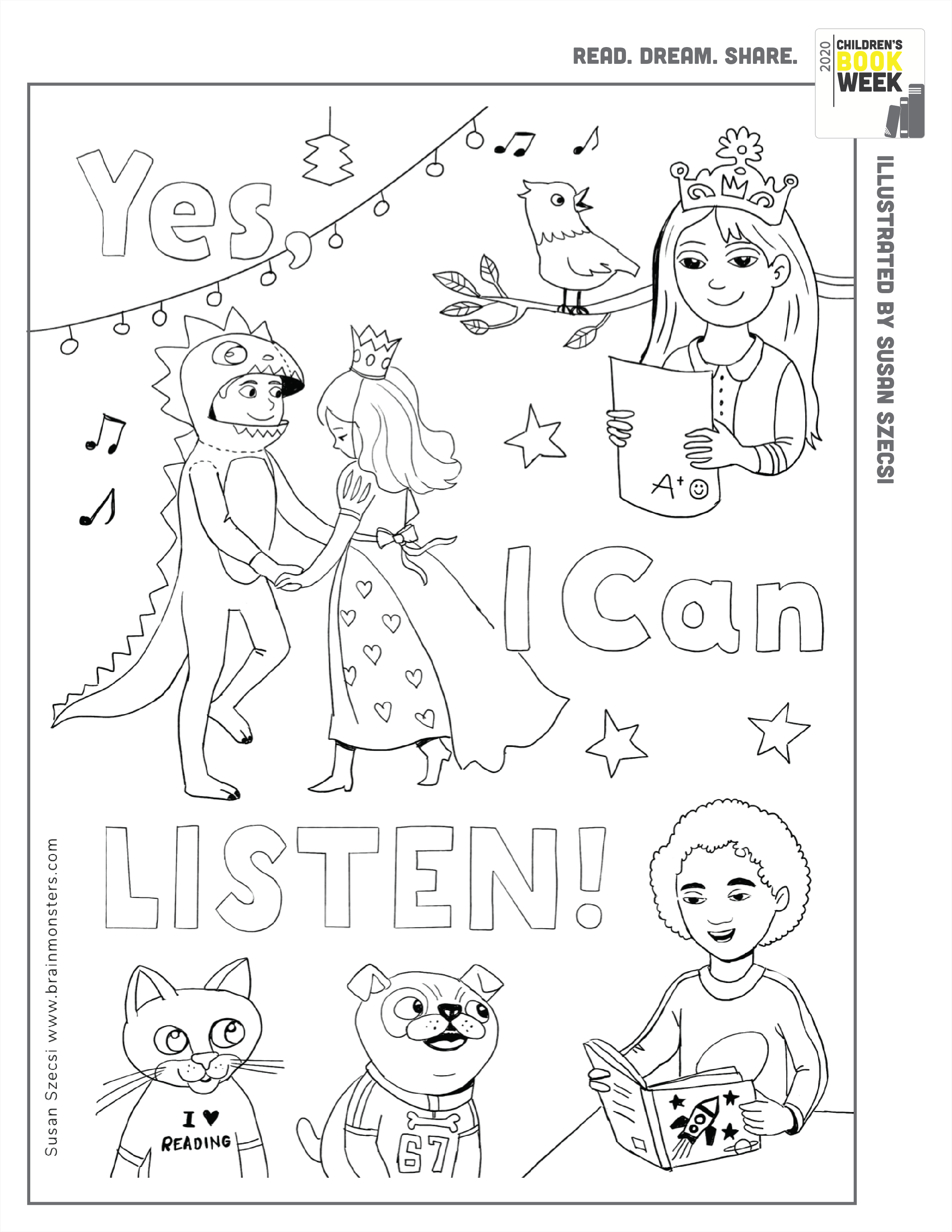 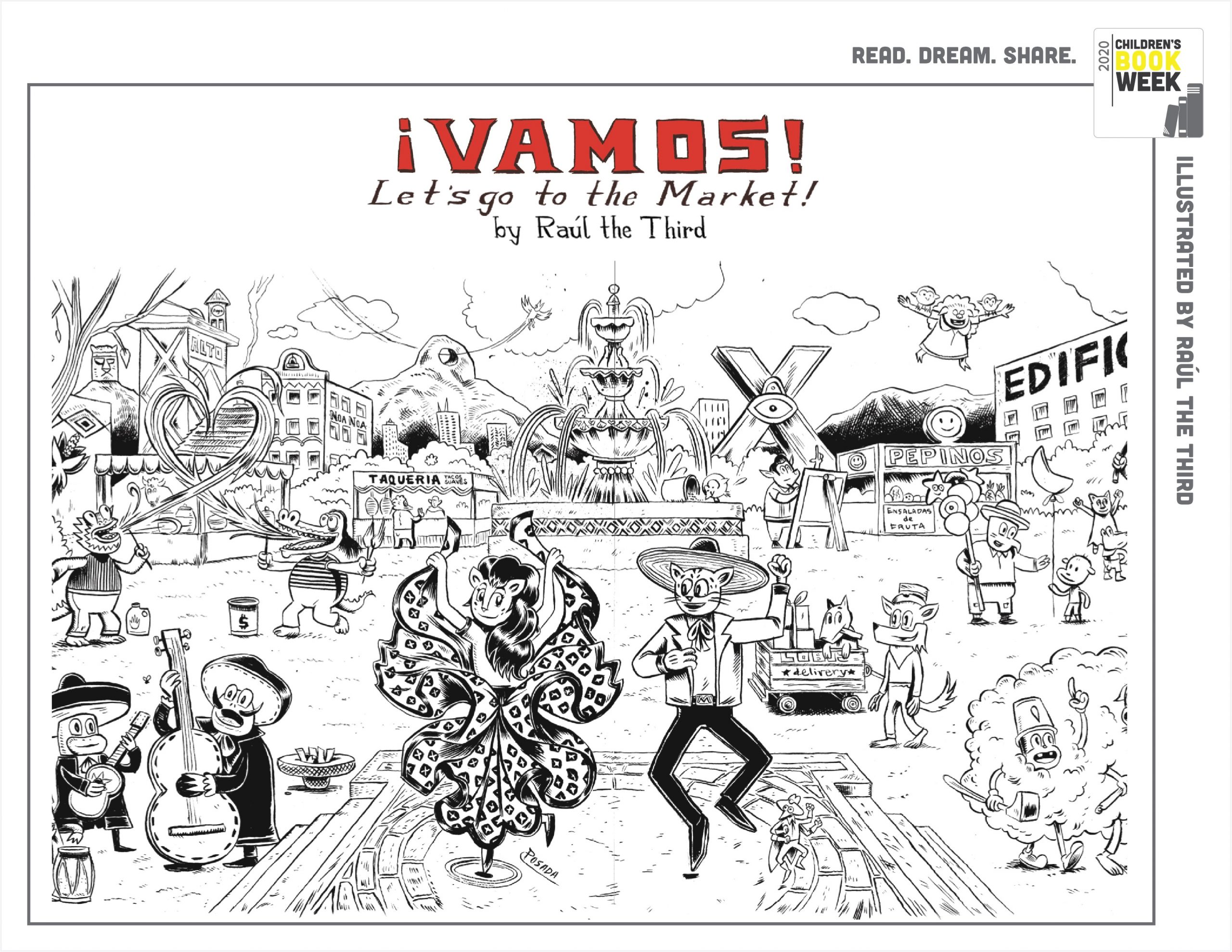 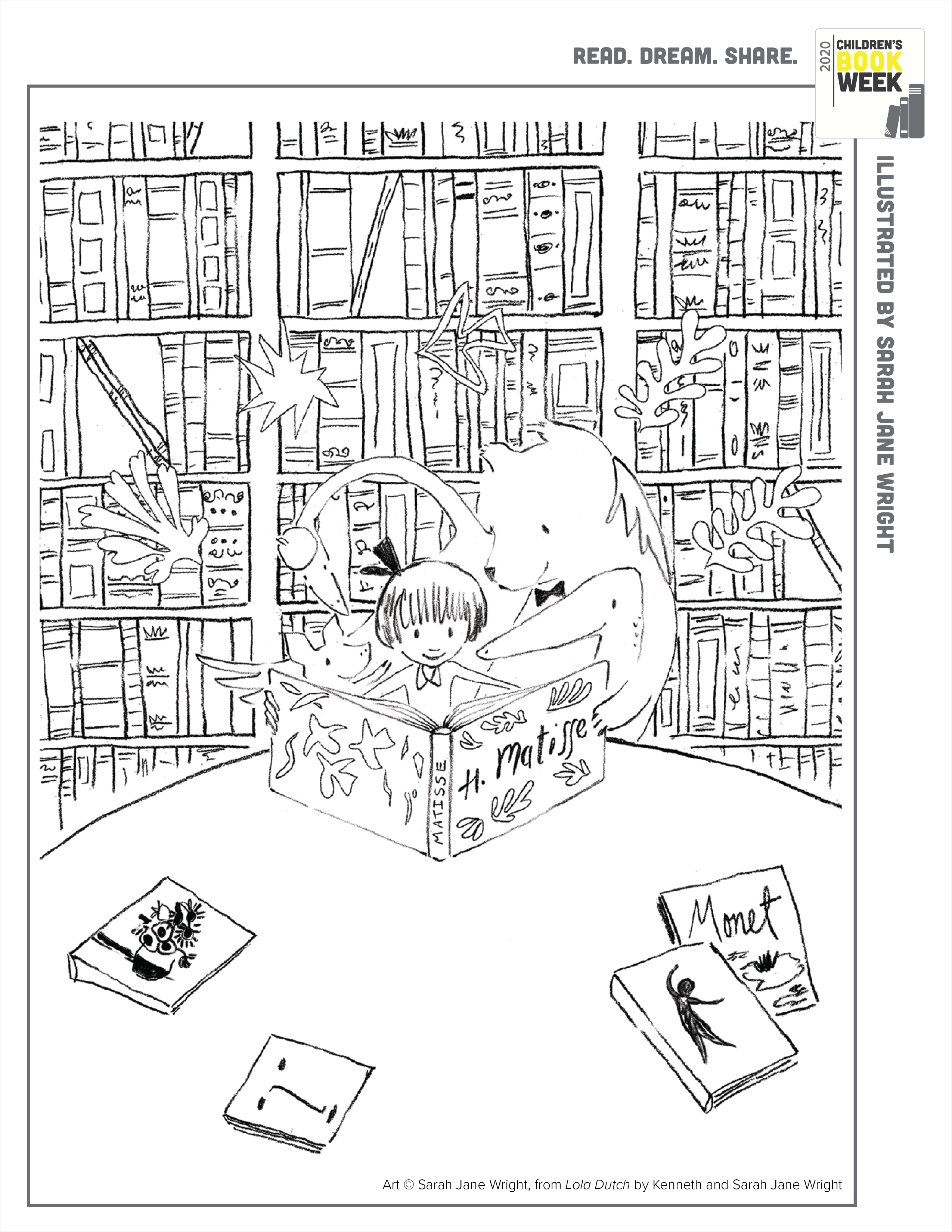 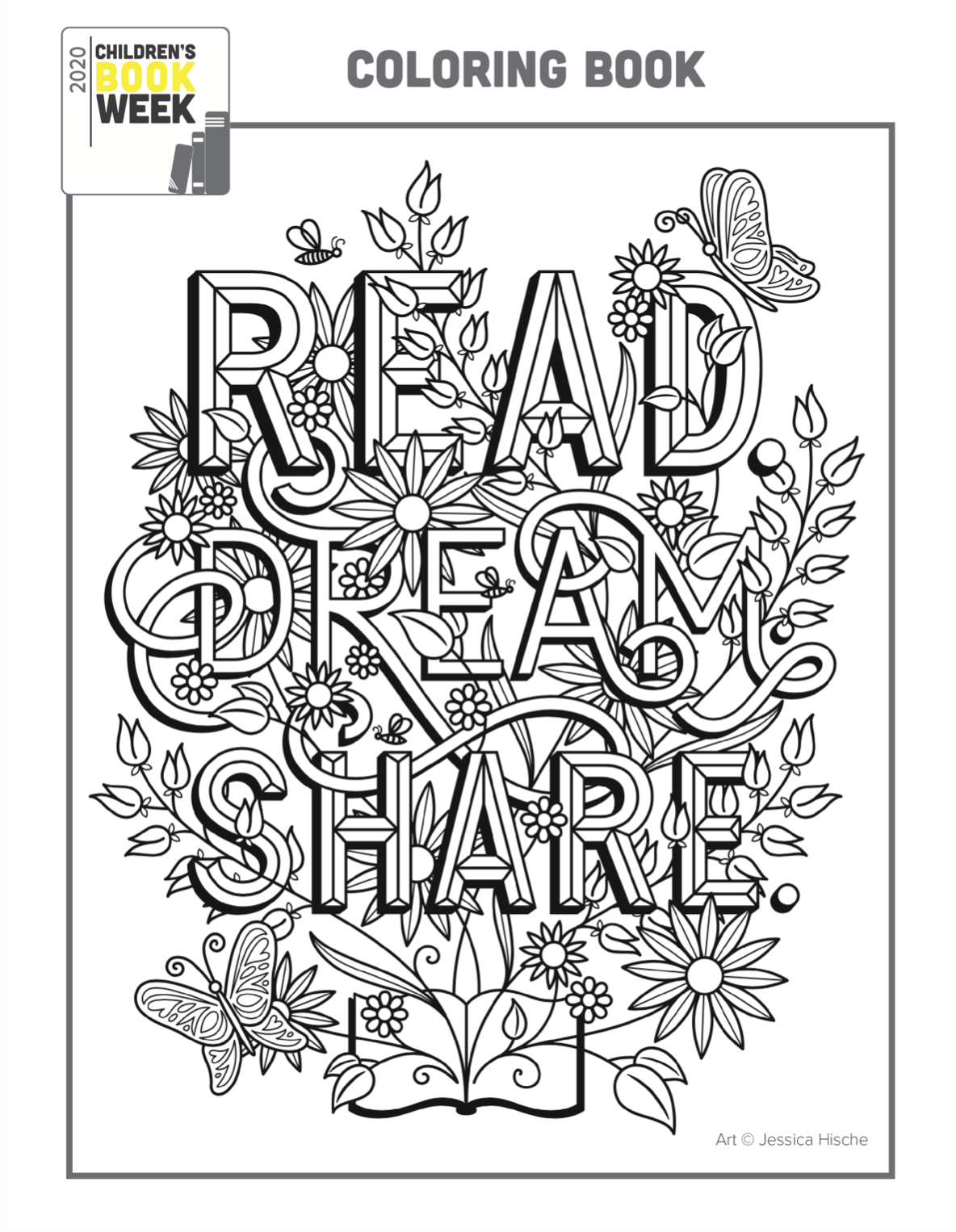 Have you downloaded the latest #BookWeek2020 Coloring Book? Featuring art by the talented [insert relevant @handle here. See below]! Get it here: https://bit.ly/2RkzKBd

About the Coloring Book Pages creators

Jessica Boehman (The RoadRunner Press)
Jessica Boehman is an illustrator and a professor of art history and fine arts living in New York City. A former Fulbright scholar in art history, she holds a master’s degree from Penn State and a doctor from the University of Pennsylvania. The Lions at Night is her first book.
| Facebook. Instagram.

Victoria Cossack (Page Street Publishing)
Victoria Cossack is a New York and Baltimore based artist and puppy enthusiast who is fueled by iced coffee. She earned a BFA in Illustration from The Maryland Institute College of Art and currently works as a freelance illustrator and designer.
| Instagram.

Claudia Dávila (WunderMill Books)
Claudia Dávila writes, illustrates, and designs books for kids of all ages. She is the author-illustrator of the picture book Super Red Riding Hood and a graphic novel series, The Future According to Luz. Born in Santiago, Chile, Claudia now makes her home in Toronto with her husband and their two kids. They spend many evenings together drawing, sketching, and making up funny characters and super silly stories.
| Behance. Twitter.

Steve Ellis (Papercutz)
Steve Ellis has been a fantasy illustrator and comics artist for the last 25 years. After illustrating for clients like Marvel Comics (Iron Man, X-men, Darkstar, and the Winter Guard), DC Comics (Green Lantern, Lobo), and Wizards of the Coast (Magic: The Gathering, Dungeons and Dragons) as well as Blizzard (World of Warcraft, Hearthstone). He co-created hit award- winning graphic novel series The Only Living Boy and its sequel The Only Living Girl, as well as High Moon. He lives with his lovely wife and two monkeys in Ithaca, NY.
| Facebook. Instagram. Twitter.

Paola Escobar (Little Bee Books)
Paola Escobar is a Colombian graphic designer and illustrator. She has worked for a variety of publishers, including Oxford University Press, Penguin Random House, Scholastic UK, Laurence King, HarperCollins, and Little, Brown Book Group; as well as a broad range of print and digital magazines. She currently works as a freelance illustrator and lives very happily in Bogotá, Colombia, with her husband and dog, Flora.
| Instagram. Twitter.

Xavier Garza (Cinco Puntos Press)
Born and raised in the Rio Grande Valley, author and luche libre aficionado Xavier Garza is a prolific author, artist, and storyteller whose work focuses primarily on his experiences growing up in the small border town of Rio Grande City. Garza has exhibited his art and performed his stories in venues throughout Texas, Arizona and the state of Washington. Garza lives in San Antonio, Texas with his wife, Irma, and their son, Vincent.
| Facebook. Twitter.

Genevieve Godbout (The Quarto Group)
Genevieve lives in Montreal where she works as a children’s book and fashion illustrator. She studied traditional animation in Montreal and at the prestigious school of “Gobelins” in Paris. Genevieve was born and raised in Quebec, but spent 7 years in London, UK, after her stay in France. She also illustrates for clothing designers like Nadinoo and Mrs.Pomeranz creating illustrations and prints for their collections.
| Facebook. Instagram.

Maria Gulemetova (Child’s Play)
Maria was born in Sofia, Bulgaria. Her father was an illustrator, and her mother is an art historian. Their house was full of beautiful illustrated books, and she remembers spending many hours absorbed in the pictures. She attended a specialized high school, majoring in Textiles, and went on to study Textiles at the Art Academy in Sofia. Gradually, however, she discovered a love of communicating ideas through stories, which led her to the wonderful MA course at Anglia Ruskin. Currently she lives in Eugene, Oregon, with her husband and two kids, where they enjoy plenty of rain, wildlife and natural beauty.
| Twitter. Blog.

Johnny Hollick (Tumblehome Learning)
Johnny Hollick is a mixed media artist and performer from Toronto. A graduate of the University of Toronto Fine Arts program, his projects have been featured in galleries and venues in a variety of forms, from traditional painting to multimedia performance. Presently his work is largely collage-based, generated digitally from textures, then reworked physically with scissors and wit.

Sarah Jung (Scholastic)
Sarah Jung was born in Maine and grew up in Vancouver, Canada. She has a BFA in Illustration, Creative Writing, and Book Arts from Maryland Institute College of Art. Sarah now resides in Baltimore, Maryland, as an illustrator and children’s book creator alongside her friends and their little cats. Follow her @sarahjungart (Twitter and Instagram) and on sarahjungart.squarespace.com.
| Facebook.

Alex Latimer (Peachtree Publishing Company)
Alex Latimer has written several picture books for children, including Am I Yours?, The Boy Who Cried Ninja, and Pig and Small. He lives in South Africa near the border of a national park, so when not writing or drawing, he spends his free time shooing baboons out of his lounge. Visit his website at www.alexlatimer.co.za.
| Facebook. Instagram. Twitter.

Marie Letourneau (Tanglewood Publlishing)
Marie Letourneau was born in Queens, New York, and her family moved to Long Island when she was five years old. She has been interested in illustrating books for as far back as she can remember. As a child, she would make little books out of paper and staples and give them to family members as gifts. Marie studied fine arts at Hofstra University where she earned her BFA in the New College. Marie is a full-time illustrator and graphic artist. She was the author and illustrator for Argyle Fox, and the award-winning The Mice of Bistrot des Sept Frères, and Marie illustrated Is a Worry Worrying You? and The Tiptoe Guide to Tracking Fairies (all books published by Tanglewood Books). She has done design work for (and appeared on) “The Nate Berkus Show,” and “The Revolution” with fashion icon Tim Gunn. In 2014, Marie was a finalist in the Martha Stewart American Made Awards for her stationery shop Le French Circus, on Etsy. Marie and her family live on Long Island, New York. Connect with Marie: http://www.marieletourneau.com/.
| Facebook. Instagram.

Jessica Love (Candlewick Press)
Jessica Love is an illustrator and a New York–based actor. She has a BA in studio art from the University of California, Santa Cruz, as well as a graduate degree from Juilliard.
| Instagram. Twitter.

Logan Matthews (Crimson Dragon Publishing)
Logan Matthews is a 2D/3D artist in Farmington, Michigan. His work is often light-hearted and fun with bright colors and strange characters. He is inspired most by cartoons, music, video games, history and people. In his free time, he likes to bike and try delicious new foods.
| Instagram.

Katie O’Neill (Oni Press)
Katie O’Neill is an Eisner and Harvey Award-winning illustrator and graphic novelist from New Zealand. She is the author of Princess Princess Ever After, Aquicorn Cove, The Tea Dragon Society, The Tea Dragon Festival, and Dewdrop, all from Oni Press. She mostly makes gentle fantasy stories for younger readers, and is very interested in tea, creatures, things that grow, and the magic of everyday life.
| Instagram. Twitter.

Debbie Palen (Red Chair Press)
Debbie Palen is a children’s book illustrator working in a combination of digital and traditional mediums. Currently focused on the world of picture books and educational publishing, her work has been applied to a broad range of subjects. Debbie loves to work with humor, diversity and expression, and is especially drawn to the unique personalities of animals. Debbie’s work has been been recognized by Print, 3×3, Mom’s Choice Awards, and The Educational Press Association of America. Her cover received the “Illustration of the Year “ award from Highlights in 2012. Visit Debbie’s website or check out her frequently updated blog.
| Facebook. Instagram. Twitter.

Raúl the Third (Houghton Mifflin Harcourt)
Raúl the Third is a Pura Belpré Award-winning illustrator and the author/illustrator of Vamos! Let’s Go to the Market. He is also the illustrator for the Lowriders in Space series by Cathy Camper and is currently working on a YA graphic novel with David Bowles. He grew up between El Paso, TX and Ciudad Juárez, México and now lives in Boston, MA with colorist Elaine Bay. Visit him at www.artbyraul.com, on Twitter: @raulthe3rd and on Instagram: @raulthethird.info.
| Facebook.