As a celebration of the centennial of Children’s Book Week we’re presenting a 12-artist Collaborative Poster! These beloved children’s book illustrators (see below) have contributed their beautiful and inspiring artwork to help us celebrate our 2019 theme,
Read Now ● Read Forever.

Throughout 2019 the full poster was revealed one panel at a time. Each individual illustration is available to print and distribute to children, teens, and book lovers everywhere. Find us on any social media platform using #BookWeek100!

Was revealed one panel at a time. All panels are revealed and the poster is available for download. 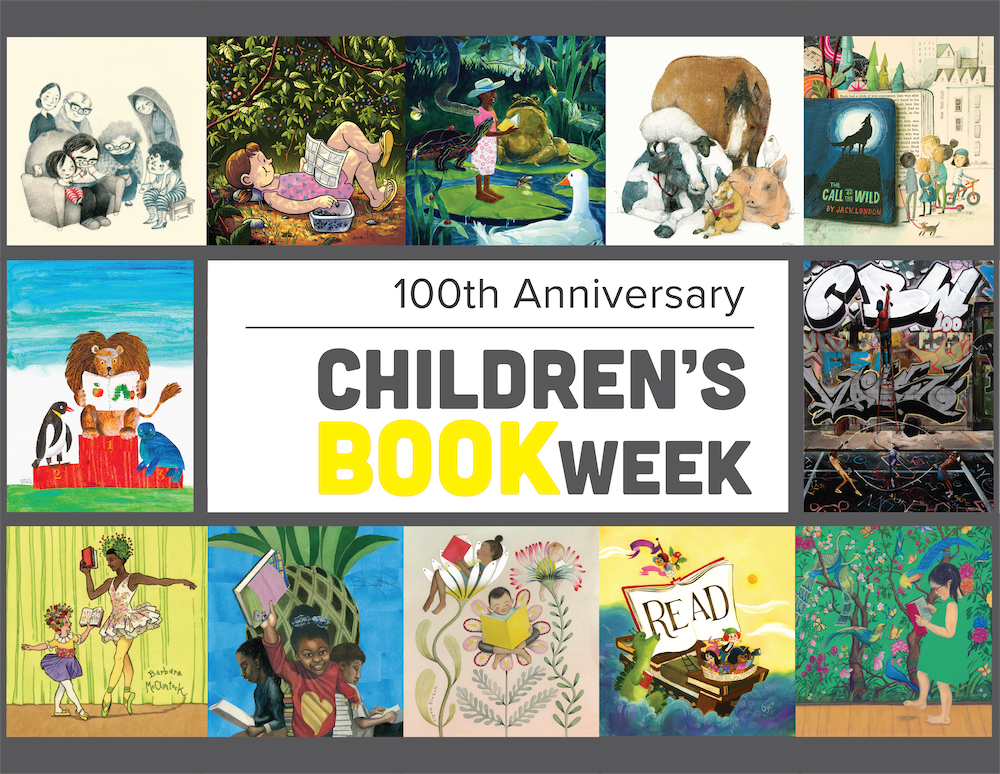 Download and print a “mini-poster” featuring the art of each collaborative poster panel as we reveal them. 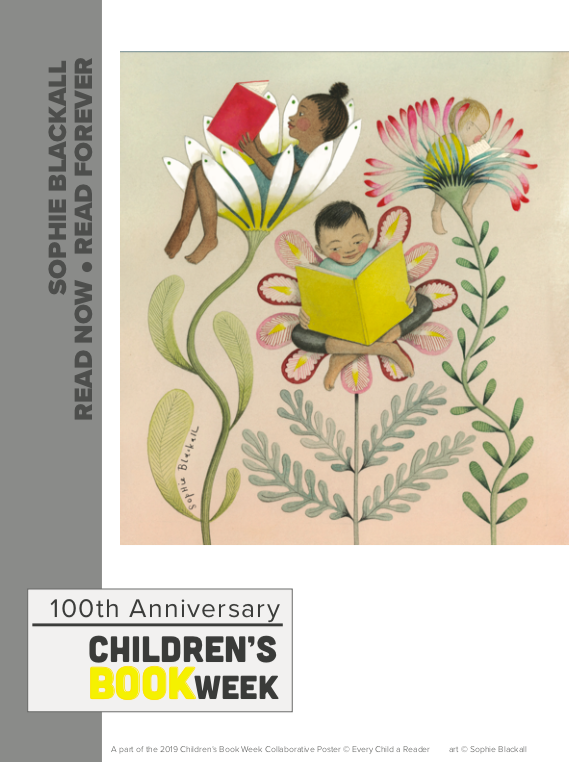 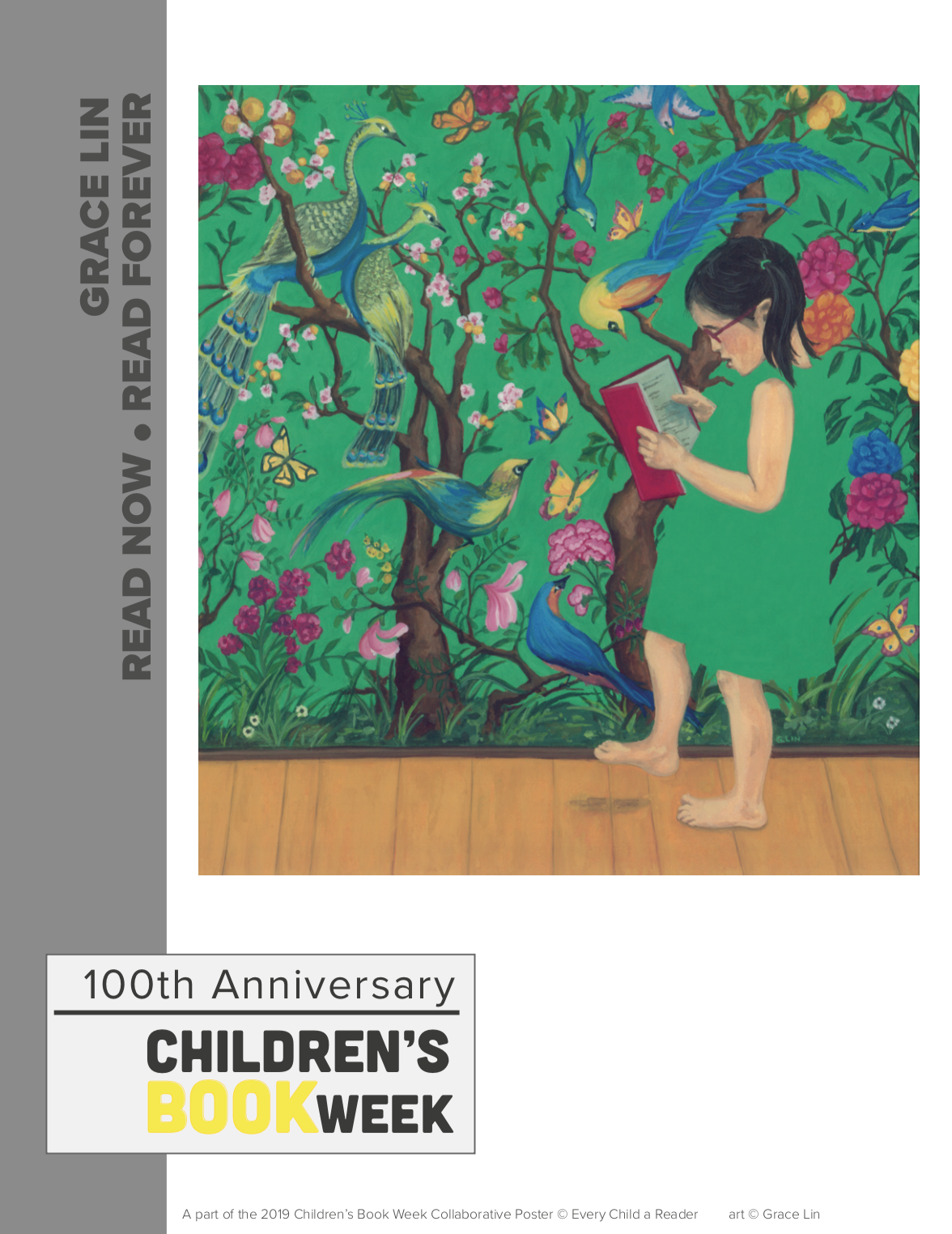 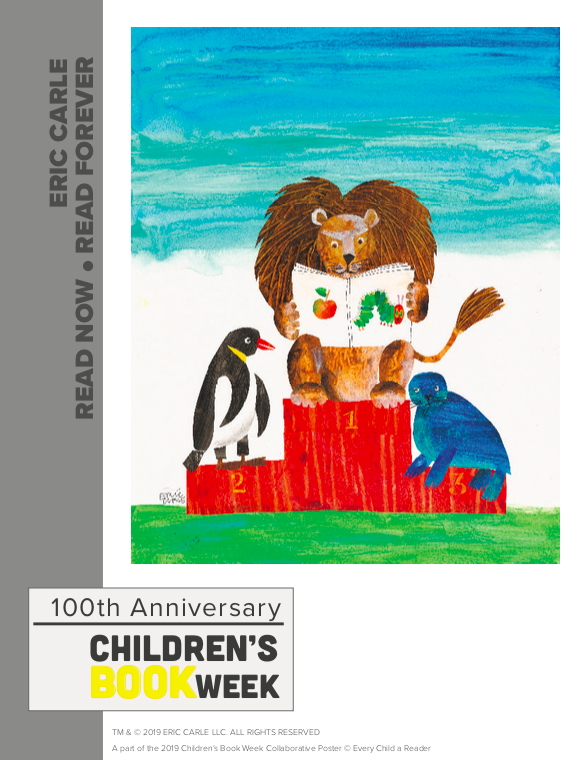 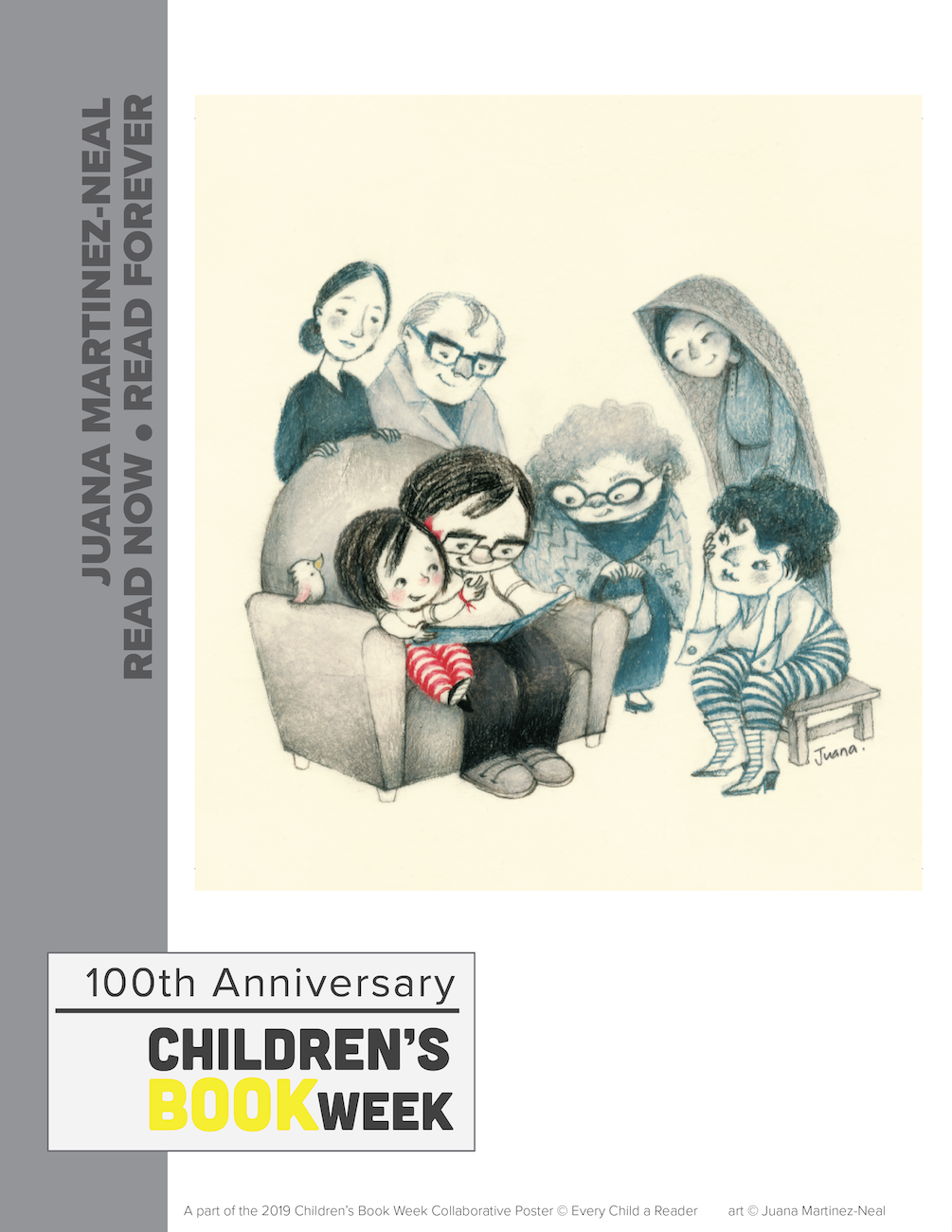 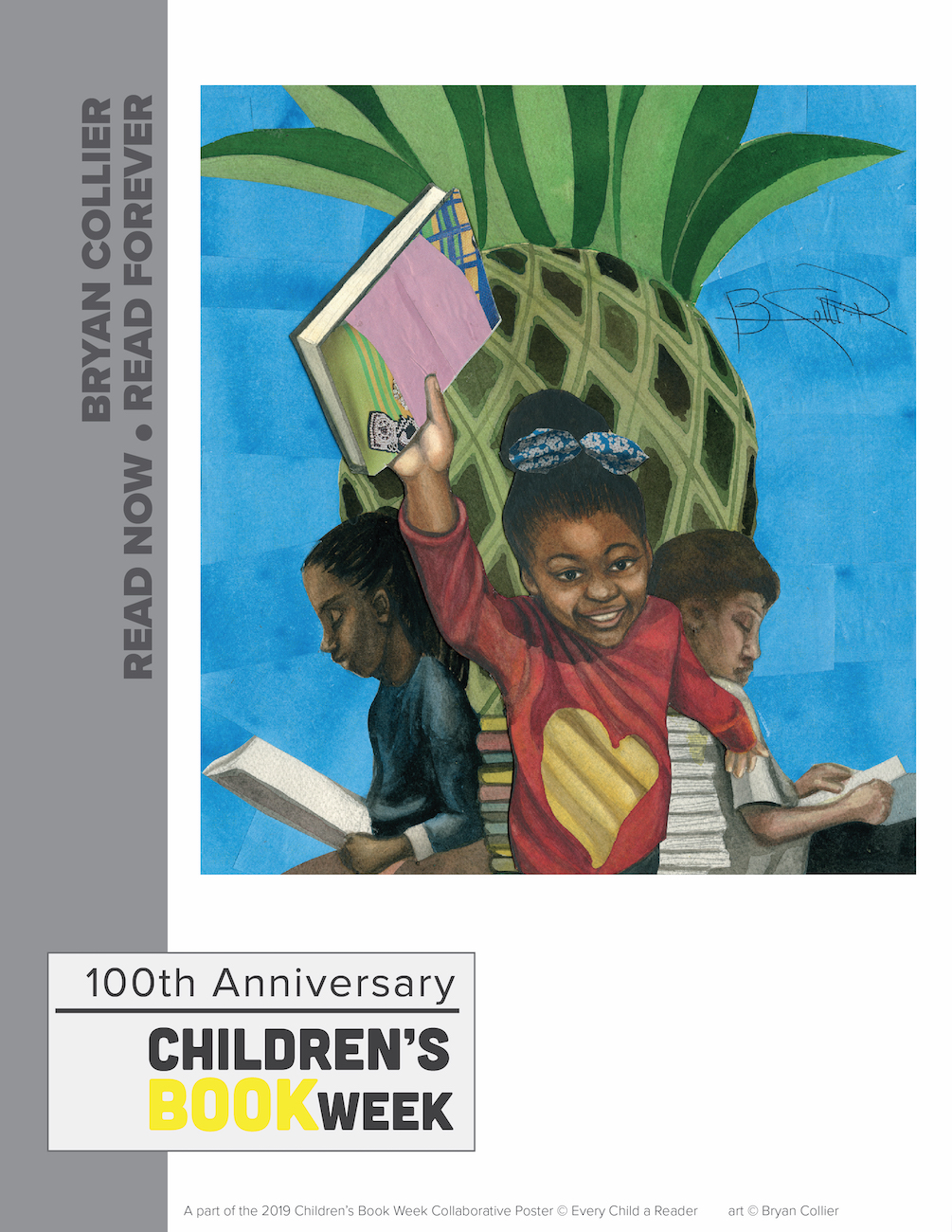 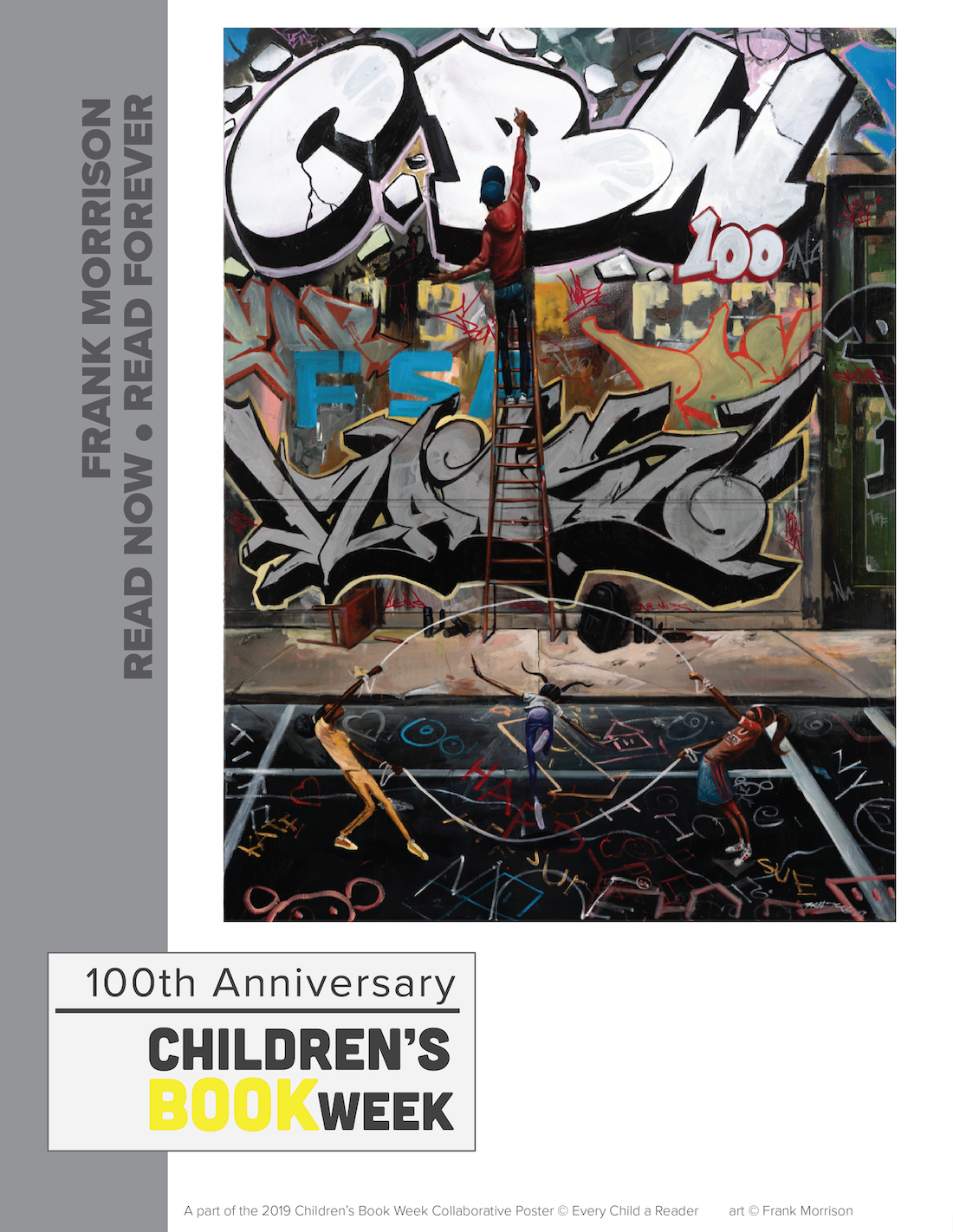 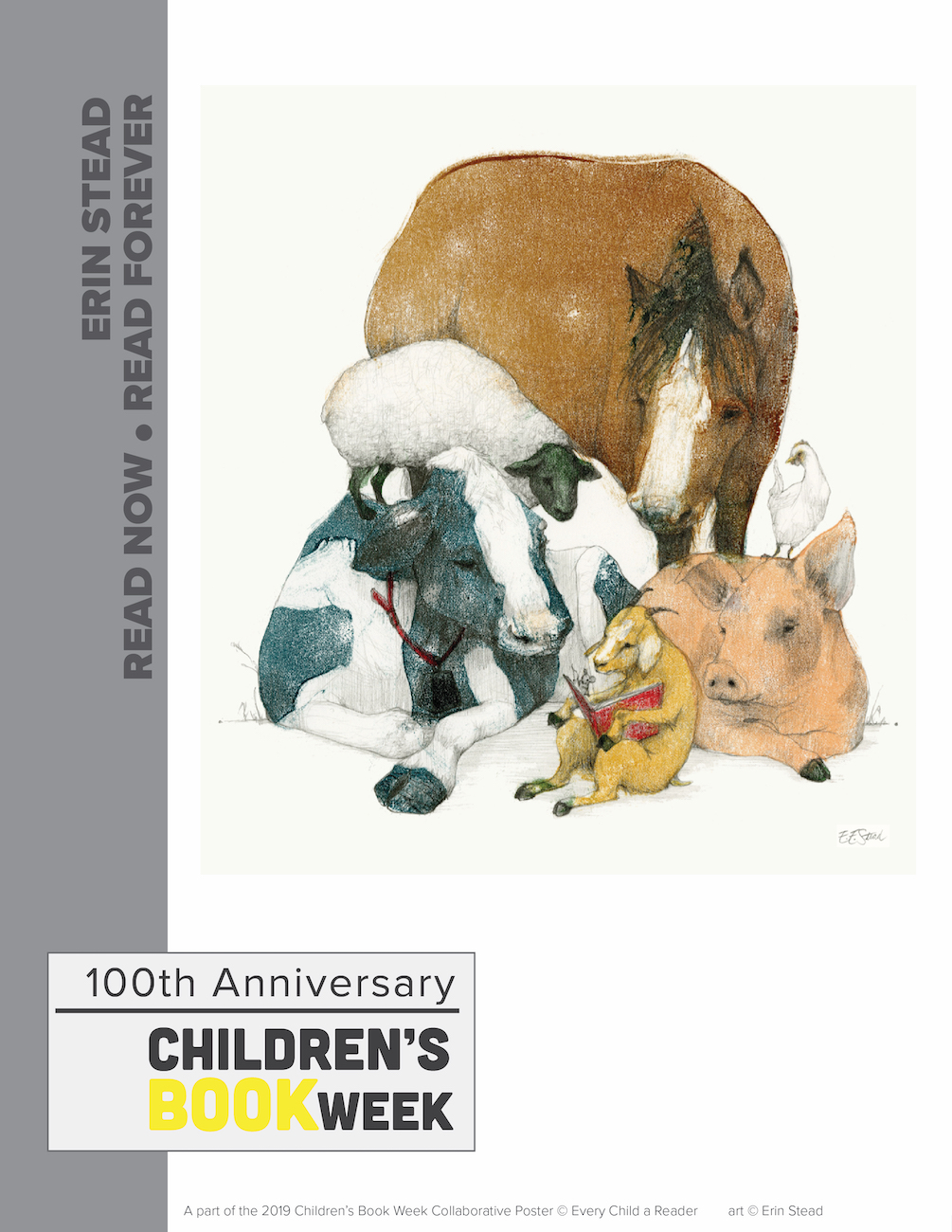 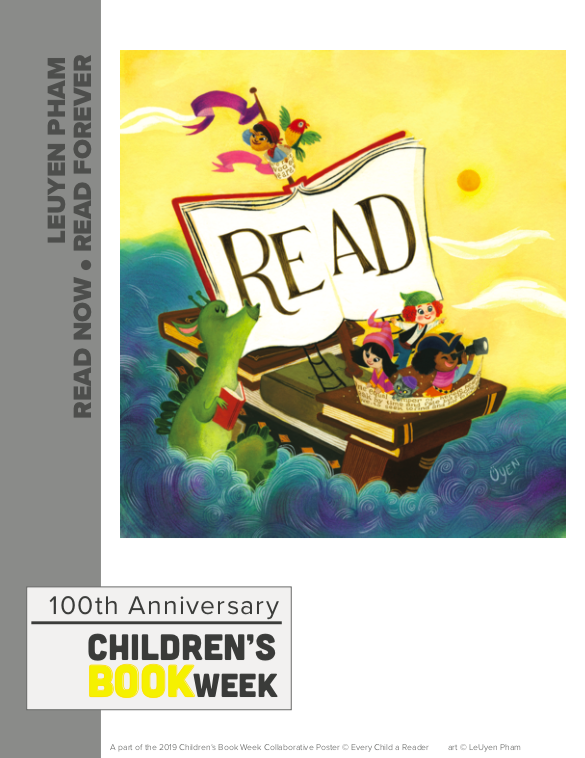 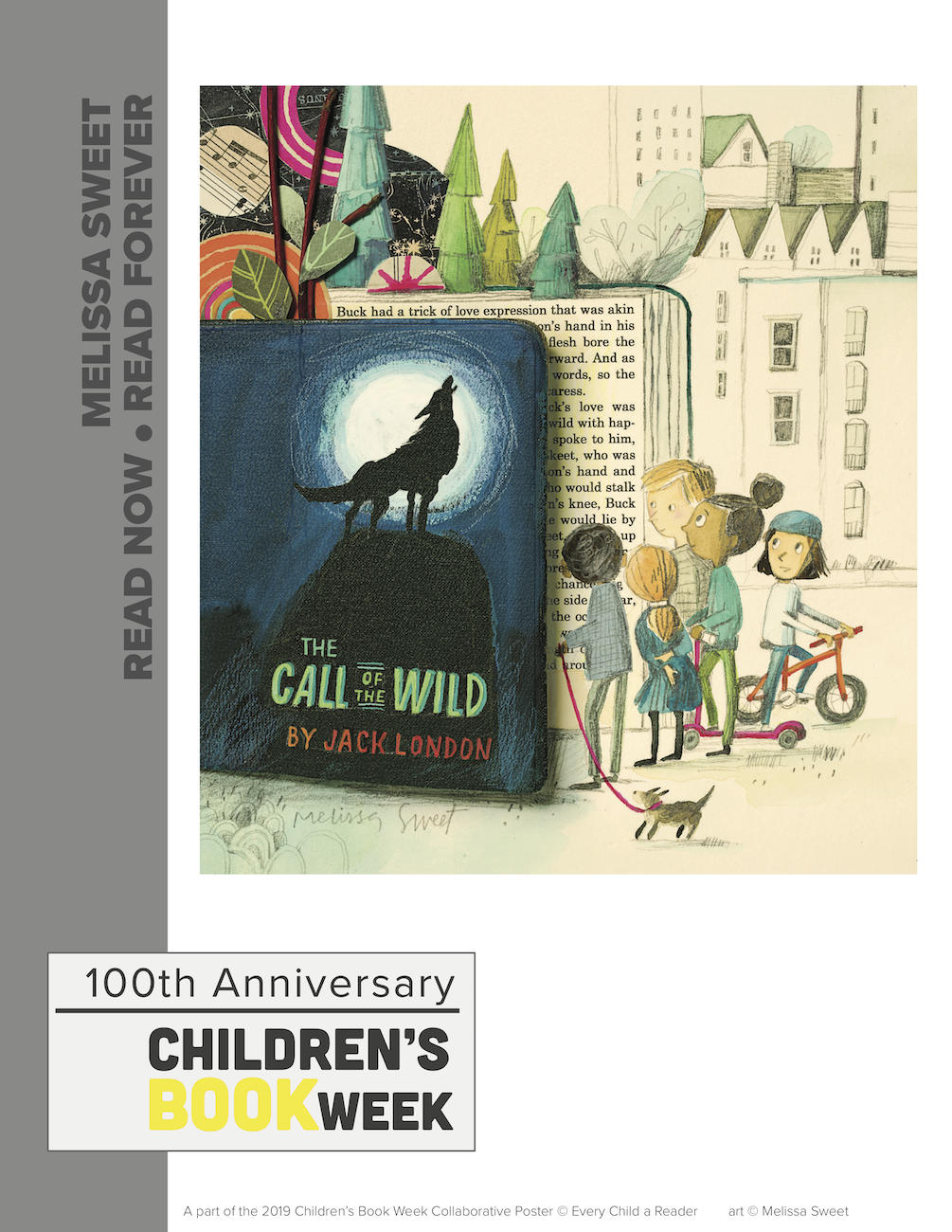 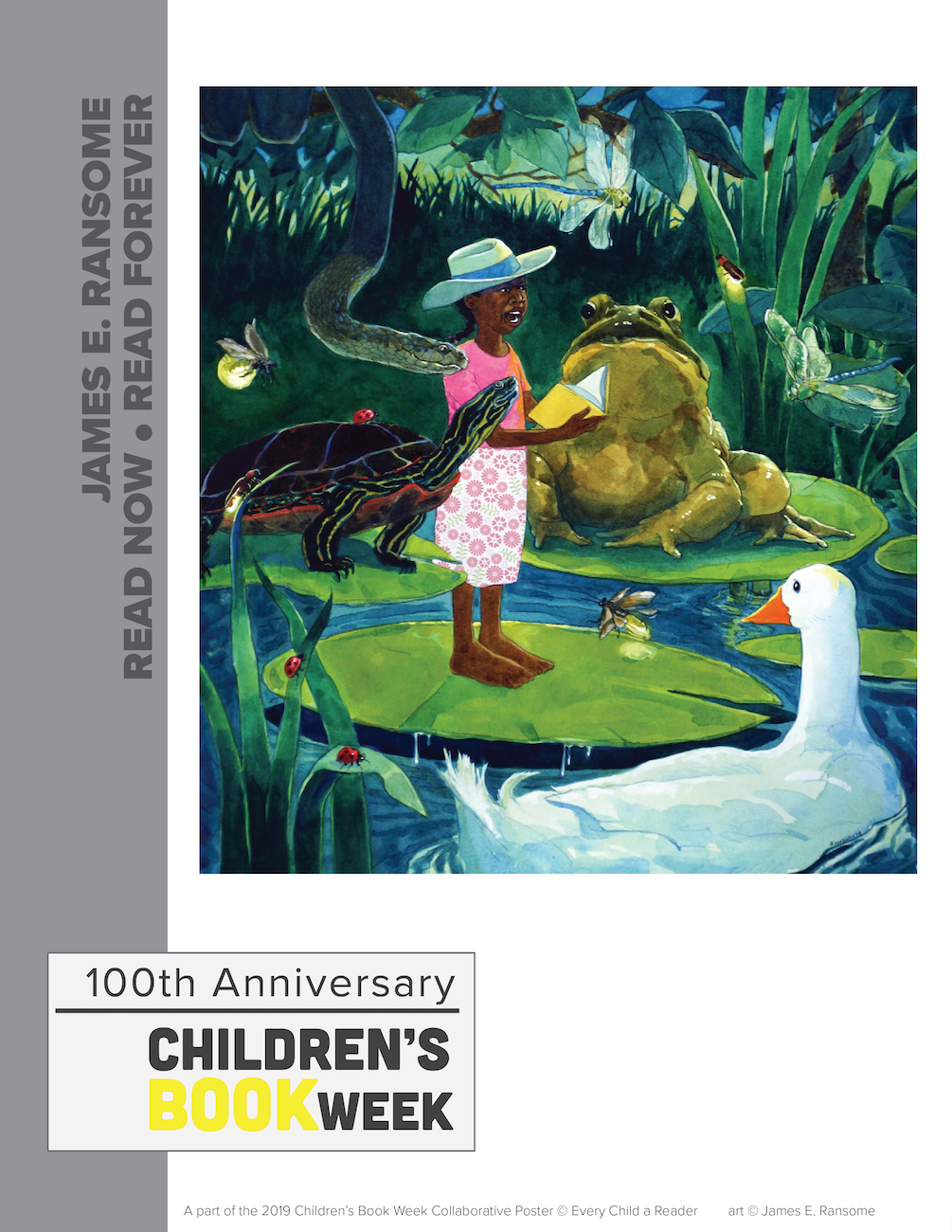 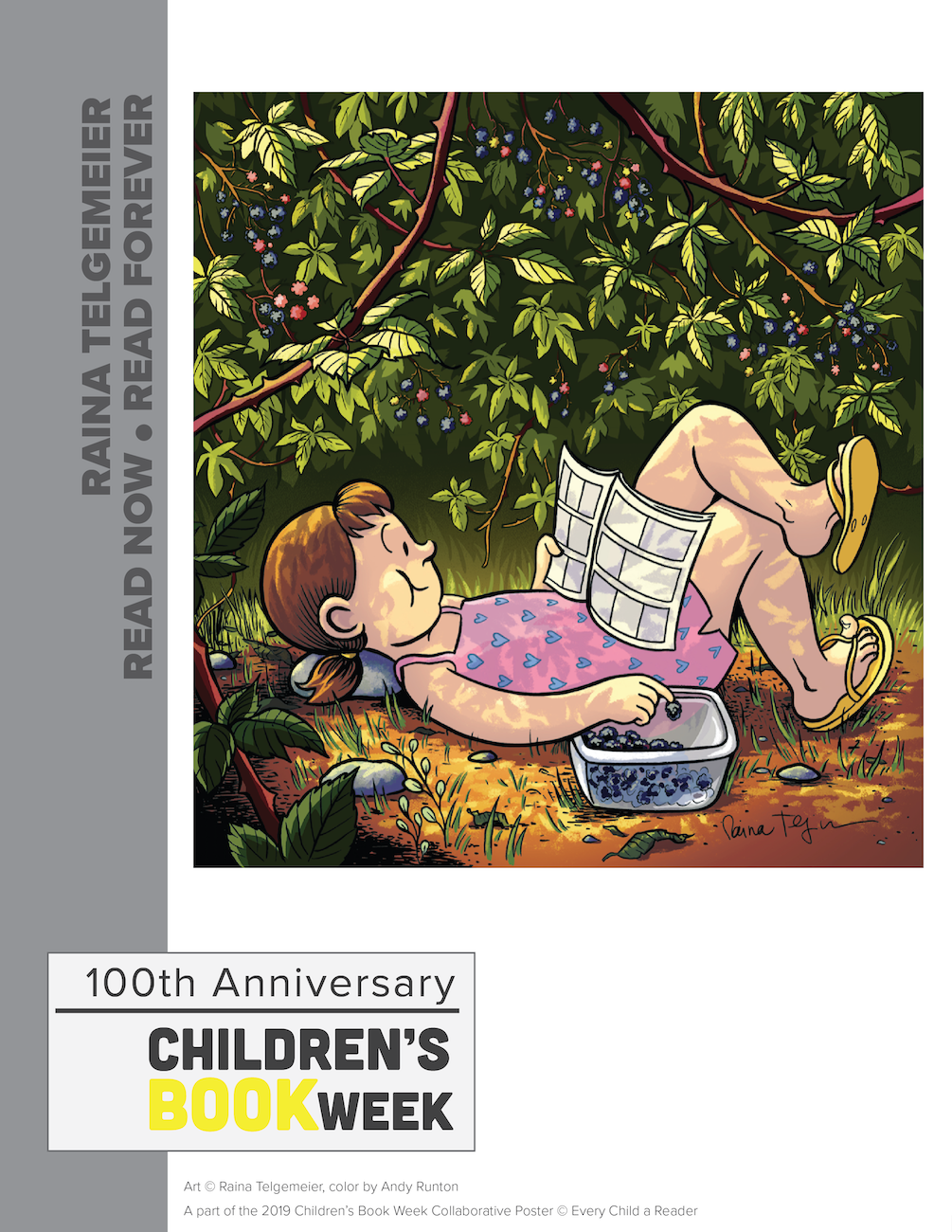 About the Collaborative Poster creators

Sophie Blackall (Little, Brown Books for Young Readers)
Sophie Blackall is the illustrator of many acclaimed picture books, including Finding Winnie and Hello Lighthouse as well as a number of beloved novels, including the series Ivy and Bean and The Witches of Benevento. She lives in Brooklyn, New York.
@sophieblackall (Twitter & Instagram), Facebook

Eric Carle (Penguin Young Readers)
Eric Carle is acclaimed and beloved as the creator of brilliantly illustrated and innovatively designed picture books for very young children. His best-known work, The Very Hungry Caterpillar, has eaten its way into the hearts of millions of children all over the world and has been translated into more than 64 languages and sold over 50 million copies. Since the The Very Hungry Caterpillar was published in 1969, Eric Carle has illustrated more than 70 books, many bestsellers, most of which he also wrote.
@ericcarle (Twitter), @officialericcarle (Instagram), Facebook

Grace Lin (Charlesbridge)
Grace Lin is the author and illustrator of more than twenty books for children, including A Big Mooncake for Little Star, the Newbery Honor Book Where the Mountain Meets the Moon, the Geisel Honor Book Ling and Ting: Not Exactly the Same!, and The Ugly Vegetables. She is also the co-author and illustrator of Our Seasons. She lives in Massachusetts.
@pacylin (Twitter & Instagram), Facebook

Juana Martinez-Neal (Candlewick Press)
Juana Martinez-Neal was awarded the 2019 Caldecott Honor and Ezra Jack Keats New Writer Honor for her author-illustrator debut Alma and How She Got Her Name. She also illustrates books for children, including Pura Belpré Award winner La Princesa and the Pea and two new 2019 picture books Babymoon and Fry Bread. Juana was born in Lima, the capital of Peru, and now lives in Arizona.
Visit her at juanamartinezneal.com.
@juanamartinez (Twitter), @juanamartinezn (Instagram), Facebook

Barbara McClintock (Scholastic)
Barbara McClintock has written and/or illustrated over forty distinguished books for children, including My Grandfather’s Coat, retold by Jim Aylesworth, which received three starred reviews, and her own highly acclaimed Adele and Simon books. Her books have five times been named New York Times Best Illustrated Children’s Books. She has received a Boston Globe-Horn Book Honor, as well as a myriad of other awards and honors. Barbara lives in Connecticut with her family and two very graceful cats.
@barbaramcclintockart (Instagram), Facebook

Frank Morrison (Bloomsbury Children’s Books)
Frank Morrison works as a fine artist and is the award-winning illustrator of many books for children, including I Got the Rhythm, Our Children Can Soar and Jazzy Miz Mozetta, for which he won the Coretta Scott King-John Steptoe Award for New Talent. Frank lives in Atlanta, Georgia, with his wife, author Connie Schofield-Morrison, and their five children. Visit him online at www.morrisongraphics.com.
@frankmorrison (Instagram), Facebook

LeUyen Pham (Disney Publishing)
LeUyen Pham is the bestselling illustrator of many books for children, including Grace for President by Kelly DiPucchio, the Vampirina Ballerina series by Anne Marie Pace, and the Princess in Black series by Shannon and Dean Hale. LeUyen has also written and illustrated her own works, including Big Sister, Little Sister and The Bear Who Wasn’t There. She lives with her husband and two sons in Los Angeles. Visit leuyenpham.com to learn more.
@uyenloseordraw (Instagram), Facebook

James E. Ransome (Holiday House)
James E. Ransome’s numerous accolades include a Coretta Scott King Medal (which he won for The Creation), two Coretta Scott King Honors, one of which was awarded for Before She Was Harriet, and an NAACP Image Award. He lives in upstate New York with his wife and collaborator, writer Lesa Cline-Ransome.
@jransomillustr (Instagram), Facebook

Erin Stead (Random House Children’s Books)
Erin Stead is the illustrator of eight highly-acclaimed picture books: the Caldecott Medal–winning A Sick Day for Amos McGee; The Purloining of Prince Oleomargarine; Tony; And Then It’s Spring; Bear Has a Story to Tell; Lenny & Lucy; If You Want to See a Whale; and The Uncorker of Ocean Bottles. She lives in northern Michigan with her husband, author/illustrator Philip Stead. Visit Erin online at erinstead.com.

Melissa Sweet (Eerdmans Books for Young Readers)
Melissa Sweet is the author and illustrator of many children’s books, from board books to nonfiction titles. She wrote and illustrated the New York Times bestseller, Some Writer! The Story of E. B. White, as well the Sibert Medal-winning Balloons Over Broadway, and illustrated two Caldecott Honor books: A River of Words and The Right Word: Roget and His Thesaurus, both by Jen Bryant. When she’s not in her studio, Sweet can often be found riding her bicycle with her dog Ruby, in Portland, Maine.
Facebook