As an annual tradition of Children’s Book Week, one children’s book illustrator is chosen to create a bookmark which celebrates children’s books and reading. This year, in keeping with the theme of One World, Many Stories, we asked four artists to contribute their beautiful and inspiring artwork. These bookmarks are available to print and distribute to children and teens and booklovers everywhere! 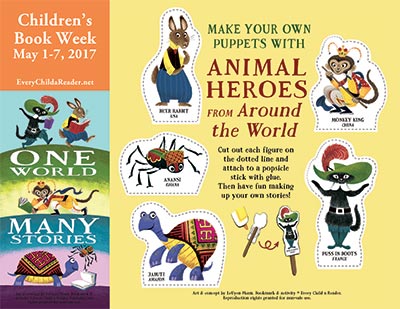 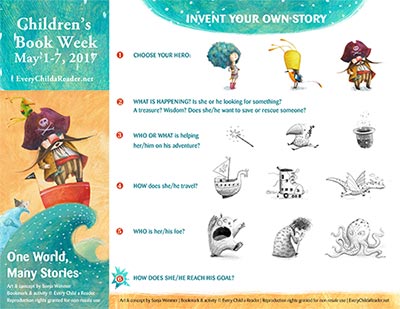 Ekua Holmes (Candlewick Press) is a fine artist whose work explores themes of family, relationships, hope, and faith. The first children’s book she illustrated is Carole Boston Weatherford’s Voice of Freedom: Fannie Lou Hamer, Spirit of the Civil Rights Movement, which was a Caldecott Honor Book and a Robert F. Sibert Honor Book and for which she also won the John Steptoe New Talent Illustrator Award. Ekua Holmes lives in Boston.

Yuyi Morales (Macmillan Children’s Publishing Group) is an author, artist, and puppet maker and was the host of her own Spanish-language radio program for children. She has won numerous awards, including the Jane Addams Award, five Pura Belpré Medals and three Pura Belpré Honors, and a Caldecott Honor for Viva Frida. She divides her time between the San Francisco area and Veracruz, Mexico, where she was born.

LeUyen Pham (Scholastic Inc.) is a New York Times bestselling illustrator and has published over 80 books for children, including the Princess in Black series, by Shannon and Dean Hale, Grace for President, by Kelly DiPucchio, Freckleface Strawberry by Julianne Moore, and Hats Off To You! by Karen Beaumont. Her own books include The Bear Who Wasn’t There and A Piece of Cake. She lives in sunny California with her husband (who is also an artist) and two young sons. You can visit her at www.leuyenpham.com.

Sonja Wimmer (NubeOcho)
Sonja loves painting pictures and telling stories. After studying and working some years as a graphic designer in her hometown Munich and Brussels, she decided to pack her suitcase and move to Barcelona to study Illustration at the “Llotja” Arts and Crafts School. Since then she lives between brushes and all kinds of wonderful tales, working as a freelance illustrator for publishing houses and other clients around the world. Over the last years various of her books have been published in the United States including The Journey of Captain Scaredy Cat and Bogo, The Fox Who Wanted Everything (A JLG Selection), both available in English and Spanish from NubeOcho. Her fans have a new title to look forward to this fall 2017, A Surprise For Mrs. Tortoise, also from NubeOcho.